I am delighted to announce the publication of the third BBB campaign supplement: "Bloody Big Battles in INDIA!" (BBBI), by Dr Mark Smith. This covers the Second Maratha War (1803-1806) where Wellington made his name; the Gwalior campaign of 1843; the Sikh Wars; and the Indian Mutiny. 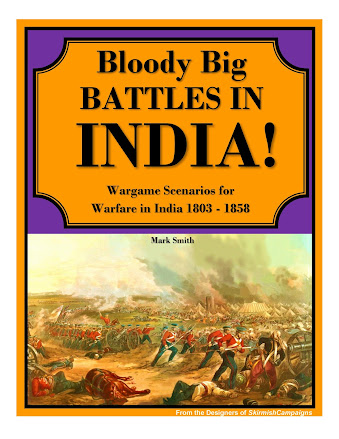 From helping Mark to playtest these sixteen scenarios, I can report that they are super games. The asymmetrical armies make for interesting tactical challenges (how best to use camel-mounted rockets ... ?). So too do the situations, e.g., protecting baggage against marauding cavalry, or the unusual cityfight in Lucknow. Furthermore, Mark writes very nice clean unfussy scenarios with well-designed objectives. I've provided the full back cover 'blurb' and a list of the battles included at the foot of this post. To get a flavour of the scenarios in the book, here are a few battle reports: Delhi (1803); Argaum (1803); Laswari (1803); Maharajpore (1843); Punniar (1843); Aliwal (1846).

The book is published by SkirmishCampaigns. It should be available from all SC's usual retailers shortly - shipping out this week or next, I think - but let me give a special shout out to North Star Military Figures, who snapped up a big order within 30 seconds of hearing about BBBI! (At time of writing, not yet listed on their website, but drop them a line if you want a copy.) BBBI joins the two existing BBB campaign supplements: "Bloody Big EUROPEAN Battles!" (BBEB) and "Bloody Big BALKAN Battles!" (BBBB). The fourth is in press and will appear later this year: "Bloody Big HUNGARY '48 Battles!" (BBHB). A couple more collections are in fairly advanced preparation as well, so expect more BBB books in 2023.

Thank you to everyone involved: Mark for all his hard work and skill in creating such a fine collection and introducing me to these wars about which I knew very little; our merry group of playtesters at OWS; Scott at SkirmishCampaigns; all the retailers who carry the BBB books; and, of course, the 1,000s of you out there who read this blog, or are members of the BBB group or Facebook page, and whose shared enthusiasm for this period is what really keeps the BBB project going.

[From the back cover of BBBI]

The major states of India, especially the Maratha Confederacy and the Sikh state in the Punjab, were among the most redoubtable opponents of the extension of British power in the sub-continent. The size and technological sophistication of their forces posed major problems for East India Company commanders in the field and frequently threatened them with defeat. BBBI lets you refight sixteen of the most important battles of the period from the Second Maratha War (1803-1806) to the Sepoy Uprising (‘Indian Mutiny’) of 1857-1858. This collection gives you:

·       The battles where Wellington made his name!

·       A wide range of terrain and tactical situations!

·       An engaging game of constant decision-making!

Many also offer scenario options to explore ‘what-ifs’ and increase replay value. Campaign options allow players to link battles so that each has consequences for the next.