With his India scenario book newly published, Mark changed continents and took us to Africa. We turned up at his war room to find a splendid, striking layout awaiting us. On an arid plain dotted with palm trees, in the angle of the Blue and White Nile rivers, a line of entrenchments protected a cluster of white buildings: Khartoum! 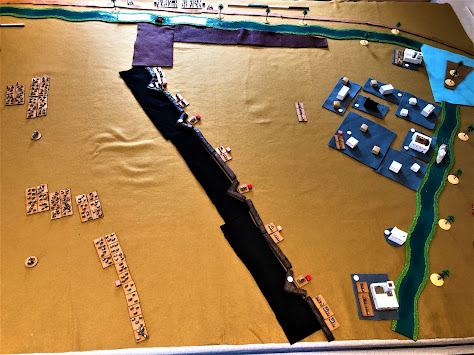 The baking Sudanese sun shines on the golden vista of Khartoum. Mahdist hordes approaching from the left, about to assault the line of obstacles and entrenchments between them and the city. More pics at foot of post.

For any who don't know the background: Major General Charles Gordon ("Chinese Gordon") was sent to help the Egyptian government against the Mahdist revolt in the Sudan. He was supposed to evacuate Khartoum but instead chose to defend it. He held out for almost a year; a British relief force was sent and arrived just two days too late, after the Mahdists had stormed the city.

Dave and Bruce took charge of the Mahdist hordes. I was given the role of Gordon, commanding a mixture of tough Sudanese troops, nervous Egyptians, and assorted irregulars and desperate armed citizenry.

The attackers' numbers should mean the defenders are probably doomed, so the scenario is a race against the clock: the Mahdists have just 8 turns in which to overrun the entrenchments (which include 4 bastion objectives) and take enough of the vital locations beyond (forts, barracks, arsenal/cathedral, palace, town sectors) to achieve a total of 7 for a draw or 8 for victory.

Historically, a fall in the river's waters left a gap on the flank of the entrenchments. The scenario reproduces this faithfully. The key to the assault is how fast the Mahdists can swarm through that gap (though they will need to assault frontally elsewhere as well). In our first go at the scenario, Dave's warriors got bogged down there for a couple of turns too long. Between that and the fact that (as we subsequently agreed) Mark had slightly overrated the strength of the defences and slightly underrated the Mahdists' determination, the assault was defeated.

We then fought it a second time with said adjustments. This produced a much more finely balanced game. Despite an active and well-commanded defence and galling enfilade fire from the defenders' gunboat, the Mahdists broke through and past the entrenchments, across the open ground, and rampaged into much of the city. On the last turn, so many objectives were in charge range that the Mahdists' total could have reached 10 if everything went their way. As it was, when time ran out, there were precious few defenders remaining apart from Gordon, wrestling with his conscience over whether it would be a mortal sin to blow himself up along with the arsenal ... but the attackers had only taken 7 objectives, one short of a draw. Victory for Gordon!

The aesthetic matters. It's such an important part of the HQGE. Mark's table was stunning just because it was so different from our usual green tables; his armies looked great; details like the gunboat added to it.

City assaults can be fun! I tend to be leery of straight assaults as they sometimes offer very limited options for either attacker or defender and it becomes a mere dicefest. In this scenario, though, both sides had plenty of choices to make and there was loads of manoeuvre.

Learning by doing: I knew virtually nothing about this battle beyond the fact that it had happened and that Gordon didn't make it. The character and shape of the action are now vividly imprinted on my brain.

Exotica add flavour. Gordon had his gunboat, some Gatling guns, and an armoured barge full of riflemen; the Mahdists had camelry.

Fast and furious! We fought this through in its entirety twice in under four hours, with a proper nail-biter finish second time round.

Have I mentioned before that asymmetric armies make for good games?

And the rest is the annotated photos: 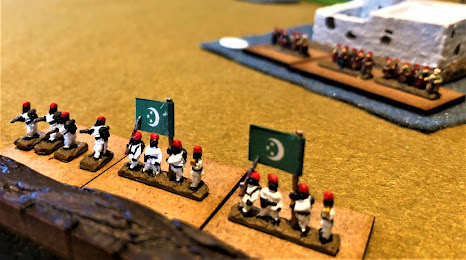 The veteran Sudanese present a striking appearance in their white uniforms and red fezzes as they defend the entrenchments. They are backed up by rather less impressive bashi-bazouks in a fort.

The opposition: the massed Mahdist left wing with its gaudy banners.

And a closer look. The 'fuzzy-wuzzy' spear-chuckers at the back only have hand-to-hand weapons, but about two thirds of the Mahdist infantry are armed with modern breechloading rifles captured from the Egyptian army. 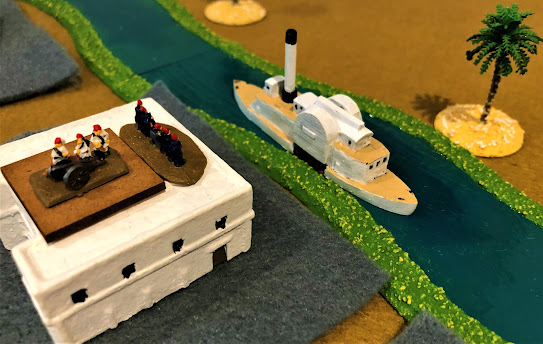 Gordon and his staff sip gin next to the 20-pdr gun mounted on the roof of the palace and admire their river gunboat. Historically this played no part in the actual battle as key personnel prudently made themselves scarce, but the scenario allows a chance of it coming into action. 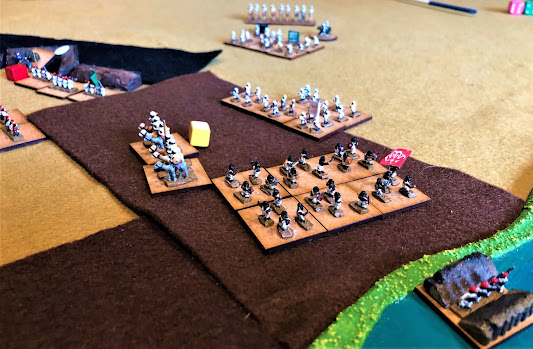 Game 1: Dave's left hook bogs down in the mud next to the Nile. Bottom right is the armoured barge moored in the river to protect the flank of the entrenchments. The camels refused to move any further, in fact next turn the unit rolled snake-eyes and disintegrated - as Dave said, 'got the hump'. 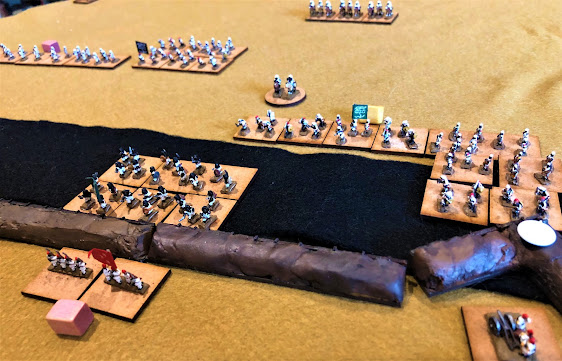 Waves of Mahdists tried repeated frontal assaults without success across the slightly too powerful defensive belt of broken glass and mines. 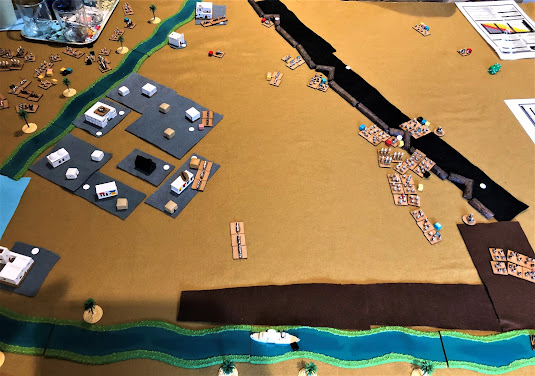 End of Game 1: the Mahdists have finally overwhelmed the right half of the entrenchments but are nowhere seriously threatening the city, which is still defended by a thin line of Egyptians and Sudanese. Blue markers show that half of the Mahdist units are spent. 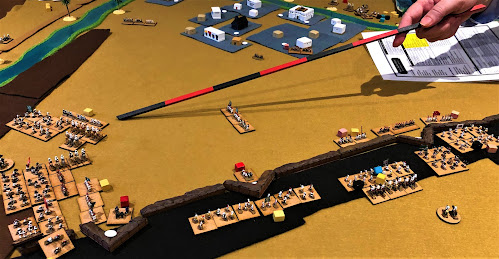 Game 2. This time the Mahdist left wing has piled through rather more swiftly and in force. Not having it all their own way, though, as the pinning frontal assaults are repelled with heavy loss. 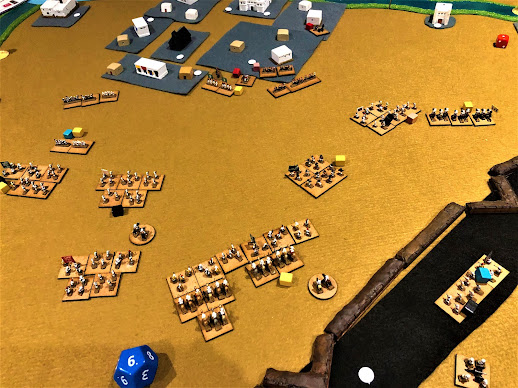 Turn 6 of Game 2 and the Mahdists are rampant. The few defenders along the edge of Khartoum look distinctly beleaguered. The remaining two turns would see them even more beleaguered and even fewer in number as the Mahdists swarmed into the barracks (top right) and two of the town sectors - not quite enough to prevent a victory for Gordon (albeit still only a moral one).