If you pay any attention to this blog at all, you'll already know that my major obsession for the past several years has been the Hungarian War of Independence of 1848-1849. Search by the labels "Hungary", "1848" or "1849" and you will find dozens of battle reports, etc, relating to it. 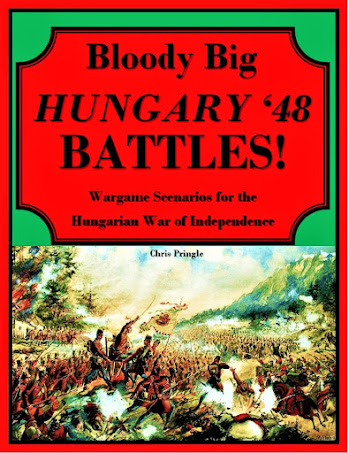 Now I'm adding one more such post to mark the publication of the resulting campaign scenario book, "Bloody Big HUNGARY '48 Battles!". To quote the back cover blurb:

"The Hungarian War of Independence was the largest and longest of the conflicts arising from Europe’s Year of Revolution in 1848. It lasted a year, saw half a million troops engaged, and generated dozens of significant engagements on three major fronts. Dedicated research now makes this neglected conflict accessible to wargamers. BBHB lets you refight sixteen of the most important battles of the war! Each scenario gives you:• A clear and accurate historical situation• New decisions for both sides every turn• Simple but ingenious victory conditions• A battle you can fight to the finish in an evening• A great game that will ebb and flow to the end!Most also offer scenario options to explore ‘what-ifs’ and increase replay value. Campaign options allow players to link battles so that each has consequences for the next. BBHB is a scenario book for use with the “Bloody Big Battles” wargames rules (BBB)."

I should also note that, like the previous BBB scenario book ("Bloody Big Battles in INDIA!"), the maps are in full colour throughout (as are the flags, illustrations, etc.).

The book is or will shortly be available from the usual retailers who carry BBB. I believe the main ones are listed on the SkirmishCampaigns website here. (Before you ask - sorry, no pdf edition at this time, just the lavish full-colour print.)

If you're interested not only in wargaming the battles but also in learning more about this large, protracted and fascinating conflict, I commend to you my translations of the two Austrian semi-official histories covering the two halves of the war:

One of the things many of us wargamers have missed over the last three years has been gathering at conventions. My excursion to Joy of Six in July was my first show since 2019. Pre-pandemic, the annual Colours wargames convention in Newbury was an important fixture in my calendar. I was therefore happy to see it return this year - doubly so that the organisers took the smart decision to throw the doors open and make entry free to ensure a good turnout for the traders. A huge thank you to all involved in making Colours happen. Well done.

My own contribution was to help run one of the display/participation games, as I last did back in 2016, I was surprised to find. Ours was as obscure as they come: Pákozd (1848), the opening skirmish of what was to become the (unsuccessful) Hungarian War of Independence. The reason for our choice was to help announce the imminent publication of the next BBB campaign supplement, "Bloody Big Hungary '48 Battles!", coming soon to all good bookstores. 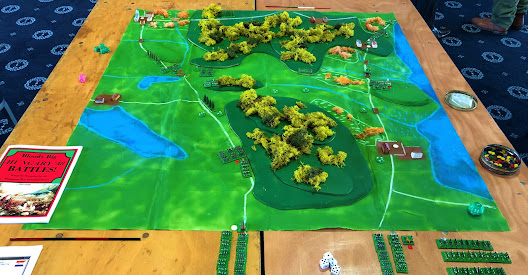 For a thorough report of the whole show, with lavish photos, see Steve J's "Wargaming Addict" blog, excellent as always. Here's just one token photo of our game. A humble 4'x4' mat with 6mm figures, not aspiring to the same heights of craftsmanship as some of the spectacular 28mm scale works of art alongside it, but rather endeavouring to show what is easily feasible for the average gamer with limited time and space who still wants to fight an entire battle in an evening.

I won't say much about the game itself - the scenario has been reported before in the PS to this post - beyond noting that we ran it to conclusion twice, with novice participants, and at a leisurely pace while interacting with passing punters.

And what a lot of punters passed, or rather, stopped to chat, comment, enquire, admire, and play! Remote gaming is all well and good but for me, at least, wargaming is very much a social activity, and it was incredibly stimulating to meet so many fellow gamers. The day was a blur and I talked myself hoarse. Barely managed to do a quick lap of the other games (such beautiful work on display) and a hasty squint at a couple of the trade stands (sorry I couldn't spend more dosh with you guys!) and down a much-needed pint with my oldest mate. I can't remember everyone's name and never even got to ask in some cases - maybe next time the organisers could give everyone a sticky label to write names on? I therefore won't name individuals here. But I was pleased to meet some luminaries of our hobby (magazine editors, noted authors, rules writers, esteemed bloggers, and the like); old friends from many a game or convention in the past; fellow forum frequenters whose names were very familiar but whom I had not met before in person; fellow enthusiasts for the period, or the scale, or the rules, or just the hobby in general; a nice Hungarian couple who were surprised and delighted to see their nation's struggle represented on the tabletop (Gábor, let me know your website!); and especially all our new friends who were excited enough to join in the game and get a taste of BBB.

All these good people added up to a long full day of almost non-stop nattering, ending up exhausted but euphoric. Well worth it!

In conclusion, then: the eye-candy of gorgeous games is nice; the chance to try new games is nice; the chance to look up close at (and buy) some of the models and figures we've seen on the web is nice; but really, wargames shows are about the interactions of all kinds with fellow gamers. It's the people that make the show and the people that make the hobby. Ladies and gentlemen, it was a pleasure to meet you all last Saturday and I hope to see you again at another show soon!

On which note, you might want to mark the weekend of 1-2 July 2023 in your diaries. Sunday 2 July will be the date of the next Joy of Six in Sheffield, the 6mm convention run by Baccus. With Baccus's blessing and the generous support of the Leeds wargames club, we plan to hold the next BBB Bash Day the day before, Saturday 1 July 2023, in Leeds. We hope this double draw will attract lots of you to Yorkshire for an epic wargames weekend! To see what to expect, reports of previous Bash Days are here.

Update 12 October 2022: our Colours game got a nice write-up on p20 of  "The Foreign Correspondent" issue 136 (October 2022). Many thanks to Ralph Weaver. FC is the newsletter of the Continental Wars Society. If you're interested in learning more about CWS and perhaps joining to receive FC, contact:

Or if you are in the US: