This week we fought the third battle in our Hungary 1848 campaign, following on from Pakozd and Schwechat: Hermannstadt. Nowadays, Hermannstadt is the city of Sibiu in Romania; back then, it was the southern capital of the Austrian province of Transylvania (the northern one being Klausenburg aka Cluj). 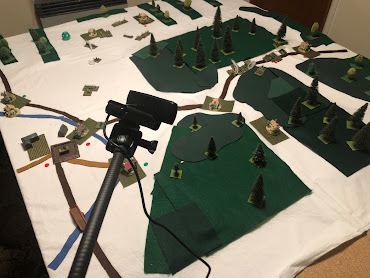 Snow-bedecked Transylvania, as observed by the all-seeing eye of my new webcam-on-a-stalk.
Game end: the Austrians have advanced from Hermannstadt (centre left) north up the valley road to take Stolzenburg (upper right) as well as overrunning Salzburg (top centre).

In the Hungarian War of Independence, the operations in Transylvania were largely independent of events in Hungary proper except for occasional transfers of troops between the two theatres. The veteran Polish revolutionary, Jozef 'Papa' Bem fought a brilliant campaign in which his audacious lightning manoeuvres were reminiscent of the young Bonaparte in 1796, expelling the Austrians from Transylvania and then keeping multiple invading columns at bay until late in the war.

Over the course of a couple of weeks in January/February 1849, Bem fought a series of actions around Hermannstadt. His initial attempt to take the city failed and he fell back to Stolzenburg (Slimnic). The Austrians brought up reinforcements and attacked him but were repulsed. Bem then took most of his army west to open the way for a division coming from Hungary to reinforce him. He left his 2ic, Czetz, entrenched around Salzburg (Sura Mica). When the Austrians attacked again, the small Hungarian force was overwhelmed.

I set myself an ambitious challenge: to capture these three connected actions, spread across two weeks and an area 10 miles square, in a single playable scenario that was effectively a 'micro-campaign'. The result was a game of 11 turns split into three days, with two Night Intervals in between. Unsurprisingly, a first playtest proved abortive: a combination of a good Hungarian plan, a poor Austrian one, some bad luck, some undergunning of the Austrian defences by me, and a 'sudden death' scenario victory condition resulted in a one-sided game and an early finish.

After rejigging the scenario, we tried it a second time with a different set of players, with much better success. The Hungarians still managed to exploit their historical initial advantage and achieved a good 'high tide', capturing two of the three Austrian outpost positions. Once the Austrians were reinforced for 'Day 2', rather than fall back to defend high ground as historically, the Hungarian players continued to press, hoping either to take another outpost or at least to keep the Austrians at a distance from the Day 3 objectives.

After Day 2 there was a major reset as the Austrians received still more reinforcements, while most of the Hungarian army quit the field. Both sides redeployed, the Hungarians falling back and constructing redoubts to defend objectives on the main axes, the Austrians pushing forward as far as they could. Before the redeployment, given the scenario time limit, we all thought the Austrians had little chance of taking the objectives they needed for a draw, let alone victory. As it turned out, it went right to the wire, with all three results possible on the last turn. The very last dice of the game decided it: an Austrian win!

- A surprisingly successful super-exciting finish to a see-saw game.

-  As is often the way, the 'Night Interval' resets and reinforcements/withdrawals changed the situation significantly and gave the players challenging decisions to make, both in anticipation and in reaction.

- Small numbers of units on the table mean a couple of lucky rolls can make a big difference, more so than in larger games where the dice are more likely to even out.

- Playtest, playtest, playtest! Especially unconventional scenarios like this, where cunning players will exploit loopholes in scenario special rules. Although this game went well, I'll tweak it and then we'll play it again.

- As it stands, the scenario requires reinforcement/withdrawal to reach a fixed number of units during the Night Intervals. Naturally, the players therefore regarded surplus units as expendable and were suitably aggressive accordingly. I need to change that to adding/removing a fixed number of units instead, so that the players cherish their little lead men's lives more.

- Since last game I invested in a webcam to make it easier for players to see what was going on. It provides a sharper picture and is easier to manoeuvre to show different parts of the battlefield. This did make a difference. (Logitech C920 HD Pro, if you're interested.)

- One of the guys hadn't rolled dice in August; I think another had only played two games in the last year. Getting together online for what turned out to be such an exciting game full of testing decisions made some battle-starved wargamers very happy.

The first draft of the scenario is in the BBB group files. It took us two 3-hour sessions to play online but would need half the time in person. Alert readers will notice that although the map in the scenario is 6'x4', the table is only 4'x4' - I realised all the action would be in the middle 4' so I lopped a foot off each end.

Hopefully one more playtest will be enough. I'll update this blogpost with the result. After that, the campaign action will move to the main front again and one of the biggest battles of the war: Kapolna.

PS If you're at all interested in the Hungarian War of Independence 1848-1849, you'll want this forthcoming book.

Update: as planned, we fought a further playtest, and had another dramatically see-sawing game. After the first day, the Hungarians looked doomed: they'd only taken one Austrian outpost, lost several battalions, their army was in tatters and defeat seemed inevitable. On day 2, confident Austrians surged in the centre but left themselves vulnerable to a desperate last-chance charge by Czetz on the Hungarian right. Improbably, this not only took a second outpost but exploited into a third in the Austrian rear, making Austrian victory technically impossible. Despite this, on day 3 the Austrians in turn swarmed forward again and came oh-so-close to overrunning the last Hungarian position to salvage a draw. Verdict from one of the Austrian players: "Is the scenario balanced? Not sure. Is it entertaining? Yes. Does it capture the tough choices for both sides? Absolutely." I reckon one last small tweak in the Austrians' favour and we're done.