I happened to spend Remembrance Sunday in Italy. We paused a moment here:

By unintended coincidence we observed another Italian remembrance this week. Dave T's grandfather served in the 27th Lancers and fell in the Italian campaign. In his honour, Dave researched one of the actions in which the 27th Lancers fought, and ran it for us as a Kampfgruppe Commander scenario: Assault on the Savio. It turned out that my own grandfather's unit was also involved, so I think both our grandpas were on the same wargame table last night.
This was a really interesting game, primarily because of the terrain. The situation is that three German divisions are trying to conduct a fighting withdrawal from the Doris Line and escape intact across the Savio river, pursued by Canadians and New Zealanders. The country is extremely flat - reclaimed marshland, I assume - and crisscrossed by a regular grid of roads and ditches, punctuated by little towns. The going off-road was very muddy. We soon realised that this channeled both sides' armour and it made for a kind of Nine Men's Morris with tanks. 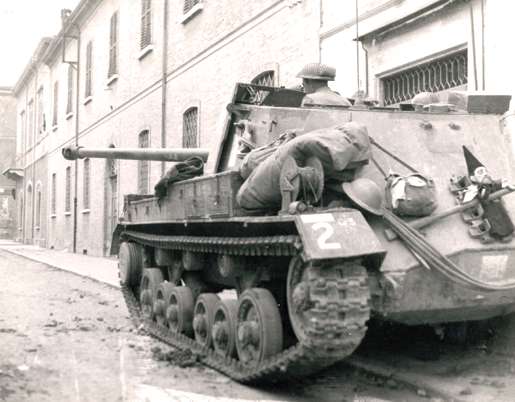 Canadian Archer at the Savio - from here

For us German players, the trick with the armour was to advance enough to threaten, snipe and delay, then withdraw before Allied armour and artillery could mass and pummel us. Meanwhile our paras and grenadiers made the Allies pay to take each town but pulled units out before they could get seriously chewed up. Our Panthers proved their potency against Shermans. We didn't lose any units entirely, and we slowed up the Allies enough to complete our withdrawal comfortably and still retain a foothold east of the Savio - a German victory.

We agreed afterwards that the Germans had probably got slightly too many tanks and command points, and the Allies need more command points and artillery. But this is minor tweaking. Overall it was a really excellent scenario and one that we would all like to play again. A big well done to Dave.

A couple of photos of the game here.
The main account Dave relied on is here.
[And now the scenario is posted to the files of the Kampfgruppe Commander Yahoo group here.]

My running total for the year:

Posted by ChrisBBB at 14:06 No comments: