It would be difficult to exaggerate my ignorance about the British conquest of India. I knew there were Maratha Wars, but I could not have told you there were three of them, and I would have struggled to pin any of them to the right decade. Apparently the First Anglo-Maratha War was 1775-1782 (when Britain was also busy with some other minor colonial scuffle elsewhere), the second in 1803-1805 - in which the future Duke of Wellington won some famous victories - and the third in 1817-1819.

Our game this week was the Battle of Delhi during the Second Anglo-Maratha War. This pitted some 4,500 East India Company troops against over three times their number of Marathas in an asymmetrical contest of quality vs quantity - often a promising start for a wargame scenario. The Maratha army was lined up just outside Delhi, southeast of the city. The British vanguard was encamped about five miles away. The Marathas surprised General Lake by advancing, obliging his cavalry brigade to conduct a fighting withdrawal while he brought up his infantry. Once his force was formed up, Lake attacked and routed the opposition. Delhi fell three days later. 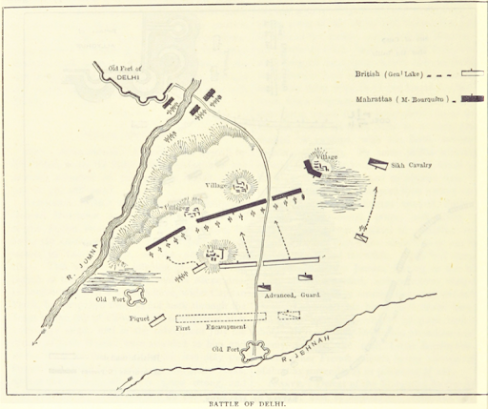 In our game, I took the part of the EIC and Mark J the Marathas. Our scenario designer, Mark S, hosted and umpired from his war room while we played remotely.

Mark chose to deviate from the history and hold in place, rather than attempt a coherent advance with his unwieldy army. The Maratha C-in-C and a number of regimental officers had recently defected. Consequently half their force was rated Passive and Mark had no Generals on table, making manoeuvre difficult for him. He formed a solid line punctuated by two batteries entrenched in front of two of the hilltop village objectives.

I was heavily outnumbered but needed to attack to win. The Marathas' numbers and artillery would give them an edge in a protracted firefight, but my troops' qualitative edge meant they should win most assaults. To get stuck in without risking being outflanked and swarmed, I opted for a pincer attack. My cavalry that started on table would move north around the Marathas' more distant left flank, staying at a safeish distance from Mark's guns, and threaten the ford behind them (an objective). Then as my infantry marched on, they would head for the Marathas right, with my best unit leading (His Majesty's 76th regiment of foot) and the Bengal Native Infantry (BNI) battalions following in echelon. Another point in favour of this plan was that the right wing of the Maratha army was its worst formation, the 2nd Compoo under Geslin, which was rated Passive as well as Fragile and would therefore find it difficult to react.

A taster snippet of the scenario

A cautious cavalry dance developed on my right. Colonel St Leger's dragoons and BNC probed for a worthwhile opportunity to charge, but I was wary of spending this potent force too early. The opposing Hindustani cavalry and Sikh gorchurra mercenaries were similarly leery of actual fighting and preferred to face us off and cover their infantry's flank.

Mark responded to the gap in my centre by sending successive units to probe towards my vulnerable encampment and baggage train. First a contingent of his cavalry advanced, only to scamper back when my most echeloned BNI moved to counter them. Next a brigade of 3rd Compoo pushed forward, engaging that BNI unit and my baggage guard in a tough fight. The BNI eventually won but at heavy cost. While that was going on, some gorchurras chanced their arm, but were blown away by a lucky long-range salvo from my cavalry's galloper guns.

My oblique order attack à la Frederick the Great against the Maratha right went almost perfectly. The 76th smashed the end enemy unit and wheeled right. With the supporting BNI also pushing back the next Maratha unit, my men were now enveloping the first of the fortified villages. This was the time to commit my cavalry, who charged the Maratha cavalry north of the second fortified village while more echeloned BNI attacked it frontally, taking advantage of the enemy guns having turned to face the cavalry and expended their ammo. The second village was carried!

The crisis of the battle had arrived (as Clausewitz likes to say). Mark threw everything into desperate counterattacks. In the centre, a Maratha brigade scorned the fire of the galloper guns and brushed aside my baggage guard to threaten my camp once more. Another brigade broke ranks to advance towards another objective village behind my lines. Every other unit he could muster charged my cavalry (disordered after their earlier charge) and my BNI in the captured hilltop village.

By rights, my cavalry should have been driven back or even destroyed. Instead, in the kind of moment beloved of our tournament-gamer comrades at OWS, I rolled a 6 and Mark a 1, so his counterattackers were put to flight. My cavalry were left free to seize another objective, which they did. My movement dice were kind. A reserve unit of BNI thwarted one of the Maratha thrusts in the centre. The 76th and the BNI stormed the remaining fortified village.

With that, the Maratha army was broken and the East India Company had carried the day. Delhi would certainly fall. Victory was mine.

However, it was by no means one-sided and indeed, a turn earlier a Maratha victory had looked entirely possible. A few dice falling differently would have left me with just one or two objectives rather than the four I needed to win or three for a draw.

- This was a thoroughly absorbing game (hence I forgot to take any pictures, sorry!). I found it very challenging and had lots of important decisions to make. On the other side of the hill, Mark didn't find it any easier than I did. When both commanders think they have a hard job, that's the sign of a good scenario.

- I've said it before, I'll say it again: asymmetry makes for a good game. Quality vs quantity is a great match-up.

- I sometimes find it really hard to know what to do with cavalry! Their manoeuvrability gives them so many options, the choice set becomes too large. On the other hand, they can be a one-shot weapon: even if they charge successfully, that leaves them disrupted and unable to evade, so if the enemy they defeated has some friends around, they're dead. An eternal conundrum.

- It's good to have a plan. This time I read the scenario thoroughly in advance, paid proper attention to the victory conditions, came up with a decent plan and executed it successfully. Nice when it works.

- 'Learning by doing' - I will remember this game for a long time. I probably increased my knowledge of the Maratha Wars in a much more enduring way than if I'd just spent three hours reading a book.

- The remote format generated the usual degree of fog of war, misunderstandings over distances and angles etc. Mark probably had the worst of this.

- Fortunes of war: as noted above, just two or three different dice would have produced a Maratha victory. The game was in the balance right to the end. Well played to Mark J who was a little unlucky to lose and made me work hard for the win. Super scenario.

- I think Mark S has just two or three more scenarios to finalise and then his "Wars in India" collection will be complete. The resulting set, covering the Maratha Wars, Sikh Wars, Gwalior Campaign and India Mutiny (and maybe more I've missed) should be published some time next year as a BBB campaign book.