Schleswig-Holstein shall be German! Isted (1850) photo-AAR

As I had the rare luxury of being a player rather than an umpire for once, and as I know some readers like full AARs, I am deviating from my usual summary AAR format to treat you all to a blow-by-blow battle report with plenty of photos and detail, albeit limited to what the webcam showed me.

This was a remote game hosted by Mark S in his newly extended study. To christen his new war room he ran Isted (1850), the major battle of the First Schleswig War. (We played this back in 2015, as recorded on TMP and as also fought by Steve ‘Wargaming Addict’ – see his AAR here.)

The situation is that diplomatic pressure has forced Prussia to pull out of the war, enabling Denmark to go on the offensive against the remaining Schleswig-Holstein forces. The asymmetric armies make for an interesting tactical challenge. The Schleswig-Holstein forces – let’s call them ‘Germans’ for convenience – have only one General (their C-in-C) and are Passive. This makes them much less agile than the Danes, whose C-in-C gets three subordinate Generals. Fortunately for the Germans, they are on the defensive so have less need to move, and they have a larger proportion of rifle-armed troops than the predominantly musket-toting Danes. Furthermore, a quarter of the Danes are raw conscripts. 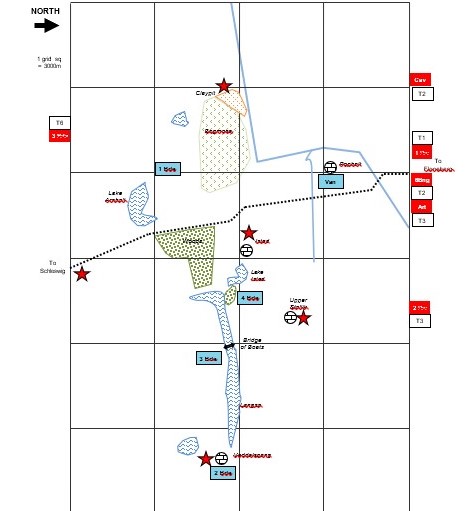 Map from Mark's BBB scenario for the battle

I took charge of the Danish 1st Division alongside Mark J commanding our 2nd Division. Crispin took the part of the German C-in-C, LtGen Karl Wilhelm von Willisen. (Incidentally, Willisen was a serious military theorist, writing four volumes on ‘Die Theorie des grossen Krieges’. He is little known nowadays. This may be because his writings are less incisive than Clausewitz’s; or it may be because he lost the First Schleswig-Holstein War.)

As the scenario already stipulated dispersed arrival times and destinations for the Danish forces, Mark and I did not put as much effort into our plan as we might have, beyond agreeing we would try to exploit our superior agility by moving into gaps between enemy formations, avoiding his artillery, and seeking opportunities for converging assaults. In retrospect we should perhaps have paid more attention to prioritising objectives.

Still, it all seemed to go OK initially. This first photo, German Turn 1, shows the German vanguard from the Danish point of view. The first Dannebrog flag is just visible waving at bottom of picture as my 4th and 5th Brigades avoid frontal assault, preferring to march around the German left towards the Claypit objective. Willisen has committed his reserve artillery which is straggling up the road to guard Isted.

On Turn 2 I was able to get 5th Brigade onto the flank of the vanguard, while 4th Brigade got in range of the Claypit and the Bogmose marshes. However, the defenders’ fire took a toll of my gunners, so my artillery support was delayed in deploying.

The Danish Guards also arrived on Turn 2. By Turn 3 they had pushed forward to get into a firefight with the other end of the German vanguard. Unfortunately their supporting conscripts were rather tardier leaving the start line.

Danish T3: Guards and Jaegers advance in the centre against a solid German line in front of Isted. Formidable German reserve artillery deployed astride the road in grand battery. Yellow 'cheeses' indicate units disrupted in the firefight. The dreaded 'Danish Blue' cube means a Spent unit.

On Turn 3 the Danish 2nd Division marched onto the table on the left wing. A couple of German units had begun moving forward from behind the Langsø lake. Our 2 Div had a chance to jump on either or both of these with superior numbers, but the movement rolls let us down.

I had no time to take photos of Turn 4 as the action hotted up all along the line. On our left, 2 Div lined up against German 2nd and 3rd Brigades who were able to deploy in front of Veddelspang and Upper Stollik in time and keep our valiant Danes at bay with their longer-ranged rifles. The fabled Danish espingol machineguns did some damage but barrel changes and German counter-battery fire limited their impact.

In the centre, the convergent attacks from our 5 and 6 Bdes combined with the newly arrived reserve artillery to blow large holes in the German vanguard and 4th Brigade. However, they were able to fall back on Isted and on their own freshly deployed gun line and reply in kind.

On our right, Colonel Thestrup nimbly pre-empted the German 1st Brigade and seized the Claypit.

I moved our tiny cavalry force up the extreme righthand table edge but was guilty of indecision, letting it loiter there for several moves before dashing round into the enemy rear, and then choosing the wrong target in the end … of which more later.

The next shot shows the situation at the end of Turn 5 from behind the Danish centre, where the Guards’ assault has stalled in front of Isted (which would become a theme of the remaining moves). Black and yellow cubes show they are Low on Ammo and Disrupted. They are enfilading a Spent German unit (blue cube). Further to the right another such faces a similarly Spent Danish conscript unit. The deadly German gun line can be seen astride the road where it can defend Isted and command the Bogmose. Our gun line is out of shot astride the road to the right, a little too far away to bombard Isted itself. In the distance on the right is what became a protracted struggle for the Claypit. Beyond that the Danish cavalry are silhouetted against a murky grey foggy Danish sky.

Situation at end of T5, view from Danish centre.

By Turn 6 things had got messy and bloody on our left. Mark was endeavouring to manoeuvre his 2 Div into gaps in the German line, per our plan. The German defenders of Veddelspang responded by sallying to beat up one of his regiments, which enabled another Danish unit to seize the village behind them. Our situation in front of Upper Stollik was less rosy as German rifles inflicted steady attrition.

German T6 on the Danish left. Upper Stollik in centre of photo; Veddelspang behind it in the distance.


During Turns 7 and 8, fortune turned against us on our right. Some sorry dice meant my attempt to press Col Thestrup’s advantage in the Bogmose failed. However, I did manage to race our cavalry around into the German rear. Our 3rd Brigade had also arrived from its flank march on T6 and was now astride the German line of communications. 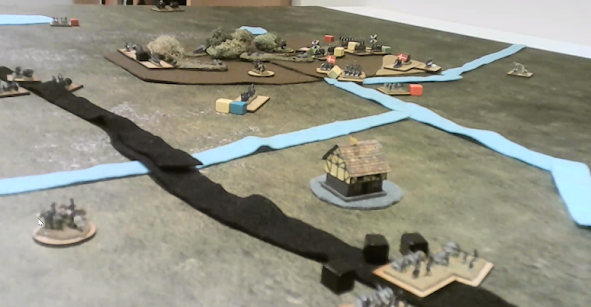 Danish T7 – our assault in the bog bounces off. Our own grand battery in the foreground. Black cubes = Low on Ammo, having just blasted a German regiment into inconsequentiality.


The Germans then exploited our repulse in the Bogmose to storm the Claypit. Thestrup’s best regiment was now spent and had no prospect of retaking that precious objective. 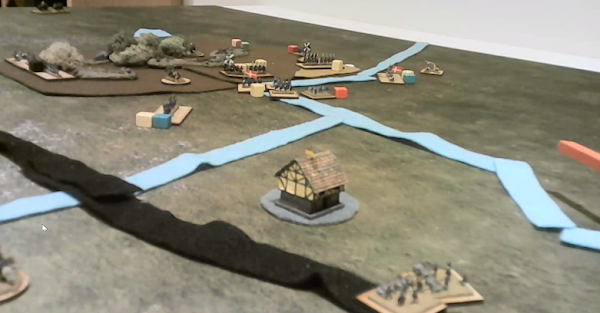 German T8 – Danes ejected from the Claypit! Sadly depleted, disrupted and spent, there's no way we're getting back in there.

The climactic Turn 9 saw us attempting to assault the central objectives, Isted and Upper Stollik, needing to take both for victory. Poor movement rolls saw the effort against Upper Stollik peter out, so our only chance now was to storm Isted for a draw. Unfortunately, I had wasted our cavalry by sending them to wipe out the small German battery by the Claypit, a pointless exercise as we could not realistically expect to recapture that. Far better would have been to attack the grand battery by Isted, which would then have been distracted from defending that objective. As it was, the valiant Danes went in once more, and German defensive fire repulsed them once more.

End of  T9 – the Danes’ last hurrah repulsed. Our collection of blue, yellow, black and red cubes tells the sad story of defeat.


This was a terrific see-saw game. We played it over two evenings. The first session finished at the end of Turn 5. At that point, Crispin was ready to throw in the towel, thinking it was all over for his Germans. Far from it! In the second session, the German edge in firepower and troop quality gradually evened things up. In classic BBB fashion, all three results were possible on the last turn. Congratulations to Crispin on a hard-earned victory!

For anyone wanting to fight this battle themselves, the scenario is freely available from the BBB group files. (It's an earlier draft but I think essentially the same as the one we fought this month.)