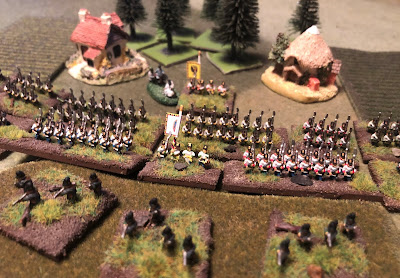 Somewhere in Bohemia: FML Baron Ramming urges his men forward, jaegers to the fore, whitecoats following in close order having learned the lessons of 1859. Too bad this is 1866.
Baccus 6mm figures painted by Richard Morrill.


Given that the Austro-Prussian War of 1866 is such a major 19th-century conflict, I have not given it as much BBB attention as it deserves. Sure, the epic battle of Koeniggraetz has had the proper treatment: the scenario for it in 'Bloody Big EUROPEAN Battles' does it full justice and has been played many times by many happy players. Custozza is in BBEB as well, and a fine battle it is to wargame. But the border battles in Bohemia merit more attention. The truth is that we were constrained by page limits, and there wasn't room for separate scenarios for them all in BBEB. In any case, at the time of publication I was operating a rough 30,000-men threshold - I was focusing on genuinely big battles, the raison d'etre for BBB, and deliberately avoiding smaller ones. Hence the one composite scenario in BBEB covering four (actually even five) of the APW border battles in one large, practically operational-level game.

While the operational-level scenario has its virtues - I found it genuinely illuminating, and came out of it with more sympathy for the oft-criticized Prince August - there is actually good gaming value to be had from these actions individually. Our plan to hold a fourth BBB Bash Day (sadly postponed because of COVID) prompted me to look at these more closely, with the idea of running two of them as a linked pair in a mini-campaign, to be played as morning and afternoon games at the convention.

The two in question are Nachod and Skalitz. In the first, a Prussian corps under Steinmetz debouching through the mountains is attacked by an Austrian corps under Ramming trying to jam the cork back in the bottle. In the second, having battered Ramming, Steinmetz runs into Archduke Leopold's corps trying to cover the Austrians' withdrawal, and a delaying action ensues.

No doubt like many of the readers of this blog, being quarantined at home forced me to seek web-based ways of wargaming. I decided to playtest Nachod as a play-by-email game (PBEM). Others have taken more sophisticated approaches using Skype, Vassal, TTS etc; I went for the simple one of inviting commanders for the two sides to send orders each turn for me to implement on the tabletop. I would then send back a photo-report in a simple standard format: two photos (one from each side of the hill), with the unit designations marked on the photos, and a brief summary of the turn's action alongside.

A bonus was that it gave us the chance to engage with new gaming friends. As well as our Oxford Wargaming Society in north Oxford, there is another gaming group in the county in the form of the South Oxfordshire Generals. We've had some contact in the past, but we're just a bit too far apart to meet up on a club night. But at the SOGs' suggestion, for this game we pitted a Prussian OWS team against SOGs playing the Austrians, with me as referee, lead-pusher and dice-roller.

The game quickly settled into a nice rhythm. The team whose turn it was would confer during the day, and their spokesgeneral would send me their orders by mid-evening. That would give me time to push troops around on table, take a couple of snaps, annotate them and send out the resulting report. The game lasted 10 turns (i.e., 10 Austrian and 10 Prussian), so it took three weeks to fight to conclusion.

Nachod was a serendipitous choice of scenario as it gave us a terrific game. It is a good situation for a game because both sides have to maneuver. There is a built-in see-saw element in that for the first half of the game the Austrians have the preponderant numbers, but as the Prussian reinforcements arrive, the balance shifts. And the very different armies make tactical choices interesting: the Austrians are disjointed and constrained by their assault-oriented Stosstaktik; the Prussians are armed with the deadly needlegun.

Our game was recorded in full by one of the Prussian participants. Those interested in following a turn-by-turn account can find it on his Colin The Wargamer blog. I will therefore just summarise here.

The Austrian plan was a judicious one. Eschewing frontal assault, they worked patiently around the Prussian left flank. The Prussians complied with this somewhat, declining to contest the forward objective of Wenzelsberg at all, and with it the opportunity to engage in a close-range firefight to their advantage early on, preferring to trade space for time.

The Austrians struck a fortunate blow on Turn 2. The small Prussian artillery unit had been slow to deploy, and with the Austrians' first shot they blew it away. Loss of a minor unit would not usually hurt so much, but with so few troops on the table and so early in the game, this loss was magnified over the course of the rest of the game. Had those few guns survived a few more turns, slowing down an Austrian unit here or there, converting a fire combat result from mere disruption into significant casualties, that could have made a big difference.

A similar fate saw off the small Prussian jaeger unit defending the western part of the village of Wysokow. Given kinder dice, when the Austrians assaulted, despite their overwhelming numbers they could easily have been pinned down by Prussian fire, or just pushed the jaegers back through the village. But no, they wiped the jaegers out and seized the whole of Wysokow.

The arrival of Prussian reinforcements slowed the Austrian advance but did not stop hit. Again, unkind dice at crucial times thwarted the Prussians, as potentially devastating Prussian assaults were fortuitously halted, or march columns were uncharacteristically laggard in coming into action.

By the last couple of turns, 5 of the 6 objectives were in Austrian hands. The Prussians needed to retake 3 of these for a draw and 4 for a win. As one photo-report put it, the loss of the Brankaberg left them with a mountain to climb.

Even so, on the very last turn, they had roughly 50/50 chance of all their infantry going in for a last desperate mass assault; if that went in, given how exhausted and depleted the Austrians were by now from Prussian fire, retaking 3 or 4 objectives was by no means inconceivable.

Six Austrian bases became casualties on the last turn, and two depleted Austrian regiments were wiped out in the last assault. East Wysokow fell to the Prussians, and they got a foothold on the Brankaberg. However, the Brankaberg remained contested, and they were unable to exploit beyond East Wysokow to retake either of the other objectives they needed. Thus the Austrians held just enough objectives at game end to claim victory - but a pyrrhic one: 26 Austrian bases lost, against 9 Prussian. (This is just about the historical loss ratio in terms of casualties; total losses in the real battle were over 5:1 against the Austrians, but the difference then was the 3,000+ Austrians taken prisoner as they fell back defeated.)


This was a splendid game, tense and absorbing, with shifts of fortune throughout. As the SOGs' nice appreciative note said, 'Thank you for a superb game. Not only was it well run and with good sportsmanship but it produced a gripping nail biting finish. [The SOGs] have enjoyed the game immensely.' Well worth a refight, then. The scenario is available in the BBB group files.

As I've got involved in a couple of other people's PBEM games as a player now, I'm going to take a break from reffing for a bit. However, the chaps have all confirmed their interest in fighting the sequel, Skalitz, with the same teams, as a mini-campaign per the original intention. Watch this space in a few weeks!