(Yes, I know it should be pronounced more like "ra-mee-yee", but I was playing on the British side so I can be wilfully Anglo-Saxon if I want.)

Following on from the success of his Blenheim game back in February, Matt brought us the second of his "Marlborough's Big Four" scenarios: Ramillies (1706), as already previewed on his own "Pushing Tin" blog.

Ramillies was a battle the French should never have fought. They were ensconced behind their system of fortresses in the Low Countries, where the Grand Alliance could hardly touch them, giving them secure possession of Belgium. However, Louis XIV wanted a victory to restore French prestige, so prodded his Marshal Villeroi into an imprudent advance. The two armies met at Ramillies. As at Blenheim, the French adopted a defensive position anchored on three villages behind a marshy stream. However, in this case the French right faced open ground, so most of the French horse massed there. The forces were virtually equal except for a significant Allied superiority in artillery. After initial skirmishes on the flanks, allied probing attacks in the centre and north drew French forces away to their left wing. Marlborough then shifted his weight to launch the decisive attack across the open ground against the French right. The allies broke through, rolled up the French right and routed the enemy army.

Linear warfare! French line at top facing Allied line (red unit markers, with a few orange Dutch ones on the left). Ramillies is the village at centre left, then Offus to the right of it, and Autre-Eglise furthest right. Some French dragoons in Franquenee (bottom left) detained an Allied infantry unit a while. The marshy valley of the Little Geete, dividing the opposing lines, was a challenging obstacle but not an insurmountable one.

So much for the history; on to our game. For the first time I found myself on the same side of the table as our recent recruits, Luke and Ben. While John, Dave W and Bruce were setting up the French army in defence, another new face appeared and introduced himself! Dave nobly gave way so that Dragos could join the game.

Our task was made simpler in that, due to a misunderstanding, the French did not actually occupy Ramillies itself but lined up just beyond it. Consequently, on our first turn, Ben's infantry were able to march in unopposed to seize the village, which they then held against three French counterattacks. Unlike Marlborough, we launched our horse against the French right immediately, while holding back from attacking their left or centre and letting our superior artillery play on their ranks a while.

Although our horse suffered badly, this attack led the French to shift reserves from left to right, rather than right to left as historically. Seeing their left weakened, we then advanced and got a foothold in the northernmost fortified village, Autre-Eglise. Bruce's first line of defenders there counter-attacked but his second line failed to support them. As our troops in Autre-Eglise were superior in both numbers and quality, he was ejected disastrously. Autre-Eglise was emphatically ours, as was Ramillies - sufficient for victory if we could hold them. Although there were still two or three turns to go, by then our horse had finally got the advantage (thanks to some infantry support), while the remaining unengaged French units had been battered by our guns, so our gallant Gallic foes conceded the game.

A few pics below, followed by some reflections on the game. 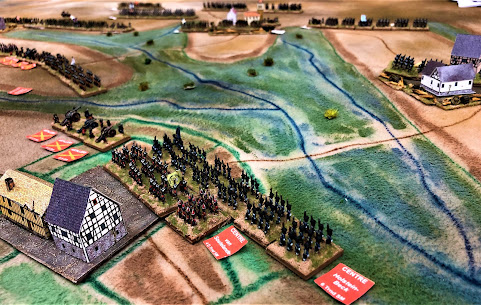 On the allied right, my infantry guard Foulz. Once the French reserves have departed for the opposite wing and my batteries have pummeled the garrison opposite and set the village on fire, my men will storm across the valley to take Autre-Eglise. 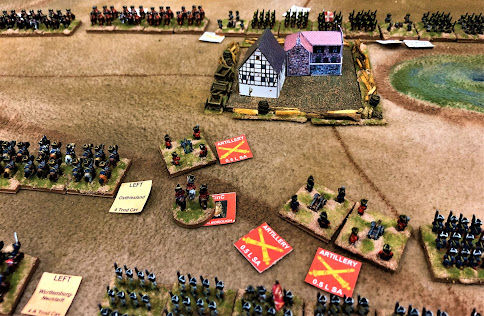 The crucial village of Ramillies on our left-centre. The French had fortified this but neglected to occupy it. Ben's infantry leapt straight in - masking some of his guns, but no matter. To the left, some of our Dutch horse can be seen facing their French counterparts. A swirling and sanguinary cavalry battle ensued there for most of the game. Marlborough himself directs operations from next to the guns. 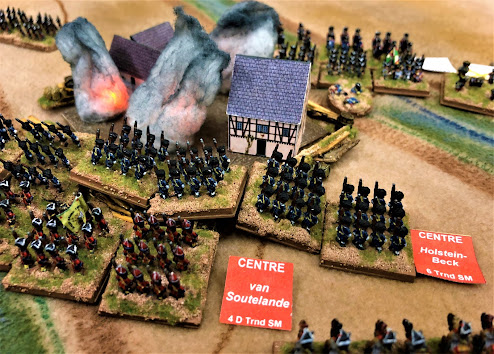 Slightly posed photo of the endgame on our right. My infantry have taken Autre-Eglise, which is ablaze. My cavalry finally floundered through the marshes to back them up. Spent French infantry in the valley beyond have no prospect of retaking this strongly-held village.

Hurrah - yet another new member! Dragos was very happy to have discovered our club, enjoyed himself, and seems set to become another regular. Meanwhile, apparently our near neighbours at the Abingdon club have heard good things about our games and have asked for a demo. Hopefully we can lay something on in October. The groundswell of the BBB bandwagon is snowballing.

Linear warfare: Matt's Marlburian mods capture this nicely, making manoeuvre much more difficult than in standard BBB. When the French found their reserves were in the wrong place, it was suitably hard for them to shift forces to where they were needed and coordinate counterattacks.

Aesthetics and practicality, form and function: Matt's beautifully painted battlemat made the terrain easy to set up and was a pleasure to play on. It was enhanced by nice touches such as his counters for Disruption (a mounted officer trying to rally the troops), Spent (a pile of casualties), Low Ammo (powder barrels or ammo wagons, and of course his illuminated fire and smoke for burning villages.

Guns not firing are guns wasted. Deploying your artillery in the right place is crucial (especially when it is basically immobile C18 artillery). I know all this. Yet I still managed to park one light battery where it was out of range and did not fire a shot all game. I blame the cowardly French for not attacking it.

Matt's Ramillies scenario is in the BBB group files here.