As if one enthusiastic recruit were not enough, Phil's recent arrival at Oxford Wargames Society has now been followed by Luke and Ben, who joined us for the first time this week. For their swearing-in ceremony, Mark laid on another little-known battle from the Austro-Prussian War of 1866: Kissingen.

At the start of the war, Austria had several allies in west and south Germany, notably Hanover, Bavaria and a composite VIII. Federal Corps of various contingents. These attempted to link up but were forestalled by Prussia's swift destruction of the Hanoverian army at Langensalza (one of my favourite 'training scenarios' for BBB). The Bavarians lost some initial skirmishes and fell back to hold the line of the River Saale. In the battle of Kissingen, the Prussians forced the line of the Saale around Kissingen, then held off a Bavarian counterattack on the heights around Winkels, preventing the Bavarians from joining up with VIII. Corps.

Some of Mark's Baccus 6mm Bavarians on the parade ground before deployment. He also has some in the soft cap that they wore in 1866 as well as the Raupenhelm. I told him he needs to get flocking - as we all know, beautifying bases makes a difference! - but of course, time spent flocking is time he can't spend writing more excellent scenarios for us.
Our game was a jolly romp and a good introduction for our new players, who took the Prussian side along with David B against me and Phil as the Bavarians. I had a bit-part, commanding the screen along the river. My battalion facing Luke and Ben in Kissingen itself was swiftly crushed by needlegun-armed Prussians stampeding across the bridge. My boys further north in Friedrichshall did rather better, holding up von Manteuffel (David) for several hours, much to his frustration ... until I got cocky and advanced my right flank battalion out of its nice defensive position in an objective village (Hausen) behind a river, only to find itself embarrassed, isolated and annihilated.

The serious action was in the centre and left. Flushed with success, Luke's Prussians pushed forward and found themselves in the killing zone of Phil's guns and longer-ranged rifles. His first regiment learned a hard lesson. But more followed, pressing on into Winkels itself while Ben's troops took two objectives on the heights in the south (our left flank).

As Bavarian reinforcements began arriving in force, the Prussians had a glorious chance to seize the remaining height north of Winkels. Our regiment there had been battered by Prussian fire and its guns driven off. Two Prussian regiments stormed up the hill - and the defenders rolled 12, the 3% chance they needed to halt the assault which would otherwise surely have crushed them.

This was the turning point of the game, after which swelling Bavarian numbers became inexorable. Such are the fortunes of war!

Only one photo of the actual game, sorry - I was too busy yakking: 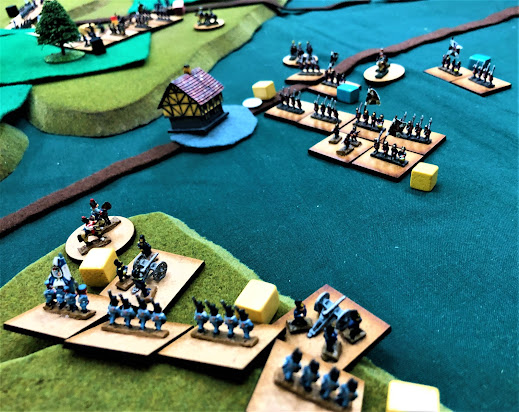 Those are not islands in the sea - the lighting just makes Mark's cloth look blue instead of green! The little village is Winkels in the centre of the battlefield. The heights either side of it are where the main Bavarian stand took place. Prussians approach from right of pic. Led by the Lippe-Detmold battalion, they have surged onto the further height and are about to expel its Bavarian defenders. The nearer Bavarian regiment has had its artillery silenced (yellow cubes) and is about to be half blown away by massed Prussian guns. The disrupted Prussians in the centre are about to rally to storm this height, only to be thwarted by a last desperate volley from the few remaining Bavarians there.

Another fun scenario from Mark's expert pen: a game of two halves in which both sides get to move and attack, the Prussians first surging forward, then having to repel Bavarian counterattacks.

Pay attention to the briefing! I might have done better had I brought my potentially counter-attacking reinforcements on where they were supposed to arrive, rather than two feet more distant from the enemy. It was all there on the scenario handout. Oh well - generals can be careless as well as players.

Exotic units add colour. Two bases of troops on the Prussian side represented the entire Lippe-Detmold contribution to the war, a battalion in nice green uniforms with a fetching red and yellow Lippe flag (glimpsable in the photo above). The pleasure of little aesthetic touches like that is why we game with figures rather just cardboard counters.

There's so much history to enjoy. I knew there was significant action in southern and western Germany in 1866, as covered by Mike Embree's book on those campaigns, 'Too Little, Too Late' (on my to-read list), but playing this game has given me a better sense of what went on.

Great to have new recruits joining with fresh enthusiasm, and to watch their epiphanic joy as they discover just how much fun wargaming can be. All the new men have acquitted themselves very well thus far and are absorbing the ethos of our elite unit.