A rare visit from my mate Anton was the occasion for an even rarer event - me attending OWS on a Sunday (weekends mostly being too few and precious to spend wargaming). For several years, Anton has been gradually compiling a fine set of scenarios for the Second Boer War (1899-1902). He has done a great job of capturing the nature of the very different opposing forces and the distinctive character of the warfare. The resulting games have been excellent. (See for instance these reports of Colenso, Magersfontein, Spion Kop and Modder Spruit/Ladysmith.) This time he had us guinea pigs playtesting the penultimate scenario in his collection: Diamond Hill (1900).

The situation is that the war is approaching its end; Pretoria has been taken; Louis Botha's Boers are being pressed back eastwards towards Portuguese East Africa (now Mozambique) and have established a long defensive position on a line of hills. The imperial forces are aiming to breach this line and press on eastward down the road towards Middelburg.

We were able to play this twice in the day, with some substitutions at half-time (Matt leaving to be replaced by Luke and Ben for the second game). We managed to fit in a pub lunch, a couple of post-battle drinks and then a curry, so it was a good day all round.

But what of the game itself? (I hear you ask.) Ah.

All Anton's previous scenarios had been virtually perfectly calibrated straight out of the box. For Diamond Hill we had all the familiar features: Tactical Ineptitude on the imperial side; Skirmishy but Fragile Boers with the advantages of Smokeless Powder and Camouflage (Anton's Boer War special rules) and Entrenchments, cover worth two column shifts on the combat table. All tried and tested, so we expected a balanced game that would be a reasonable recreation of the historical action. Also, we had the New Zealand contingent on table as part of the imperial force; the All Blacks beat the Springboks the previous day, so I took that as a good omen and was confident of imperial victory.

But no! In Game 1 I was on the British side, knew what to expect, and had some idea of the necessary tactics against concealed dug-in Mausers. Yet despite all our best efforts to take on individual Boer positions methodically, bringing up well-orchestrated gun lines to carefully chosen locations ... we were mown down in heaps for little reward. The last surviving unit of my command (I was Hamilton, on the British right) managed to take one objective hill briefly before being counterattacked and wiped out, leaving my artillery isolated and vulnerable and useless. The other two thirds of our army had put in a weighted attack against the Boer right, likewise took a single hill but could progress no further. We were a long way from the 3 objectives for a draw plus exiting two units off the east edge for victory.

We discussed this over a lunchtime pint. It was suggested that allowing the Boers free deployment while constraining the Brits to historical arrival areas was the problem. Anton rejigged it, we reset, Luke and Ben arrived and volunteered to try their luck as the imperials (alongside Mike, who had been on the Boer left against me in Game 1).

Game 2: different imperial deployment, different attack plan, but much the same result. Mike as Hamilton could not even get onto one hill. Ben (as General French) on the British left advanced cautiously, managed to keep his force largely intact, but did not reach an objective. Luke in the centre did take a central hill but at grievous cost. Interestingly, when we Boers reacted by trying to counterattack, that revealed just how vulnerable the Boers were once they left their trenches. Moving across the front of a British gun line, even at long range, a couple of commandos were blown away and the counterattack never happened. But again, the imperial side fell far short of even a draw.

Clearly something wasn't right, so we chewed it over further. Various tweaks were debated: should we get rid of the imperials' Tactical Ineptitude on the basis that this late in the war they had improved? Should we reduce the Boer 2-shift Entrenchments to 1-shift Rifle Pits? Change the victory target to make it easier for the Brits?

The next day I read about the battle and found that there might be a better answer. We are going back to the sources to check that the troop numbers being represented are correct, as the Boers appear to be too resilient. If Anton rewrites it with fewer Boers than we faced on Sunday, that should make it an even fight next playtest ...

People have been asking for photos of Anton's Boers, so here are a few pics of the action. If those don't excite you, scroll past and you'll find the usual few pearls of sage reflection at the end. 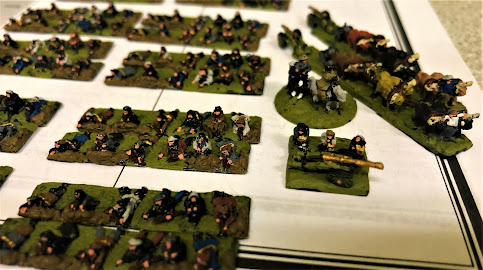 Mounted Boers. Sorry about the fuzzy photo  - camera couldn't decide which rank to focus on.

What the Boers are up against: ox-drawn naval gun and bluejackets.
(Imperial force provided by Mark; Irregular Miniatures again.)

Imperial infantry. The colour party appears to be retreating - premature, or just prudent? 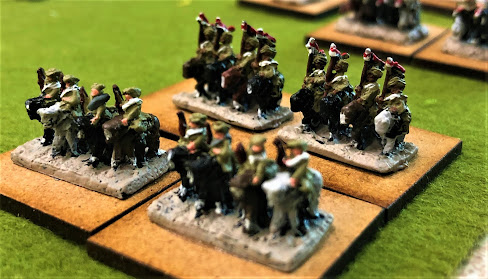 Imperial cavalry. I think Canadians, Australians and New Zealanders were all present at Diamond Hill. 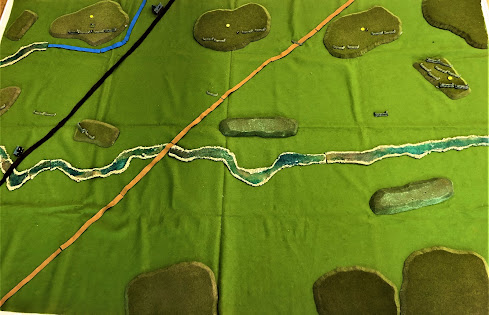 Not so much 'high veldt' as 'green felt': the Diamond Hill battlefield. Brits approach from bottom of pic. Boer entrenchments behind the river protect the hilltop objectives (yellow counters) defending the road to Middelburg. Dark strip is the railway. No Boers visible yet: Boer units start hidden and only deploy when Brits come within 12". Some entrenchments are dummies.

On the British right, Hamilton (later of Gallipoli fame) surveys the empty battlefield. It will soon be empty of Hamilton's troops as well.

French advances on the British left. For the imperials, it's all about the gun line. 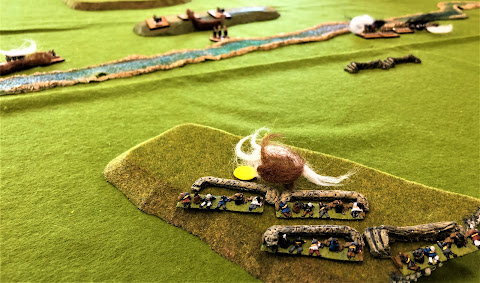 Boer's-eye view of Hamilton's advance. Those Irregular Miniatures entrenchments have done good service down the years. Black fluff on British unit indicates spent from heavy casualties. Brown fluff on Boers = low on ammo. Could they by any chance be related? 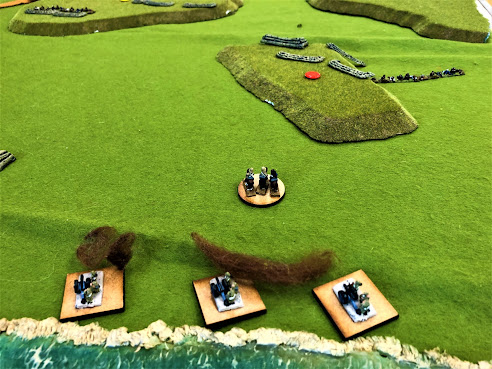 Hamilton's last unit has evaporated, leaving him to face the Boer counterattack alone in front of his imperilled guns. Red counter denotes temporarily British-held objective, about to fall to the Boers again.

High water mark on the British left, where a lone Boer gun is about to be overrun now that its riflemen have melted away.

If there's no room for manoeuvre, there can still be interesting tactical decisions. The Brits faced a continuous line of entrenched Boers, so there weren't any flanks to try to work around. Instead, it became a game of carefully phased and coordinated approach: pick one potential Boer position, move close enough to detect it without getting in range of too many others, move as much firepower up at once as possible, preferably with the guns deployed (but outside rifle range) first. Mastering that art of getting local superiority without dying too quickly was an intriguing challenge.

Likewise for the defender, there were unusual decisions to be made. The Boers are able to fight in their entrenchments as infantry but evade as cavalry. On more than one occasion in the game, the Boer players decided discretion was the better part of valour and had units evade and vacate entrenchments, either to dodge a British charge or simply to avoid being shot at by whatever massed fire the Brits had just moved up. Deciding when to scoot rather than shoot was also an intriguing challenge.

I was a bit disappointed the game turned out so one-sided, particularly for Luke and Ben's sake, as it was quite punishing having to march into the teeth of such deadly fire with so little chance of success. At least they had the consolation of finally dishing out some damage at the end, and they professed themselves happy, so that's OK. If nothing else, they - in fact, all of us - got a healthy reminder of just how much deadlier firepower had become in the half-century between this and the 1866 game they'd fought last week.

The contrast between this Boer War scenario and last week's Kissingen 1866 battle did illustrate the virtue of a system like BBB (other brands are available!) which covers the whole of the nineteenth century and more, enabling us to play a different war every week and have very different games but without having to learn a whole new ruleset. Though you definitely have to adapt your tactics!

And on that note, we will be leaping two centuries back in time to fight Ramillies next - may have to adapt my tactics a little for that too!

And a PS: followed this up with a very different game the following night. My Hungarian friend and co-translator, Dr Péter Bayer, plays a lot of strategy games etc, mostly on PC, but had never tried miniature wargames. I offered to run a remote game for him and Prof Nick Murray in the US. I chose Pákozd, the first scenario in my Hungary 1848 collection, partly because it is smallish and manageable, but mainly because it is full of colourful semi-random (actual historical) events and is a riot to play. So it proved, with the usual medley of Croat Landwehr hiding in the wine cellars, parleys aborting assaults, escaped sheep disrupting proceedings, etc. In classic BBB fashion it all came down to the last few dice on the last turn for an exciting finish. Péter said he loved the layout, the rules and the game. We will do this again. [Update 30 Aug 2022: Péter has done his own very witty write-up here - well worth a read!]

PPS We will be running Pákozd as a display/participation game at the Colours wargames show in Newbury UK on 10 September 2022. Come and see us! 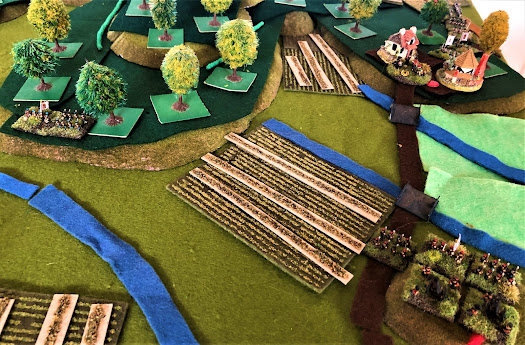 And the Hungarian left wing: newly formed honvéd battalions and guns among the vineyards, barring the way to Budapest.