After last week's loooong games, it was back to a more typical club night this Monday. Without making any particular effort to force the pace - in fact, with a fair amount of relaxed chat and banter along the way - five of us cantered through the whole 10-turn game in just two hours' play.

The battle in question was Trautenau, from the Austro-Prussian War of 1866. This was one of the border battles in Bohemia as the Prussian armies invaded through the passes. Historically, Trautenau was the one the Austrians won, albeit pyrrhically, obliging the Prussian 1st Corps to pull back through the pass it had emerged from but suffering four or five times as many casualties (>5,000 Austrian against some 1,300 Prussian).

We last visited the APW in September when John and I embarrassed ourselves at Gitschin. Before that, we fought another pair of the border battles in 2020, Nachod and Skalitz. Pitting short-ranged but deadly Prussian needleguns against the longer-ranged but slower-firing Lorenz rifle and Austrian Stosstaktik always produces enjoyable tactical challenges. Trautenau was no exception.

Crispin ran the game for us. His terrain deserves special mention. I've already applauded his marked-up mats that create convenient roll-out battlefields. Today let me pay tribute to his hills. Most of the ones he used for Trautenau were just picked out of his existing collection (the 'polystyrene jigsaw' approach, albeit his are wood). However, the centrepiece - the long ridge that culminates in the key heights of the Hopfenberg, Kapellenberg and Galgenberg - he had sawn to shape specially. 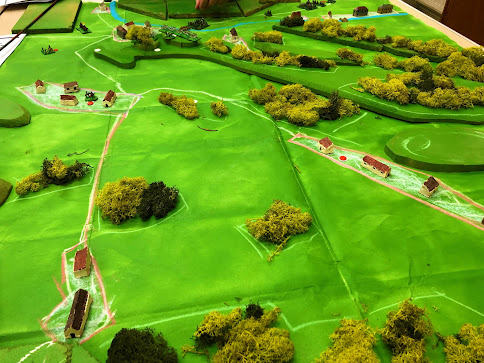 The view from the south. Trautenau is just visible behind the commanding heights, top left. Prussians are approaching from top right except for one small detachment via the road top left. All Austrian reinforcements have to march on via the road bottom left. White counters mark objectives. Trautenau and the three heights around it are four of these. Then there is a second line of three: the villages of Hohenbruck (upper left) and Alt-Rognitz (centre right) and the wood between them. The villages also have a red counter to denote that they are 'forward objectives'. The Prussians must hold one of these at game end to achieve the 6 total they need for victory; they have to have held one at some point in the game to earn a draw.

Initial set-up from the Prussian perspective with Prussians queueing up to march through Trautenau. The river is impassable except at Trautenau or at the Parschnitz ford (foreground). A line of Austrians crowns the heights to greet the Prussians. The Prussians' left flanking manoeuvre will have to contend with a succession of wooded ridges, the nearest - the Parschnitzer Berg - being a steep one. 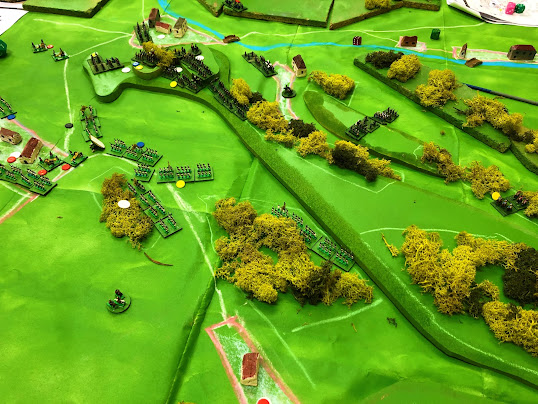 The action was quite fast and furious, so we didn't pause for breath and to take more photos until Turn 7. Von Pape's reinforced advance guard has kicked Mondl's Austrian brigade off the heights with heavy losses, leaving two Austrian batteries top left stranded. Clausewitz is pushing more Prussians up to form a line in the woods. A Prussian cavalry column (centre right) tried to outflank the Austrians but got lost in the woods for most of the game and never did anything useful. 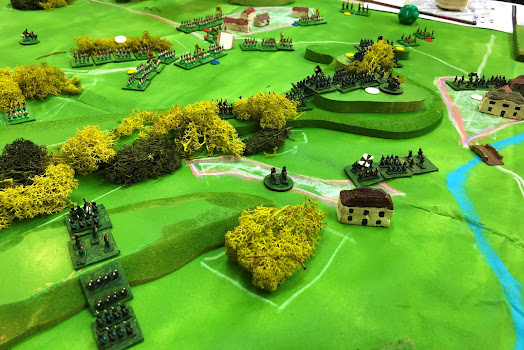 Turn 7 as seen from the Prussian side. The Austrian infantry have formed a solid second line defending the two objective villages and the wood between them, with a couple more batteries at the Hohenbruck junction. The ground between the opposing lines is ominously open. Over the remaining turns the Prussians tried repeatedly to assault, break through and take the wood or Alt-Rognitz, but weight of concentrated Austrian fire repelled them each time. Austrian victory!

Terrain matters (2). We got a sense of the challenge the Prussians faced: bashing through a heavily defended pass on their right, or straggling through extensive difficult terrain on their left.

Firepower! After recent Napoleonic or 1848 games with short-range smoothbore weapons, this 1866 action with rifled weapons and breechloading needleguns gave a refreshingly different flavour. The Prussian needleguns demonstrated their lethality in the close combat around the heights. When it came to crossing the open ground to assault the Austrian second line, massed longer-ranged Lorenz rifles with artillery support came out on top.

Maintain the aim! I had read the scenario properly in advance and kept the objectives and reinforcement schedules in mind at all times. John and I therefore marshalled our troops appropriately and (with a little help from Bohemia's terrain and Prussia's poor movement dice) redeemed ourselves after our lamentable performance at Gitschin.

Mobile battles are fun. The nature of this pretty evenly-matched encounter battle meant both sides had lots of movement, and lots of decisions about where to commit reinforcements.

Commanders are crucial. In the historical battle, the Austrian Gablenz was as decisive and aggressive as the Prussian Bonin was shambolic and hesitant. Bonin had mixed up his formations, which caused confusion; some of his troops were particularly fatigued from long approach marches; and during the battle, some Prussian units retreated after misinterpreting signals. On the tabletop, this meant Bonin wasn't represented, and all Prussian units were rated Passive (a -1 on movement). Without those command penalties in our game, the Prussians would have moved fast enough to get into the forward objectives before the Austrian second line could form.

The scenario is in the BBB group files as usual.