Our Hungary 1848 campaign approaches its end. With less than a month of war left, the last major actions in Transylvania were fought around Sepsi-Szent-György in the far southeast of the country. These provided the setting for our 13th battle - unlucky for some.

Perhaps a little description of that setting is in order (with apologies to anyone about to be offended by my light-hearted caricaturing, which is intended for artistic purposes only).

Strategic background: the war has less than a month to go. Hungary’s strategic objective is for its two main armies under Gorgei and Dembinski to link up in the desperate hope of inflicting a serious defeat on the Austrian main army: Gorgei in the north is therefore trying to dodge past the Russians and unite with Dembinski in the south, who is currently in the fortified camp at Szeged. The role of General Bem (the Hungarian C-in-C in this game) is to stop Russian forces converging on Dembinski from the rear through Transylvania. To achieve that he is striking at their line of communications through Kronstadt, which is guarded by Clamm’s Austrian corps.

The majority of Transylvania’s population were Vlachs (Romanians). These were generally the lowest social class, in fact had mostly been serfs until emancipated by the Hungarian govt during the war. The principality's Hungarian inhabitants lived predominantly in a central stripe running from the NW down to the very SE corner of Transylvania. (This was the stripe that Hitler gave back to Hungary in the Second Vienna Award in 1940.) They were free yeoman farmers or middle-class merchants and professionals, and the noble landowner class was largely Hungarian. The major towns were ‘Saxon’, with large urban populations of ethnic German artisans, merchants and professionals - the bourgeoisie.

Hungarian resistance in Transylvania was led by the Szeklers. The Szeklerland was the area in SE Transylvania. These proud, indomitable people thought of themselves as the descendants of Attila the Hun. The very SE tip, the ‘Háromszék’ (roughly ‘three parishes’) was more like Asterix the Gaul – even at the height of imperial invasion, a few small villages still held out against the Romans Austrians. They collected copper pans and church bells for their folk hero Áron Gábor to melt down and turn into cannon. They were hardcore and provided astonishing numbers of recruits for the Hungarian cause.

To our battle, then. The situation is that General Bem (actually a Polish exile who had fought against the Russians in 1830-1831, and before then under Napoleon) has his forces menacing the strategically vital town of Kronstadt along three different axes, keeping his opponent in doubt as to which direction he will attack from and with how many troops. Historically, the Hungarians pushed forward on the central and easternmost of these axes and drove the Austrians back some way. There was then a lull of a couple of days, during which Bem took a portion of his force east across the Carpathians to try and stir rebellion in Moldavia, but without success. In Bem's absence, the Austrian commander Clamm-Gallas moved his troops up the western axis, then left-hooked across some difficult mountainous terrain to retake villages on the central axis, successfully repelling the Hungarian threat to Kronstadt. However, Bem achieved his goal, as the Russians under Lüders turned back from their march down the Maros valley in order to finally crush the Szeklerland instead.

Our battlefield: the plain of the River Alt, with a wedge of densely forested mountains projecting into it from the north; more mountains in the far SE corner, infested with Hungarian irregulars. Kronstadt is off-table to the south. The three road axes converging on it each have three objectives along them (yellow counters = Austrian-held) that measure Hungarian progress towards the allies' line of communications.

Allied deployment. Clamm-Gallas's Austrian forces are deployed forward on the western and central axes, with a large reserve left of picture. The attached Russian contingent under Rennenkampf guards the eastern approach in the foreground. Sepsi-Szent-György is the village at the table edge, top right.

Frontal view of the Russians. They wear the same spiked helmets they will wear in the Crimea five years later. 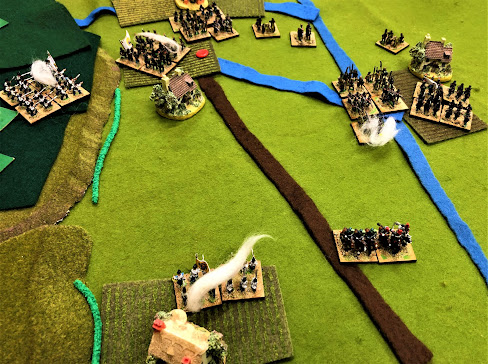 Intense fighting rages around Szemerja, just south of Sepsi-Szent-György on the central axis. The Hungarians have smashed through the Austrian defenders there and planted a red counter in Szemerja, but Austrian reserves will soon arrive.
The scenario tries to reproduce the Austrians' uncertainty over where the Hungarians would attack and in what strength. Initially the Hungarians attack with two thirds of their force along any two of the three axes. After a night interval, they have the option of continuing with only those two thirds (the historical option), or committing the rest on the third axis at the cost of increasing the number of objectives they require for victory. Meanwhile, the Austrian reserves cannot be released until the Hungarians have made a certain amount of progress in terms of objectives taken or casualties inflicted: i.e., demonstrated that they are a serious threat rather than just a feint.

In our game, Mark and Dave attacked down the centre and east to start with. On my right wing, the Russians were singularly unresponsive to my orders (which was quite historically accurate for this battle). My centre had to fall back in the face of Hungarian numbers, losing badly enough to unleash my reserves to counter.

My other problem, apart from lethargic Russians, was the Hungarian irregulars lurking in the hills in the SE corner. These needed to be screened or smashed. Somehow I let them pin my cuirassiers for most of the game - my best unit. Between those two factors, I felt unable to spare a unit to reinforce the infantry and guns on my left wing.

During the Night Interval I did finally shift the Russian light cavalry towards my left, but couldn't move them far and fast enough. The Hungarians exploited my error by committing their third division on that axis. Although my grenadiers kept them out of the first village they hit, their hussars were able to dash around behind and head towards Kronstadt, taking two objectives.

At the end of the game, then, I was trying to retake these plus one they had captured in the centre. For their part, they were still trying to evict my grenadiers and sneak their irregulars forward to seize an objective. Thus on the last turn there were no fewer than five objectives being contested across all three axes. Inevitably and perfectly, the final score was - a draw!

Strategic options add interest. The Hungarians have a big decision at the start as to which two of the three road axes to attack along. Immediately that means there are three significantly different plans possible. On the Austrian side, there is some latitude over where to deploy the reserves initially, which can also shape the game very differently.

'Triggered events' add interest. Odds are against the Austrians at the start. Once they lose badly enough to 'trigger' their reserves, the odds shift against the Hungarians, and it becomes a question of whether there is enough time for the Austrians to exploit their numerical advantage.

Uncertainty adds interest. The huge mid-game decision for the Hungarians is whether or not to commit more troops and shift the odds again, which means they have to take an extra objective - their job gets harder but they have more tools with which to do it. (Of course, players tend to want more toys on the table!) The Austrian player needs to juggle contesting the present threat while taking due precaution against the possible one.

A flank or rear threat adds interest. That single unit of Hungarian irregulars behind my flank - Raw, Passive and Fragile, in other words, rubbish - exerted an influence out of all proportion to their combat value.

A rarity: Aggressive Raw troops! I felt this was the right way to rate that half of the Hungarian units representing the newly-raised formations of poorly-trained, poorly-armed but enthusiastic Szekler recruits. It did give the game a different flavour and seemed to work right on the table.

The right time-space-force equation? This was a really nice swift, mobile, intense game: eight turns long, with 8-10 units a side, on 6'x4' of mostly open terrain punctuated by villages. It felt as though we crammed a lot of significant decisions and exciting fighting into two hours' play. (Contra my recent post in praise of loooong games!)