This V-E Day, 8 May 2022, was a suitable day for a pilgrimage to a hidden gem of a museum in Normandy: 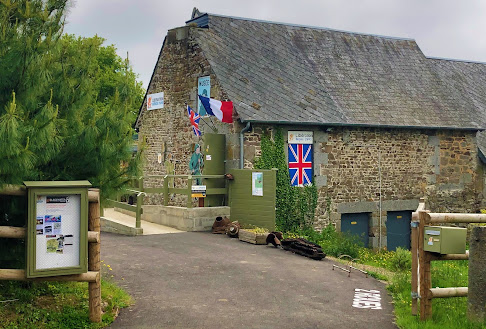 The Musée de la Libération de Berjou is dedicated to the history of the battle around Berjou on 15-17 August 1944. This was the moment when German 7th Army was scrambling to escape the Falaise Pocket, which was about to be sealed. The British Operation Bluecoat had covered the flank of the American breakout (Operation Cobra) and brought British 2nd Army down past Vire. To cover their retreat, the Germans had tried to establish a new defensive line facing west, anchored on Flers and Condé-sur-Noireau. Now 2nd Army launched Operation Blackwater to cross the River Noireau (i.e., "black water") and breach this last German line.

Berjou is on steep wooded high ground 5km east of Condé, covering the flank of the German line. At dawn on 15 August, 214 Brigade of 43rd (Wessex) Division crossed the Noireau at several points. The next morning, the German 276 Infanterie-Division launched a violent counter-attack. The arrival of the Sherwood Rangers Yeomanry's tanks helped to repel this. Then, after a powerful artillery barrage, 1st Battalion the Worcestershire Regiment liberated Berjou. The battle cost the lives of 70 British troops, several hundred Germans, and between 15 and 30 civilians.

The museum commemorates this action in a building absolutely packed with artifacts, all recovered from the battlefield. Because it has so much stuff now, they are planning to extend it. The building itself had a German gun position next to it and still bears the scars of battle damage. Exhibit highlights include an intact 81mm mortar, a rare Gw-43 German automatic rifle, an SS colonel's uniform, and (bizarrely) half a German sea mine (apparently jettisoned by a German plane, it blew out every window in the village), but these are just a few out of hundreds of items of kit, weaponry and miscellanea of all kinds. This is a very substantial collection which is still being added to: just last week, two Lee-Enfields, a Kar-98K and a Sten in good condition were discovered in a case concealed in a building wall. Our group was treated to a personal guided tour by the grandson of the man who owned the building during the war. (The owner was serving in the French military and was taken prisoner by the Germans in 1940, I believe; his uniform, POW documents etc are on display.) Our guide himself was responsible for many of the finds retrieved from locals' attics or metal detecting in the fields around about, and his knowledge and enthusiasm made the visit even better. 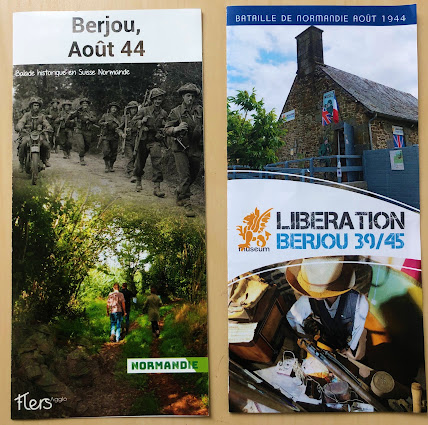 The museum is only open on Sunday afternoons, 14:00-18:00, from May to September. If you should find yourself in Normandy in those months, do make the effort to go to Berjou - it's well worth it and much better than some bigger and better-known museums in Normandy.