The Unluckiest All Black

Surely all wargamers and amateur military historians enjoy reading about the deeds of braver and better men than ourselves. In that vein, let me depart from this blog's usual military scope and pay tribute to an illustrious forebear whose notable exploits were performed on the rugby pitch rather than the battlefield (his military service being on the home front). 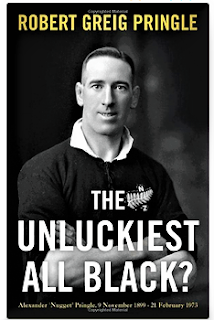 Alexander 'Nugget' Pringle (1899-1973) played rugby for New Zealand, earning one All Black cap in 1923. He would surely have merited more, but fickle fate in the form of injury, illness or other misfortune thwarted him repeatedly - hence the title of his newly published biography, 'The Unluckiest All Black'. This is available in paperback for a modest £9.95 or as an ebook, eg on Kindle for just £4.99. It has been described as 'the latest addition to the New Zealand rugby canon' by noted author and historian, Dr Ron Palenski, who kindly provided invaluable assistance during preparation of the book.* I hope it will be of interest to some readers of this blog.

(Disclaimer: I helped prepare the book too, mainly with the graphics.)

* Incidentally, as well as his sports books, Dr Palenski is an authority in our usual military history domain as well. His military books include 'Kiwi Battlefields' and 'Men of Valour: New Zealand and the Battle for Crete.

Email ThisBlogThis!Share to TwitterShare to FacebookShare to Pinterest
Labels: book