Time is a bit short this week, but it would be remiss of me not to give suitably honourable mention to the fine game Crispin ran for us at OWS on Monday. This was an Austro-Prussian War action, Gitschin.

It's an interesting battle because, not unlike last week's Hegyes outing, one side's mission changes radically halfway through. Once again it is the Austrians who have this awkward problem to deal with. They start the battle determined to hold a defensive line and halt the Prussian advance. Then, when they are already inconveniently heavily engaged, a courier arrives with the order to withdraw.

Crispin addressed this in scenario terms by requiring the Austrians to hold three out of four objectives on the defensive line until either Turn 5 or Turn 6 (determined by a die roll on Turn 6 to prevent unduly gamey actions by the Austrian players). If they fail, they lose instantly. After that, victory is decided by how many Austrian units manage to escape off their home road exits. 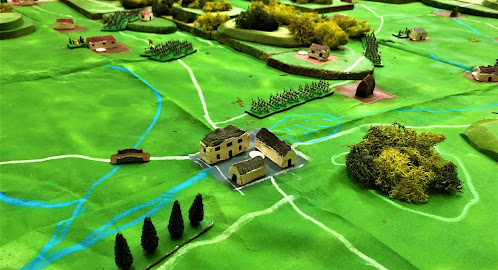 View from the southern corner of the battlefield behind the Austrian lines. Austrian columns can be seen marching forward to occupy the line against the Prussians who will march on at top of picture. More are off-camera in the distance to the right. Saxons will arrive left foreground on Turn 2. In the foreground is the town of Gitschin. The two roads leading off the bottom edge are the Austrians' escape routes. Buildings hand-crafted by Crispin.

John and I took on this difficult job, John holding the Austrian right while I commanded the left, including our Saxon reinforcements. The radical asymmetry in weapons and tactics soon became apparent. Initially our longer-ranged rifles and deployed artillery disrupted and delayed the Prussians' approach. However, as soon as they got close, skirmishers with needleguns demonstrated their superiority to Stosstaktik and devastated our ranks.

Nevertheless, we were still solidly in control of the defensive line by Turn 6, when we were fortunate enough to be allowed to withdraw immediately rather than hold on for an extra turn. Less fortunately, though, we had paid insufficient attention to the inevitable need to retreat eventually, so too many of our troops had ventured too far from home.

To make things worse, Dave W on the Prussian right unleashed a deadly volley of 11s and 12s. The critical one was against the Saxon Kronprinz brigade on our southern flank. This happened as I was trying to move it into Podhrad to enfilade the Prussian 6th Brigade. Had this succeeded, it was have seriously hindered the Prussian attempt to cut us off at Gitschin. Instead, the Saxons were cut down in droves, prevented from reaching the cover of the village, pinned in the open, immediately rendered Spent and therefore easy meat for the Prussian charge that inevitably ensued.

From that point it became a desperate scramble to escape. One of my Austrian brigades was too far forward to get back. The other had a chance but ended up driven into a marsh being gunned down from behind and unable to extricate itself. I did salvage the Saxon cavalry and Leib brigade, though, so we just needed one unit of John's command to escape for a draw or two for a win. His one possible infantry unit failed a movement roll on Turn 7, so on the final Turn 8 it all came down to his remaining cavalry unit. Could they manage a half-move and also avoid being mown down by the Prussian infantry nearby? Of course the dice blew it and they didn't move at all - Prussian victory! 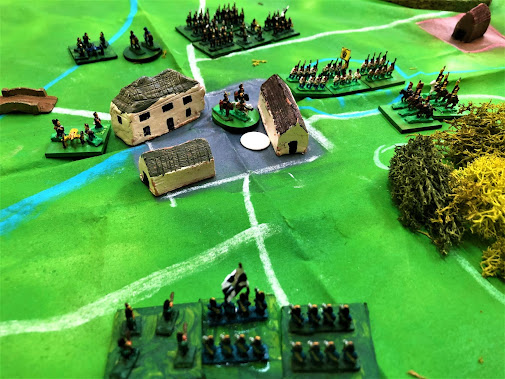 Ignominious defeat! Crown Prince Albert of Saxony (that's me) about to be captured in Gitschin along with his artillery and Poschacher's battered Austrian brigade stuck in a marsh. Right of picture is the Austrian cavalry column, deciding - perhaps wisely - not to risk riding across the front of those nasty Prussian needleguns in the foreground.

The scenario was ideal for a Monday night - not too many units, not too many turns, plenty of movement. It took under two hours to play.

Once again, having the mission and situation change mid-game made for a really entertaining challenge.

Likewise, asymmetrical armies generated interest as they force players to choose the right tactics to exploit their strengths and the enemy's weaknesses.

First principle of war is maintain the aim. John and I lost because we failed to do that: we focused too much on fighting the enemy in front of us and too little on making sure we had enough units close enough to the escape routes behind us.

Usually the dice even out, and I wouldn't say they were especially unkind to us this time either. However, sometimes one or two critical rolls really matter. The volley that stymied my Saxons' flanking manoeuvre was crucial.

I want some Austrian grenadiers!

The scenario is freely available in the BBB group files here. There may be more Austro-Prussian BBB action at OWS soon as I wrote scenarios last year for Trautenau and Soor which have yet to be played. These are in the files too.