This year's ongoing project is to playtest all the scenarios for my planned Hungary 1848 BBB campaign book (10 out of 15 now done). These battles have kept me and the gang very much engaged. Even so, a change of diet now and then is healthy. Happily, over the last couple of weeks I've played three quite different games.

Two new members, Simon and Martin, joined OWS and laid on Gaslands for us. This is a kind of car wars game in a Mad Max type post-apocalyptic setting. The scenario was a race, but one in which we could shoot or ram our fellow competitors. We each had a team of two cars. I chose two that closely resembled cars I used to own (apart from the rockets). Our referees had a lovely layout which we duly charged around, cheerfully machine-gunning and ramming each other. With four newbie players, we didn't quite complete the circuit, but Bruce's sturdy van was comfortably in the lead when we wrapped up and my poor little sports car was scrap metal ... 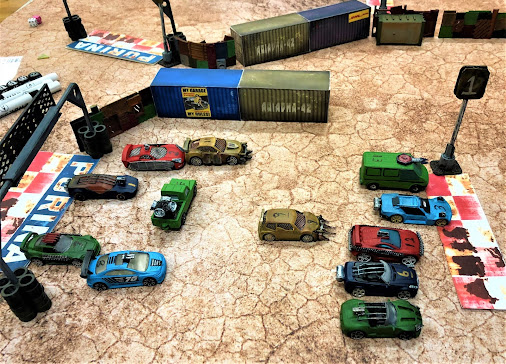 Excellent lighthearted fun, a nice change from historical gaming, and great to meet two new members who will enliven OWS. Incidentally, Simon is the proprietor of Syborg 3D Printing, producing a terrific range of 15mm vehicles, aircraft and terrain for WWI, WWII, post-war and more.

Back to BBB but not to Hungary. Mark has been working his way through all of Napoleon's biggest battles. This time it was the turn of Lützen, a battle about which I knew effectively nothing until now. This was Napoleon's first victory of the spring campaign of 1813, an attempt to knock the Prussians out of the war and dissuade the Austrians from joining in. It makes a good game because initially the Russian and Prussian are on the attack, trying to beat up Ney's isolated corps; then as French reinforcements arrive, the allies have to fend off Napoleon's double envelopment. Thus everyone gets to do lots of maneuvering and make important decisions. Mark's scenario was particularly good because he drew the frame wider than most maps of the battlefield tend to do, so he made all that outflanking space available for people to make mistakes in.

View from the French side. The Imperial Guard (and friends) have counterattacked up the road from Luetzen (offtable bottom right) and retaken three of the four central villages, as well as both flanks, but failed to cut the allied line of communications (road exit at top) - a draw.
We fought this in two sessions: the first remotely, the second in person in Mark's Kriegspielium. That made a big difference. In the remote session, seeing just a segment of the battlefield at a time made it hard to appreciate how the sectors connected and interacted - so for instance I didn't realise some of my artillery in the centre was vulnerable to enemy cavalry on my right until they pounced. Having the overall view of the whole battlefield made it much easier to understand what was going on. Not a complaint - the limited 'fog of war' view is probably more realistic than the 'helicopter' view! - and either approach can work, it was just unusual to have the chance to get both views in the same game. 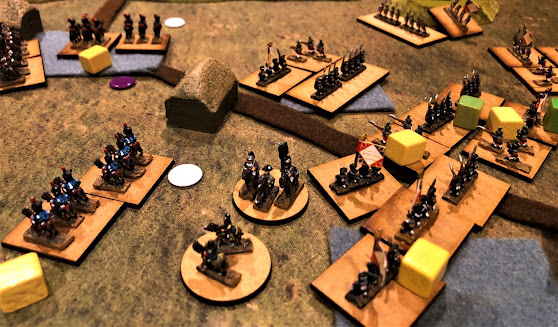 Close-up of Napoleon himself among his grognards in recaptured Kaja, Rahna and Gross Goerschen.
As for the course of the game itself: broadly historical, I think. A big slugfest in the centre over the four strongpoint villages; then pressure on both allied flanks from French reinforcements; and finally the Imperial Guard smashing into the middle. Honours even, objective-wise, meant everyone went home happy with a draw. A terrific scenario that doesn't need any further revision.

I was entrusted with a 10-year-old boy to entertain for a Saturday. Fortunately he has been indoctrinated, is already army-barmy, and was eager to roll some dice. I was recently given two boxes full of 15mm Hundred Years War figures, painted and based, but somewhat the worse for wear after decades in a barn. My apprentice and I spent a happy hour or two just sorting them out and getting rid of the goose poo, cobwebs and dead beetles. Next step was a 3-minute video, "Battle Stack: The Battle of Agincourt tactics", pitched at just the right length and level for an excited youth who just wanted to get the toys on the table. Once he knew what the historical battle was, he had a jolly time setting up a sort of Agincourt terrain. I say "sort of" because my French had it even harder, having to cross a river into the teeth of entrenched bombards and organ guns.

A rare sight in my war room - something pre-Napoleonic! Linear, yes; limited, yes; dull, no.
I didn't have a suitable rulebook to hand so we played DBM - that is, De Bellis Made-it-up-as-we-went-along ... let's say inspired by DBA/DBM (command pips and opposed die rolls) but simplified for speed and with movement 'kriegspieled' rather than measuring. This exceeded my expectations: after 90 minutes or so I kept trying to surrender, but His Majesty the King of England was having such a good time he would urge me to charge again and again. I did overrun the bombards and the cocktail-stick chevaux de frise, and I did get rid of a lot of English longbowmen and men-at-arms, but eventually ground to a halt and was permitted to concede defeat.

This was surprisingly good fun for all concerned. It was also educational for my young pupil: he now understands the importance of maneuvering your medieval troops in "battles" rather than modern skirmish lines; and how lethal the longbow was; and has had a first taste of command pips as one way of representing a commander's limited time and attention and influence.

Back to the staple diet of BBB Hungary 1848 tomorrow, but refreshed and invigorated by having enjoyed some different games in between!