It's been two months since my last post about our Hungary 1848 campaign, our refight of Pered. That's due in part to summer holidays, but also to the fact that playtesting battle #9, the Second Battle of Komárom, did not go entirely smoothly.

We had an initial rather disappointing playtest. I'd tried too hard to make funky special rules for reinforcements recreate the unusual course of the historical action. As the players themselves pointed out, these induced 'gamey' player behaviour (which backfired). Furthermore, it wasn't a particularly exciting game, as the action was mainly limited to a to-and-fro slog in one sector of the table.

I rewrote it, replacing the problematic reinforcement rules with something more conventional. I did a solo rerun. This went better.

But then for a sanity check I looked in detail at the history again. Oh woe! For games #1-#8, I'd done this before the playtest and revised the scenario to reflect my recent research. I'd evidently failed to do so for this one. The draft scenario wasn't wrong, exactly, but by starting the action before the preliminary skirmishes it really made it impossible for the game ever to follow the shape of the actual battle. This is because the battle proper started after the Austrian commander, Haynau, thought it was over and was sending his troops back to camp, which a tabletop player is never going to do.

The situation is this. After Pered, the Hungarian army has retreated into its great fortress and entrenched camp at Komárom. Haynau has marched on Komárom along the south bank of the Danube, easily driving back a few Hungarian outposts. His aim now is to tighten his cordon around Komárom and cut its communications with Budapest on the south bank. If he can provoke a major battle outside the fortress, even better, but he does not feel ready to assault the fortifications and explicitly forbids his subordinates to do so. 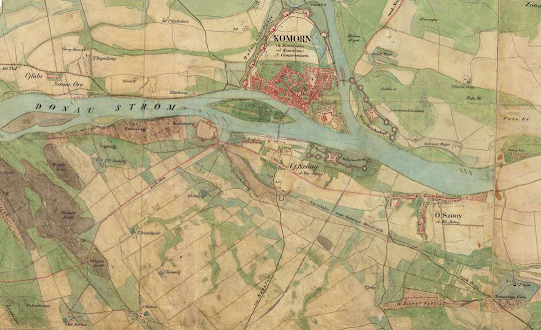 C19 map of the fortress and the area around it. (Circa 1860s - the fortification on the Sandberg was built after the war, and the railway is new too.) From the Austrian Second Military Survey map collection here.)

Thus the allies advance, flags flying and drums beating, and make an imposing show of force around the Hungarian lines. Some hussars sally forth with their horse artillery but are soon driven back to the shelter of their fortified camp. Benedek's brigade seizes the village of Ó-Szőny on the eastern flank, cutting the riverside route to Budapest. Haynau is satisfied he has achieved his aim and orders his major formations to withdraw to camp: Schlik's I Kps to hold the Ács wood, Panutine's Russian division to retire south to Nagy-Igmánd, and Wohlgemuth's IV Kps to march off to Mocsa in the southeast.

Unfortunately in an excess of zeal one of Schlik's brigades (Reischach) had exceeded its orders, chased off a Hungarian sallying force, and pursued it actually into the redoubts. This produced a counterattack directed by Görgei in person (who also turned his own guns and sabres on routing Hungarian troops to forcibly rally them). The Hungarian counterattack against a force that had now been ordered to withdraw anyway threw I Kps into disarray. Görgei seized the opportunity and launched a large-scale attack on I Kps, aiming to inflict significant damage before the rest of the allied army could intervene. 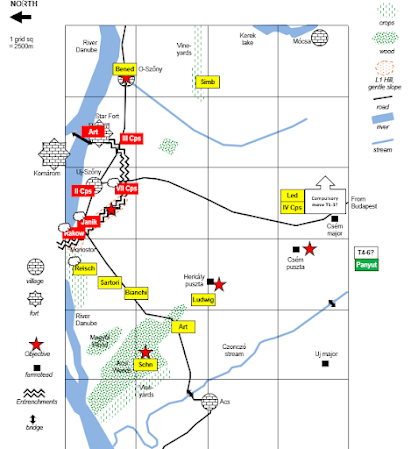 This is the moment at which the revised BBB scenario for our last playtest started. Both sides have some troops disordered by the preceding skirmishes. The Austrians only have I Kps and Benedek at their disposal initially. IV Korps is some distance from the action and obliged to move towards Mocsa for three turns unless it rolls a 6. The Russians are off-table and will enter on T4, T5 or T6, depending on the dice. 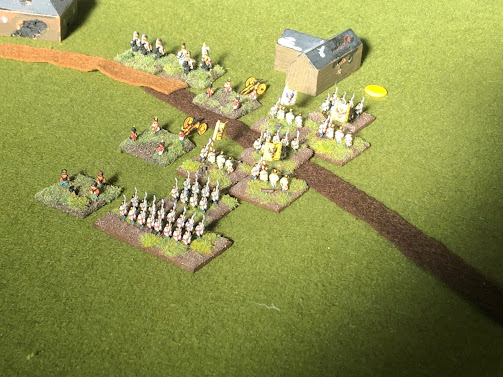 IV Korps marching serenely away from the action. Lovely day for it.

This playtest went much better. A well-marshalled Hungarian assault on the eastern flank saw Benedek expelled from Ó-Szőny and wiped out in short order. 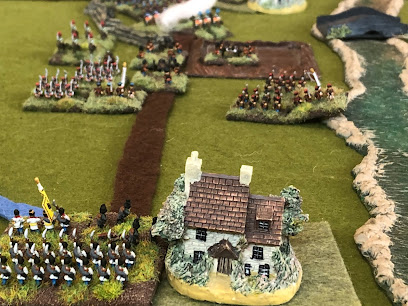 Not so smooth on the main front in the west: Hungarian columns and limbered guns debouched from the redoubts, but the units intended to screen them failed to coordinate their advance. This presented Schlik with an opportunity he duly took, launching his brigades into a renewed attack. This promised great things but failed to deliver, as the dice were kind to the Hungarian defenders' fire and less so to the Austrians' closing assault. 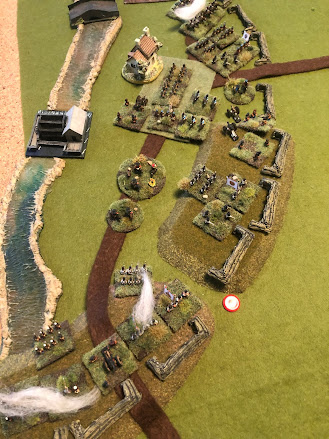 Hungarian 2 and 7 Corps massed in the fortified camp. Those in the foreground are about to shake off the white smoke of their Disruption, but will fail to advance as planned on Turn 1. 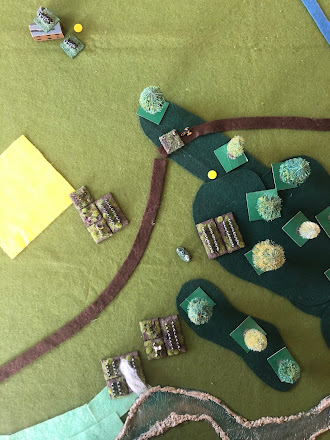 Schlik's corps in front of the Ács wood, about to go over from defence to attack.

This initial Austrian reverse gave the Hungarians an advantage on the western front that they were able to exploit inexorably over the remaining turns, to the point that three of Schlik's four brigades were wiped out by the end and the wood objective lost.

The allied dice were not much kinder in the crucial matter of reinforcements. Wohlgemuth missed his three chances of rolling a 6 so he reached Mocsa before he could turn around. From there he was able to head north and retake Ó-Szőny on the last turn, but no more than that.

The Russians failed to arrive on T4 but at least they managed to get both brigades on-table on T5. This resulted in a swirling melee around the two objectives that historically formed the allied line extending from the Ács wood: the manor farms of Herkály Puszta and Csém Puszta. The decisive factor here was the allies' decision to split the Russian division and send part of it straight up the main road in the hope of getting a foothold in the redoubts, a gamble that could have gained them the extra objective they needed for victory. However, it cost them the central objectives that would have saved a draw.

The end result, therefore: a deserved Hungarian win, but an entertaining game with action all over the pitch, very different from the previous version. I pronounce this scenario fit for public consumption. A few reflections below. 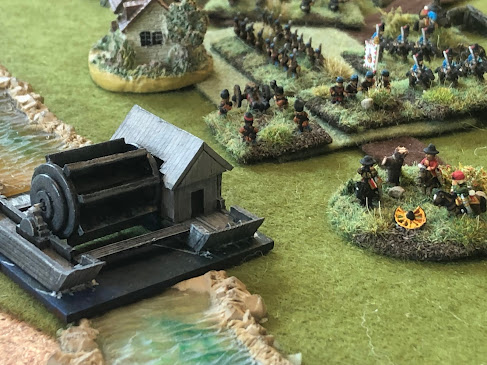 My tabletop was graced by a ship-mill for the first time. I described these forgotten contraptions previously here. As the contemporary map above shows, there were no fewer than 20 of these things next to the Monostor (though probably not at the time of this battle, as they tended to get rounded up to make improvised pontoon bridges, or else burned to prevent said improvisation). The endlessly creative Colin the Wargamer kindly scratchbuilt and donated this one to me. See his own blog for how he did it. The wheel actually goes round!

The virtues of continuity: after multiple '48 battles, all the players are thoroughly conversant with the troops' capabilities. Elite units like the Polish Legion, or the 'red kepis' (9th honvéd battalion) or the Austrian cuirassiers are like old friends. But on the other hand ...

Variety is the spice of life: I don't think anybody's bored of the campaign, but after repeated playtests of both the First and Second Battles of Komárom on the same battlefield with similar forces and similar situations, I'm sure we'd all welcome a change of scenery to offer fresh tactical challenges. Unfortunately the next battle in the chronology is ... the Third Battle of Komárom. (And there is a Fourth Battle of Komárom as well, but that is almost at the end of the war.) Oh well. There are a couple of different objectives, so it should still be different enough to be interesting. Anyway, before then it will be back to the club for some face-to-face Napoleonic gaming, which will be refreshing.

Variable reinforcement arrivals add interest. Just that small uncertainty of whether the Russians would appear on Turn 4, 5 or 6, and the chance that IV AK might turn round before Turn 4, made the Hungarian players wary and introduced extra tension and excitement.

Remote gaming creates fog of war. I've mentioned it before, but this time it was a different player who remarked how he liked not having the usual clear overview and degree of control you get when everyone's around the table.

Last but not least: terrain matters. Love the ship-mill!

A detailed historical description of the Second Battle of Komárom will feature in "Hungary 1849: The Summer Campaign", in preparation for Helion for publication in 2022 as the sequel to "Hungary 1848: The Winter Campaign".