The '48 campaign furnished us with another epic game, fought remotely over two successive Monday evenings. We were joined by a new comrade, Mike E, a retired US army officer who cut his teeth on SPI hex boardgames but had never really tried miniatures gaming.

Histoically, after the inconclusive Second Battle of Komárom (our previous game) there was a lull of a week or so. The Hungarian C-in-C, Görgei, was suffering from a head wound. He was briefly dismissed while unconscious by an unhappy Regent-President Kossuth but reinstated after protests from his outraged army. He decided on a last desperate attempt to break out southwards from Komárom but, still not fit to take the field, he had to let Klapka command. The result was a poor plan, poorly executed, and the Hungarian army's sortie was repulsed.

The scenario portrays the command confusion on the Hungarian side by omitting Klapka, representing only the two best Hungarian corps commanders (Leiningen and Pöltenberg), and making Nagysándor's under-performing 1st Corps and Pikéty's cavalry division Passive. There are objectives spread around the table, variously representing the main Austrian defensive line, the Austrian line of communications beyond, the route east to Budapest, and the Hungarians' own fortifications. As Görgei recognised at the time, the balance of forces makes a genuine breakout virtually impossible, so victory is measured by what 'high water mark' the Hungarians achieve in terms of objectives taken temporarily as well as those held at the end.

I can only describe the first session as 'vivid'. Running these games is always quite demanding both physically and mentally but I was almost light-headed by the end of this one. The action was fast-moving, unpredictable and exciting. 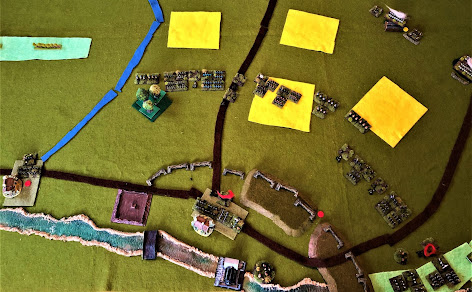 The Hungarian initial deployment: 1st, 3rd, 7th and 8th Corps in a semi-circle outside their fortifications, about to emerge from the fog and surprise the Austrians (mostly off-camera, spread out in an even wider semi-circle, with their allied Russian division off-table for the first half of the game). River Danube in the foreground. Light green areas are vineyards. Yellow fields are there to remind players that the tall maize limits firing ranges to 6" everywhere.

The tone was set on Turn 1 when Schneider's brigade defending the Ács wood on the Austrian left rolled snake eyes and abandoned its abattis. This forced a swift change in the Austrian players' plan. They had intended Schlik to lend some support to Wohlgemuth in the centre, but instead had to commit his whole corps - and all the reserve artillery - to hang onto the wood. 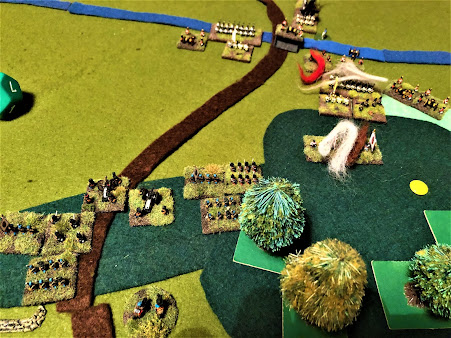 Hungarians establish themselves in the southeastern part of the Ács wood. Upper right of picture, Sartori's brigade is disrupted but manages to retain a crucial toehold to prevent the Hungarians claiming the objective - the Habsburg yellow counter stays!

In the centre, Wohlgemuth held Herkály puszta as a bastion. The Hungarians chose not to storm his gun emplacements for the time being but flowed around it and took Csém puszta in the south. 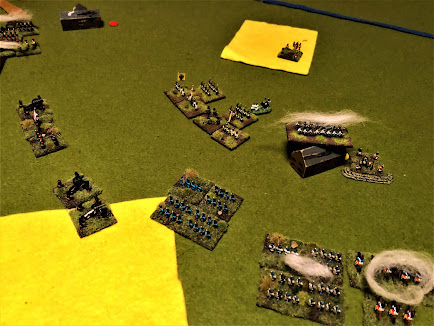 Hungarians mass in front of Herkály puszta, waiting for the right moment to assault. Top left of photo red counter shows that the vacant Csém puszta has fallen to the hussars. 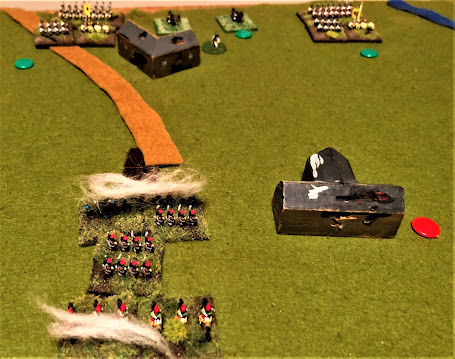 Close-up of Csém puszta. The Polish Legion and their supporting hussars, somewhat disordered after seeing off Ludwig's cavalry brigade, await the arrival of Panutine's Russian division. (Figures are Austrians - green counters denote that they are supposed to be Russians - my Russians are in a box somewhere.)

In the east (the Austrian right), Bechtold and Wolf faced off against most of Nagysándor's corps, much as they did historically.

Stalemate in the east: infantry trading shots across the Szilla stream, cavalry eyeing each other warily.

Turn 4, the last move of our first evening's play, was a critical one. There was a moment when a reasonable movement roll would have enabled Rakowsky's hardcore veteran brigade to assault the last discomfited Austrian defenders of the Ács wood, with a high chance of ejecting them and claiming the wood for the 'high water mark'. Instead, Rakowsky remained disrupted and vulnerable to the ensuing Austrian counterattack, and an Austrian brigade began sneaking along the bank of the Danube towards the Hungarian fortifications. 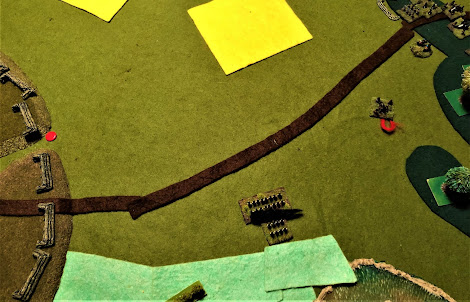 Sneaky Landwehr dodging roundshot from an understrength Hungarian battery as they sidle past the Danube vineyards.

Battle resumed a week later. Two of the three Hungarian players were now on holiday, leaving Graham to hold off the Austrians alone. His situation looked grim but he put up a spirited fight. The stand-off on his left continued. On his right, he was gradually driven out of the woods, and Reischach's Landwehr managed to steal into his redoubts. Fighting raged in the centre. The Hungarians threw Jablonowsky out of Herkály puszta. The Austrians rallied, brought up their gun line, and counterattacked. The Poles held up three times their number of Russians for three hours before giving way. The 'red kepis' stormed the Austrian artillery and scared off half of the guns. Hungarian musketry held off one counterattacking brigade, but could not stop the other. It piled into the disrupted, depleted defenders who, low on ammo, were forced to concede the objective. 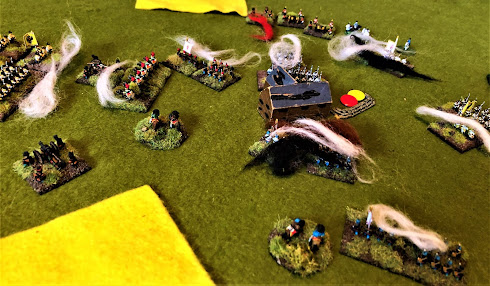 The end result: the Hungarians had held the necessary five objectives at one time or other, but only retained two at game end, one short of their target, thus it was an allied victory. Still, it was a much tougher job for the allies than had seemed likely at half-time, and it took Reischach's improbable infiltration of the Hungarian redoubts to swing it. It certainly produced an exciting finish.

The simple yet subtle BBB approach to command & control proved its worth. Making some of the Hungarian army Passive and just giving it two corps Generals and no C-in-C worked well to recreate its poorly coordinated performance on the day.

A wargame can change your view of the history. Nagysándor and Bechtold get criticised by historians for pinning each other and not intervening more actively in the decisive sector. Yet when it comes to moving their troops on the table, you can see why they acted that way and how it could have gone badly if they had done as their critics advocate, and perhaps have more sympathy for them accordingly. This is not the first time a BBB game has given such an insight.

Objectives: setting these can make or break a scenario. In this case, the number of them and their distribution around the table resulted in the game reproducing the shape of the historical battle reasonably well, while providing interesting choices and challenges for the players. Deciding what number of objectives constitutes victory was tricky but history provides a 'par score', and I'm happy with the targets this scenario sets now.

How much should casualties matter? As Graham said, at half-time it was obvious that he wasn't going to break through, so realistically he would have preserved his army and pulled back behind his entrenchments. But then you'd think you could say the same for Klapka, yet the historical battle went on for eight hours, I suppose partly because it was fought across such a wide area and it was hard to get the full picture or to react quickly to change it. There's certainly a case for including casualty totals or ratios in the win/lose equation, but as a general policy I prefer not to, as discussed on this blog before.

Never give up! Even though things looked dire for the Hungarians at half-time, they came within a couple of dice of salvaging a draw or even snatching victory. Time-limited scenarios and the vagaries of the movement and combat tables mean there is usually a chance, albeit a small one, of extreme rolls changing fortunes.

A new player is refreshing. Mike fitted right in. He'd done his homework and read the rules beforehand. Happily, BBB seemed to hit his 'sweet spot' with its balance of big battle manoeuvre and tactical flavour. And of course, it's always good for a new player's morale to end up on the winning side.

Next up will be a change of scene as we finally leave Komárom and move to the southern front for a corps-sized ambush: the battle of Hegyes.