This week we went to chapel. No, we didn’t really - all the chapels are shut. However, ‘Kápolna’ is the Hungarian word for ‘chapel’. It is also the name of a small village on the main highway that runs east from Budapest. Two 30,000-man armies collided here in February 1849, providing #4 in our series of refights from the Hungarian War of Independence. (The others have been reported here too; the most recent one was Hermannstadt.) 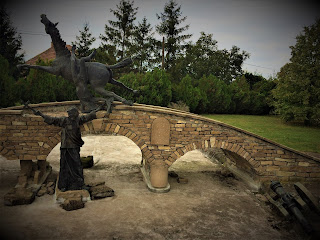 The monument at Kápolna depicts the Hungarian army's chaplain
leading the counterattack in full ecclesiastical garb.

The battle of Kápolna was preceded by some remarkable strategic manoeuvres. When the Austrians invaded Hungary, Görgei’s corps defending the frontier refused battle. Instead, Görgei conducted a skilful retreat through what is now Slovakia, fighting the occasional rearguard action. The Austrians hoped to trap him between the pursuing forces and Schlick’s division invading from Galicia. However, Görgei not only eluded the pursuers but turned the tables and almost pinned Schlick against Klapka’s Hungarian corps approaching from the southeast. Schlick narrowly escaped to the west.

When Görgei and Klapka combined, they were subordinated to the hopeless Pole, Henryk Dembinsky, chosen for political reasons rather than competence. Dembinsky advanced toward Budapest to eject the Austrians from the capital, which they had occupied in January. The fact that he refused to tell his subordinates his plan suggests that he did not have one. On the eve of the battle, not expecting an attack, he had mixed up his different corps and dispersed their divisions across a wide area (probably so they could find shelter against the bitter February weather).

The Austrian commander-in-chief, Feldmarschall Windisch-Grätz, was generally very cautious. However, on this occasion he had acted decisively. Realising the Hungarian army was concentrated east of Budapest, he marched out to pounce on it with most of his army. He also liaised with Schlick to arrange for the latter to descend from the mountains against the Hungarians' right flank while W-G attacked their front. 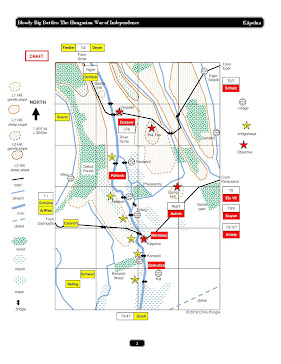 In game terms, this produces a very entertaining scenario. It is an L-shaped battle, with varied terrain and low enough troop density to allow - indeed, oblige - manoeuvre. Both sides get to bring on reinforcements, both sides have choices to make about where to move, and both sides have to do their share of attacking.

It is also colourful, in that it features many of the units that devotees of this war particularly love: the Polish Legion, the German Legion, the Viennese Legion, the Tyrolean Jaegers, rockets, honveds and national guards; Austrian jaegers and Croat grenzers; formidable cuirassiers and dashing hussars.

We fought this battle four years ago, as reported here. The same battlemat was rolled out again for this week's remote game. Csorich's Austrian division was commanded by Colin, whose dice are usually dire. Not so this time. Devastating cannonades and musketry blew away battalion after battalion of hapless honveds. Day 1 belonged entirely to Austria, so the Hungarians fell back behind the Tarna, though they still occupied Kápolna  itself. 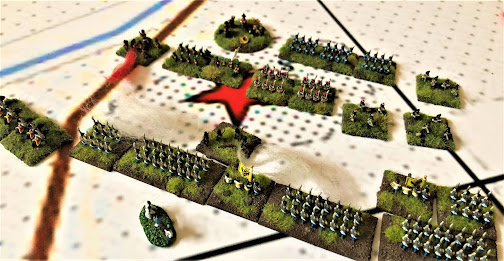 Day 2 started badly for them as well, as Schlick's grenzers, fresh from massacring prisoners at Petervasara, arrived on the northern end of the battle and overwhelmed Dessewffy at Verpelet. Schlick's cuirassiers rode ahead to sit on the commanding hill of Ilka Top. Meanwhile, Wrbna's gun line pummelled the defenders of Kápolna.

Hungarian reinforcements rushed up to try to turn the tide. Some bolstered the line around Kápolna. Others raced toward Ilka Top. It all shaped up to climactic collisions on the last turn. In the south, the Austrians were poised for a mass assault on Kápolna; in the north, Hungarians (and Poles and Germans) mustered to counterattack on Ilka Top. Crunch! Against the odds, both assaults were repelled - a slightly anticlimactic end, but nevertheless it had been a tense finish to an exciting game. 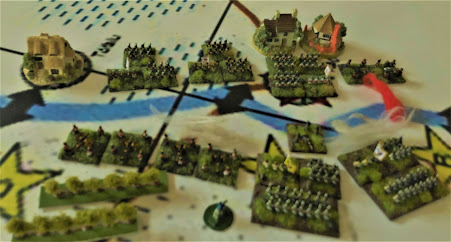 Austrians poised for their mass assault on Kápolna.
Apologies for shaky camera work - it must have been the excitement.

- Our campaign is rocking along: 6 games since the end of December (including 2 replays). I seem to be benefiting from having a captive audience.

- Giving the players short briefings about the campaign context and events linking the battles helps  to bring them to life. (The battles, not the players.) So too do character sketches of the generals' personalities. "OK, Puchner is old and ill - anyone feel like playing him?" "Wrbna has been soured by 30 years of peacetime garrison, his subordinates can't stand him, after the war he shoots himself ..."

- The snowy battlemat was a boon, super-easy to set up, and easy for the players to see the troops against it.

- The scenario is a very good one, plenty of choices and movement for both sides, full of replay value.

- The scenario includes a special rule to reflect the historical dislocation of the Hungarian defence by moving a random division to the wrong side of the river after deployment. This is similar to the dislocated defensive deployments at Gettysburg and Koniggratz. Starting dislocated compels the defender to move - a good thing in a game.

- The draft victory conditions provided 'double jeopardy' for the Hungarians: if the Austrians reached certain locations on Day 1, their good fortune in doing so would be doubly rewarded by giving them a victory point as well as forcing the Hungarians back. Bad idea, now amended.

- My players seem to have absorbed the doctrine of the time, commencing battles with an artillery duel between massed batteries.

- Extra photos this time as demanded by 1,000s of eager readers of this blog (thanks, Al).

PS The long-awaited book 'Hungary 1848: The Winter Campaign' which includes a very detailed account of this battle should be going to print imminently - page proofs approved, index finished this week.