This post is to showcase my beautiful new 1/300 scale (6mm) Hungarian army for wargaming the Hungarian War of Independence of 1848-1849. The figures are from Baccus (mostly adapted from their American Civil War range), painted and based by the talented Richard Morrill, flags by Maverick Models. My camerawork can't really do these little works of art justice, but still, here they are in all their glory:

The generals: Poeltenberg in green, Gorgei in red arguing with Dembinski in the red hat, etc.
Figures from the ACW generals pack. The broken cannon wheel is a nice touch.

A rabble of rowdy rebels! Militia armed with scythes and pitchforks. These featured in the battles of Schwechat and Temesvar in particular. You have to admire Richard's work on the red-white-green polearms and the embroidered waistcoats. Figures are English Civil War peasants. 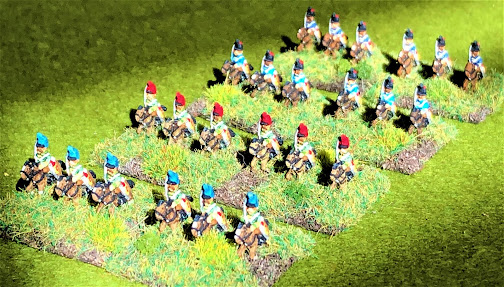 Former imperial regiments raised in Hungary provided a core for the new Hungarian army. They kept their white tunics initially but changed the flags, braid and badges. Oh, and Richard painted the red-white-green sashes around the officers' waists! Austrian infantry from the Risorgimento range. Not quite the right shako for the 1840s, I know, but in 6mm you can get away with a lot.

Hungary's own new army was the honved (roughly 'home defence'). The standard uniform was blue kepi, brown tunic and blue trousers, but there were quite a few variations, as shown here: red or white kepis, black shakos, grey tunics ... Check out the red braid on the officers' chests, more fine brushwork by Richard. There are also a few conversions: these are ACW Union figures who came with more standard-bearers than I needed, so Richard converted the surplus ones into sword-wielding officers.

Not the best troops in the army, but some of the prettiest: national guard units in bright blue, green and grey varieties. Figures are ACW Union troops in frock coat. Amazing paintwork on these tiny characters - Richard has used shading and highlighting!

Last but not least, some 'exotics'. The Polish Legion are ACW Union in frock coat, with tiny squares of cardboard to turn their kepis into red czapkas. Next to them, ACW infantry converted into grenadiers. Those greenstuff bearskins are textured and have had recognisable grenade badges painted on them!
Front row left to right: Tyrol Jaegers with their distinctive red-white-green feather; German 'Death's Head' Legion; and honved jaegers in grey and brown varieties.

The army is based for use with the "Bloody Big BATTLES!" rules. You will find reports of many Hungary 1848 BBB games on this blog (use the label "1848" to find these).

For uniform references I relied on Zoltan Barcy & Gyozo Somogyi, "A Szabadsagharc Hadserege", and Ralph Weaver, "The Hungarian Army 1848-1849".

Richard's talents are in high demand, so if you want him to paint an army for you, you might have to queue for a few months (I did). However, he tells me it does depend on the size and nature of the order, and the best advice is to get in touch and he'll see what he can do. His website at Monty's Wargaming World has his contact details, as well as loads of info and links to photos.

I hope you've enjoyed this parade of an unusual and colourful army. If you want to learn about the actual historical army's exploits, let me modestly steer you towards my book, Hungary 1848: The Winter Campaign.