Happy New Year to all of you! May it be a better year than the last one. 2020 was a bit of a desert  wargaming-wise. OK, that's not one of the bigger problems COVID-19 has caused, but it is the pertinent one for this blog.

I am therefore pleased to report that we did manage to end the year on a relatively high note. Earlier in the year I'd run some PBEM games (play-by-email) with players sending orders and getting reports every day or two and the games taking a couple of weeks. Last week I had my first go at running a game played remotely in real time: that is, two players looking at the table through my laptop camera, telling me where to move their troops, and rolling their own dice for me to implement the results.

The battle I chose was Pakozd (1848). One reason for the choice is that it is a small game: a 4'x4' table, only 9 or 10 units a side, and only 8 turns, making it ideal for this first experiment with the remote format. 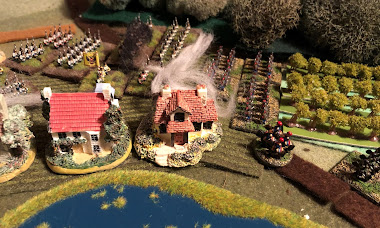 The village of Pakozd, on the shore of Lake Balaton, is wreathed in smoke as Croat Grenzers clash with Hungarian honveds. (Forgive the Austrian line infantry standing in for Grenzers and the Frenchmen pretending to be Magyars.)

The other reason is that it is the first battle in my project for the year: to fight through the entire Hungarian War of Independence of 1848-1849. As regular readers of this blog will know, this has been a major interest of mine for the past few years, and I have one book on it forthcoming (an annotated translation of the Austrian history of the Winter Campaign, the first half of the war) and others in preparation. The ambition for 2021 is to playtest the set of scenarios I've written for all the main battles of the war and then publish them in a BBB campaign volume.

Two of my regular gaming buddies, Dave W and Crispin, both share my enthusiasm sufficiently to have painted up their own armies for this conflict. They were therefore the obvious candidates to invite. Dave commanded the Hungarians defending their homeland; Crispin took the part of Jellachich leading his army of Croats to remind the Hungarians of their duty to the Kaiser.

Pakozd is a small battle but one that was full of colourful incidents: diplomatic envoys, parleys being respected or otherwise, whole units of Croat Grenzers disappearing into the wine cellars, a huge flock of sheep released from a barn and causing mayhem ... The BBB scenario reflects this with a random events table. Together with the low troop density and resulting room for manoeuvre, plus the quality vs quantity disparity, this made for a real see-saw game. Fortunes swung radically and at different points in the game, both Crispin and Dave thought the writing was on the wall for them. In classic BBB style, it came down to the final assault on the final turn. The Hungarians were ahead by a nose, but if the Croats could successfully charge the last lone national guard unit on the Hungarian right, they would level it; if they could exploit and capture the village beyond, they would transform defeat into victory. In the end, luck favoured the Magyars, but really it could have been anyone's game.

This was a success in every respect: a highly entertaining wargame; the technology and remote format worked (we finished it in about two and a half hours' play); and of course, it was great to catch up with good friends I have seen too little of for a while.

We're going to try expanding it to four players next time, which is probably the limit if everyone is to get a decent share of the game. Next stop will be the battle of Schwechat, just outside Vienna. Onward!