This was the second battle in our Hungary 1848 campaign: Schwechat. Historically, it's an unusual situation that makes for a different tabletop challenge. The Hungarians had kicked out an invading Croat army. Rather than retreat to Croatia, the Croats had headed for Vienna to join the imperial army gathering there. Meanwhile, the city of Vienna had risen in revolt against the Kaiser. The Hungarian army was a rather ragged mix of line troops, newly-raised honveds, and scythe-armed national guards; and it was divided between those who wanted to help the Viennese revolutionaries and those who thought it wrong or unwise to invade Austria and turn Hungary's self-defense action into outright rebellion. A false alarm during the night before the battle generated a wild goose chase night march for part of the army, which made it even more fatigued and frustrated. It therefore failed to breach the Croat line at Schwechat and was then routed when reinforcements arrived from the imperial forces besieging Vienna. The revolutionaries did not join in. 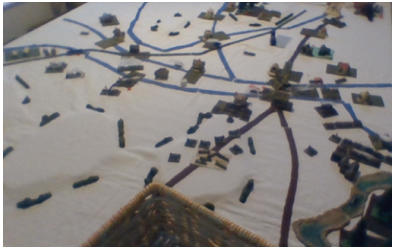 Balloon-basket view of the Schwechat battlefield: 6mm figures seen from a distance through a laptop camera, thus creating very realistic fog of war ... the roads are the Hungarians' axis of advance, with Vienna off-table top right; the Hungarian armed paddlesteamer Meszaros on the Danube bottom right; Croats are defending the line of the Kalter Gang river. Schwechat is where the roads cross the river. Hungarian massed guns on the hill in the centre, supported by scythe-armed rabble.

This is a tricky situation to represent in a scenario. My first effort didn't really work, as I reported back in 2016 (complete with Hungarian poetry). I revised the scenario after the playtest back then; I reviewed it again and refined it further before our game this time. The distinctive ingredient is the rate at which reinforcements become available to the Austro-Croat defenders. The Austrian players can choose which of the available reinforcements to commit to action and when. This in turn affects a Hungarian decision about when to see if the Viennese will attempt a sortie; they only get one shot at this, and the more troops the Austrians have withdrawn from the besieging force, the greater the chance of a sortie.

I'm pleased to say this generated a cracking game for my four remote players plus two interested observers. As for the previous battle, Pakozd, we just used simple online meeting software and my laptop camera. Once all the players turned off their own video feeds so the battlefield filled the screen, this worked OK. A serendipitous factor helped. Although Schwechat was fought in October, I set it up as a snowy battlefield, using hedges dotted around the hills to outline them. The dark troop blocks and terrain features were very easy for the players to see against the white background and compensated to a degree for the somewhat distant and fuzzy panorama view. Usually in our multi-player BBB games things happen in parallel, as the players on one side can all carry out their moves at the same time. For the remote game, of course, we had to operate in sequence as I had to move all the troops. (The players got to roll their own dice, though - we're a trusting lot.) This necessarily made the game take a bit longer but we still finished it in an evening. And I got my 10,000 steps of exercise by running round the table.

The Hungarians attacked with a very clear plan. They raced forward, daring the Austrians to come out and attack their march columns (they didn't), then setting up a grand battery on the hill on their centre-right. Consequently their left was largely unprotected, inviting the Austrians to attempt a right hook against the objectives on the vulnerable Hungarian line of communications. The Austrians did venture their cavalry forward vaguely in this direction, but seemed unsure about what they were trying to achieve. As a result, one of their two potent cavalry brigades wandered into range of the massed Hungarian guns, got pinned down, and was duly wiped out. The other could still have got around to the Hungarian rear but opted not to, so it was eventually driven back and held off by superior numbers of hussars.

While the Austrian right hook was being rebuffed, the Hungarian attack on the Austrian left was having little more success. The honveds seemed reluctant to assault the Grenzers defending Mannswoerth; they pushed into the gap between Mannswoerth and Schwechat, but were repulsed with heavy losses.

This relative stalemate took us to turn 7 out of 8. The Hungarians had inflicted significant casualties on the Austrians, but had yet to take an objective, so were behind on points and time was running out. Meanwhile, several brigades had been released from the imperial siege lines, including their crack grenadiers, more cavalry and several batteries. Turn 7 was crucial and exciting: the Hungarians finally stormed Mannswoerth and also took Zwoelfaxing, another of the strongpoints in the Austrian defensive line. The Austrians were in a good position to retake the latter, but the dice were unkind and their counterattack could not go the extra yard. They had also miscalculated concerning their reinforcements: they committed several regiments, but too late for them to actually reach the places where they were needed. However, this emboldened the Viennese, who drove the last nail into the Austrian coffin on the final turn by surging out of Vienna in force and seizing another objective at Simmering.

Reflections, then (taking my cue this time from Steve J's excellent format for his Wargaming Addict AARs):

- The remote format worked when scaled up to four players. More than that would probably be too many, but having four (and a couple of observers) made it an even more convivial social occasion than the previous 2-player game, very jolly indeed. We spent a good half-hour at the half-time drinks interval just nattering.

- The white battlefield was very helpful and I may well use it again, regardless of whether it was actually snow-covered historically. A north pointer could be useful for next time as some players got confused when giving directions. ("Northeast, I mean southeast. Left a bit. No, the other left ...") Need to give some thought to how to help distinguish units at a distance: big coloured counters? Use larger figures? (Dave W has 10mm armies which would be a bit more visible than my 6mm.)

- The scenario was very successful in producing a close and exciting game. The revised rule for Austrian reinforcement release and Viennese sortie worked well. (Draft version of the scenario in the BBB group files.)

- It's tricky for a scenario to capture how brittle the Hungarian army proved to be. The Hungarian players did a good job of letting their solid line troops do most of the fighting, shielding their extra-fragile honveds and national guard. Even so, and despite the sound Hungarian plan, by the end of the game their infantry was definitely running out of steam, so we figured the scenario is pitched about right.

- One of the guys said of the remote gaming under lockdown, "it's kinda like therapy" ... it was a brilliant fun evening.

Chronologically, the next major battle of the war was around Hermannstadt aka Nagyszeben aka Sibiu, which has since moved to Romania. Next stop Transylvania!