I have been travelling a bit lately. Downside: not much wargaming. Upside: I was in Lisbon and was able to visit the Lisbon military museum. According to the Lisbon Portugal Tourism Guide page about it, "maybe not too many people are interested in its theme, but no one leaves disappointed"! I'm interested ... and I wasn't disappointed.

The museum isn't organised chronologically but that doesn't mean this brief and far from exhaustive report can't be.

Pre-Napoleonic: quite a lot of morions and halberds and other stuff that goes ding-clang; not my period. I liked the very early artillery though.

Napoleonic: actually I expected even more, but there is still a very decent and substantial section on this.

C19 colonial: some interesting bits and pieces about this little-known (to a lot of us) historical chapter.

WWI: lots on this, about both the Portuguese expeditionary force on the western front and the colonial fronts. Very good.

Artillery: I believe the museum was once an artillery school and it has lots of cannon.

For much fuller reports than my cursory effort above, and with lots of photos, see Bob Cordery's two reports from 2014 here and here.

Just four photos to give you a taste: 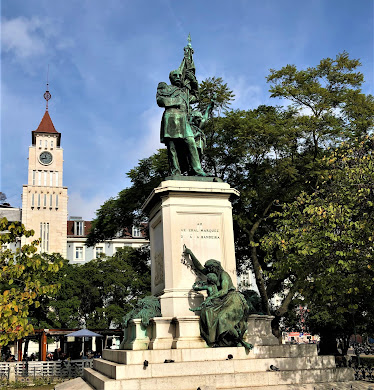 Not actually in the museum but on the way. One example of the many fine pieces of statuary with which Lisbon is endowed. This is the Marquis of Sa da Bandeira, a veteran of the Napoleonic Wars who fought in the Portuguese internal conflicts in the 1830s and subsequently served as prime minister.

A poor photo that doesn't do justice to the fine Peninsular War exhibit. Lots more weapons, equipment, paintings, and a relief map of the lines of Torres Vedras. 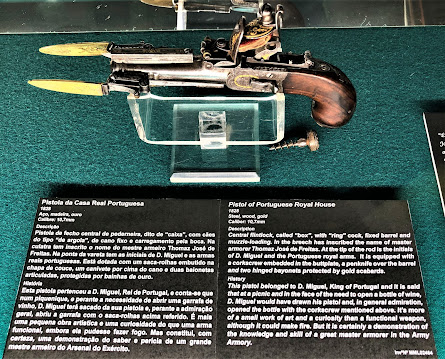 I'm sure we all know someone who could use a pistol like King Miguel's, with its corkscrew attachment. It has been suggested the twin bayonets mean it could be doubly useful at a barbecue, skewering sausages as well as opening bottles. 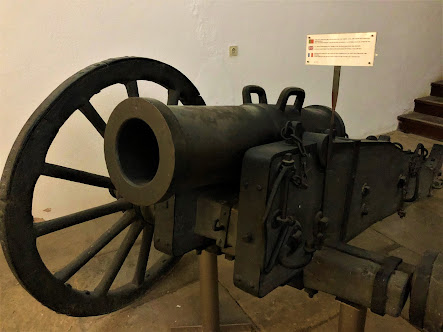 And finally: a French howitzer taken at Vitoria.

Email ThisBlogThis!Share to TwitterShare to FacebookShare to Pinterest
Labels: museum