Been an intense couple of days wargaming-wise. Sunday: my second ever visit to the wonderful Joy of Six show; Monday: a tense and exciting BBB Austro-Prussian War battle.

Joy of Six, for anyone unfamiliar with it, is (in normal non-COVD years) an annual event in Sheffield UK run by the excellent folk at Baccus. It is dedicated entirely to wargaming in 6mm scale. I went along with my old friend Colin and new recruit Luke. I was committed in advance to helping Tim Carne run his Gettysburg game. However, the day before the show I learned that a game had dropped out, so I decided to throw a box in the boot of the car in case. A good move, as it turned out. When we arrived I was introduced to Pete of Baccus, asked him if he'd like another game, he said yes. Fortunately, the gap in the ranks was next to Tim's game. I'd brought a specially printed battlemat so we were able to roll out the battle of Isaszeg (1849), from the Hungarian War of Independence, and set the whole thing up in about 10 minutes. That done, I left a note on the table saying to find me next door at Gettysburg.

Tim's game was much admired, especially his very effective woods - cut from soft 'pebble' bath mats and sprayed green (I guess this one from Dunelm) - his armies were very nice too and the whole layout looked good. Special mention of his ingenious and convincing cemetery arch. He had a regular stream of interested persons passing comment, asking questions, taking photos, and of course a number actually sitting down to play. The game rocked along; the Union lost several units entirely quite early on and even with copious reinforcements never really recovered from those setbacks, so the Confederacy managed to reverse history. But it's more about the journey than the destination and all the travellers aboard seemed to have a good time. Meanwhile at the Isaszeg table, in the afternoon Colin introduced Luke to his first game of BBB. We talked to a lot of people and evidently the two BBB games provided a lot of ideas and inspiration. The fact that our layouts were simpler than the many more lavish productions was a nice contrast and showed games that were very 'do-able' for the average gamer.

In between whupping them Yankees, we did manage a tour of the show, drinking in all the wonderful sights on display. Others have done good photo reports, eg Whirlwind's here or Ithoriel's here, which is just as well as I didn't take any pics. I particularly liked Per's Swedes in the snow; the fabulous Imjin hills and paddy fields; the Khorramshahr cityfight; the CWC townscape ... there were plenty of traders present too, apologies to them that they didn't get any of my £££ this time, but I'd like to think I steered some custom to them indirectly by stimulating others to start new projects.

All in all it was just a great day, enjoyed equally much by newbie Luke and old lags Colin and me. So good to catch up with so many old friends and new and to enjoy such a feast of 6mm goodness.

Then it was back to the club for a regular Monday night's gaming. Crispin laid on the sequel to last week's Nachod game, Skalitz. Like Nachod, this was one we had only fought once before remotely as a PBEM. I'd revised the scenario a bit on the strength of that first playtest. The new version gave us a game that was very one-sided in terms of casualties - just like the real thing - but utterly gripping game-wise. The tension came from the fact that the Prussians were up against the clock. Turn 6 was the first deadline, by when we (the Prussians) could achieve an early victory if we could take 3 objectives. It was a turn of high drama as we launched mass assaults which took a second but just failed to capture the third. On to the next deadline, then: Turn 8, by when the victory count was four. On Turn 8 we stormed into two objectives to take our total to five; Austrian counterattacks ejected us from one, but narrowly failed to retake the other. Thus we won a turn early. Had their second counterattack succeeded, that would have taken us into a final Turn 9 in which we would have needed to recapture both and claim all five objectives for victory - by no means guaranteed.

The Austrian army was thoroughly battered, though, and the Austrian players did query the scenario balance. I may have over-corrected after the previous playtest, but on reflection I think perhaps not. The Austrians were unfortunate not to inflict a couple more casualties on our Prussians by fire in the early turns, and they launched some assaults mid-game that could have enjoyed more success than they did, yet the end-game was still pretty tight. OK as it stands, I reckon.

There now follow half a dozen photos of the Skalitz game with brief captions. If those don't excite you, I suggest you skip past them to find two sets of Reflections: first on Joy of Six, then on Skalitz. 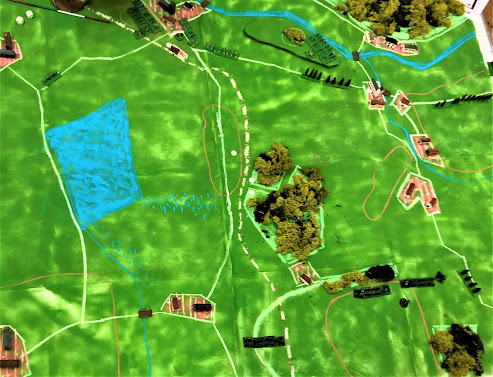 The battlefield. Austrian columns are visible around the top centre of pic (west edge), about to push forward to meet the thin dark blue lines of Prussians arriving from the east (bottom of pic). The five objectives are the two woods in the centre; the gentle rise south of them (brown contour line with a white objective counter); Zlitsch (the church upper right); and Skalitz station (top left/centre). The Prussians also earn an objective if they kill both Austrian cavalry units, which explains why those stayed well out of the fight until the desperate last turn. 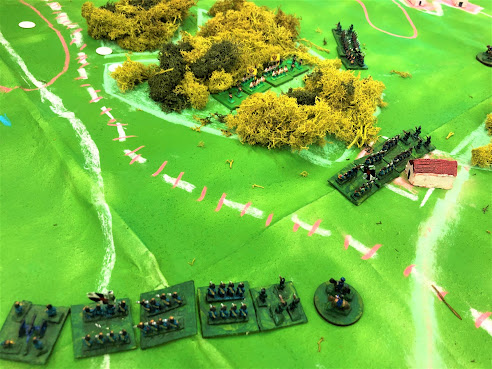 The Prussian advance guard moves to envelop the Austrian jaegers' outpost in the woods. The numbers don't look good for the jaegers but they are playing at home. They lasted a fair while. 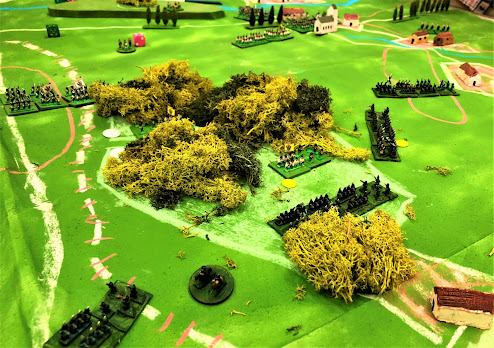 Austrian columns arrive to beef up the jaegers' resistance and hold the forward position until Turn 6. Other Austrians lurk around the Prussian flanks, hence those Prussian flank units facing out. 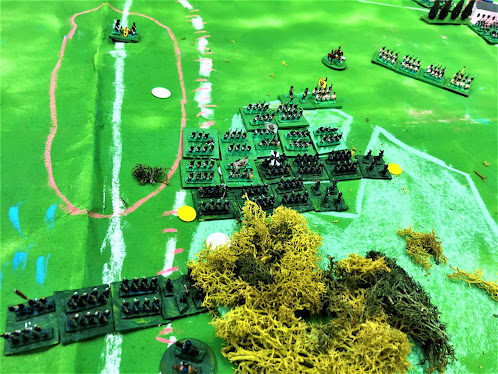 Smash! Charge and counter-charge as the Prussians try to expel the Austrians from the woods and capture the adjacent rise. The Austrians get a bonus in the assault for their Stosstaktik - but only if they manage to survive the defenders' fire and close with the bayonet. 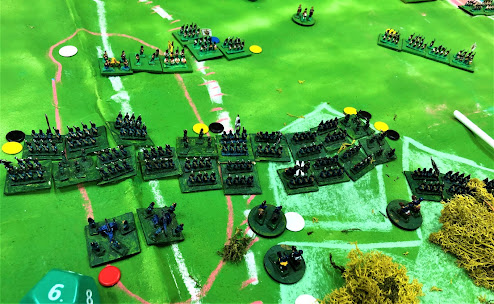 The crucial Turn 6 and there are a lot fewer Austrians than there were. That is largely explained by the black counters indicating Prussian units now low on ammo, having done much execution. (Yellow is disruption, blue is spent because of casualties, red indicates a half-strength artillery unit.) The Prussians haven't quite managed to clear the Austrians off the rise, though, and suffered some casualties of their own in the attempt.

Two turns later and the Prussians have just managed to achieve their victory condition. The woods and the rise have been taken. Zlitsch is still Austrian-held, but the station has fallen and the cuirassiers and jaegers in the south were unable to retake it. Game over, man!

Reflections on Joy of Six

Great to be back at a show again! Looking forward to my next one already (Colours, Newbury, 10 September - be there - free entry this year!).

Apart from the actual gaming, it is so stimulating to meet and talk with fellow gamers about all and sundry, including some legendary names in our hobby. Thank you to everyone who stopped by our two games to roll dice, to chat and share ideas, or just to say hello.

6mm has been my preferred scale since I was a teenager and I still love it. If I were to start again now, I might go with 10mm which still provides the mass battle effect I want but is easier for older eyes ... but I'm so invested in 6mm that I'm not changing now. It's still brilliant.

Huge kudos to Pete and Lindy of Baccus for such a wonderful show - and congratulations and best wishes for their impending nuptials!

A super game for a Monday night, large enough to be interesting, small enough to be done and dusted in a couple of intense hours.

Asymmetry! Said it before, say it again: clashes between very different armies in terms of weapons and doctrine make for tactically interesting games.

The unusual victory conditions added extra drama. Usually it's saved up for the last couple of turns, but this delaying action scenario's phase lines meant more high points along the way. It could have backfired, I suppose: if we had actually taken three objectives for an early victory on Turn 6, we'd have been finished half an hour earlier, which might have been a bit deflating. So I wouldn't script every game that way, but for this one it worked well.

Potential campaign day? Dave W suggested running the two pairs of Bohemian border battles - Nachod & Skalitz, Trautenau & Soor - as linked micro-campaigns all on the same day, with teams of players rotating among them. People at Joy of Six were also asking about when we might run the next BBB Bash Day (our plans for Bash Day IV having been scuppered by COVID-19). Won't happen this year, but we should definitely start thinking about Bash Day IV for 2023.