I am delighted to record that my book "Hungary 1848: The Winter Campaign" was published today. 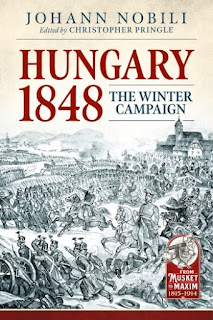 I believe this fills an important gap in the English-language literature on a major conflict that deserves to be better known. I hope readers will judge my efforts kindly.

As an indication of what the book's 371 pages contain, here is a sample map (no, the red panels aren't part of it, I've added them to highlight its key features) followed by the table of contents: 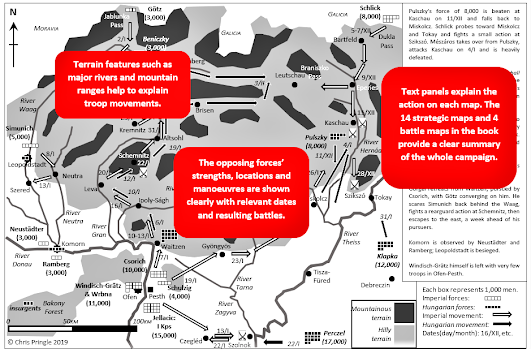 Chapter 2: Events from the occupation of Ofen-Pesth until after the battle of Kápolna. The period from 6 January to the beginning of March 1849
The situation after the occupation of Ofen-Pesth, 6 January 1849
Wrbna takes Waitzen, 7 January
Ottinger takes Szolnok, 13 January
Rear security and the Mining Towns, 30 December 1848 to 10 January 1849
Csorich hunts Görgei in vain, 10-15 January
Concern for Simunich and Neustädter, 13-14 January
The Feldmarschall orchestrates Simunich, Neustädter and Csorich and reinforces Schlick, 16-21 January
Görgei eludes Csorich, 17-22 January
Events in the rear and on the Theiss, 13 January to 1 February
Csorich takes Schemnitz and returns to Pesth, 20-29 January
Miscellaneous troop movements, 25-30 January
The general situation at the end of January 1849
Schlick’s operation against Tokay, 19 January to 1 February
Events around Leopoldstadt, Komorn, and rear areas, 31 January to 9 February
Events in the south, 30 January to 20 February
Events on the middle Theiss, 1-12 February
Upper Hungary: Görgei escapes the trap; Schlick eludes Görgei, 29 January to 29 February
The lead-up to Kápolna: co-ordinating with Schlick, 15-24 February
The lead-up to Kápolna: covering the right flank, 15-24 February
Final prelude to Kápolna, 25 February
The battle of Kápolna: the first day, 26 February 1849
The battle of Kápolna: The second day, 27 February 1849
Aftermath of Kápolna: pursuit to Mezö-Kövesd, 28 February to 1 March
The Hungarian army escapes through Poroszló, 1-2 March
The imperial army shifts back to the middle Theiss, 3-7 March

Chapter 3: From the start of the army’s concentration on the middle Theiss between Szolnok and Pesth until the recall of Feldmarschall Fürst zu Windisch-Grätz from the army high command. The period from the beginning of March to 14 April 1849
I. Armeekorps is driven out of Szolnok, 5 March
The Hungarians avoid being counter-attacked at Szolnok, 6-10 March
The imperial army shifts southward and reorganizes, 10-12 March
Abortive preparations for a reconnaissance in force across the Theiss, 14-17 March
The brief Hungarian foray from Czibakháza, 17-19 March
The new Hungarian plan to debouch through Poroszló
The Feldmarschall prepares to receive the new Hungarian attack, 19-25 March
Events on other fronts, 10-25 March
Hungarian plans and order of battle, 25 March
Schlick’s reconnaissance in force: The action at Hatvan, 2 April 1849
The Feldmarschall concentrates around Gödöllő, 2-4 April
The Feldmarschall’s reconnaissance toward Hatvan and the deployment at Gödöllő, 5 April
The battle of Isaszeg, 6 April 1849
The retreat to Pesth, 7 April
Hungarian forces and movements leading up to the battle of Isaszeg, 25 March to 6 April
The siege of Komorn progresses; reinforcements arrive; and events on the southern front, 29 March to 10 April
Screening Pesth 8-11 January and the action at Waitzen on 10 January
The Feldmarschall’s last plans are thwarted by his subordinates and then he is removed from command, 12-15 January
Hungarian dispositions, 7-18 April
Concluding remarks
The Feldmarschall’s farewell messages

Epilogue: Events on the Main Front from 15 April to the Beginning of May 1849

I am pleased to say that my excellent publisher has been sufficiently impressed (or at least, advance sales have been strong enough) to sign me up for the sequel: "Hungary 1849: The Summer Campaign". I have already finished the translation but still have to tackle the substantial task of creating the maps. I expect to deliver the final manuscript to Helion later this year for publication in 2022.

Finally, just a reminder of my three recently published Clausewitz translations in collaboration with Professor Murray of the US Naval War College:

The Coalition Crumbles, Napoleon Returns: The 1799 Campaign in Italy and Switzerland, Volume 2