Back in 2017 I wrote an article for Miniature Wargames, published in issue 411, about the process of researching and designing a historical scenario. The battle I used for this case study was Nagysalló, 19 April 1849. It's a promising situation for a wargame because it starts small - a few Austrians clash with a Hungarian party gathering rations in the village of Nagysalló - then escalates as both sides feed more troops into the fray until there are over 20,000 men a side. This means there is room for manoeuvre and both sides need to do so. 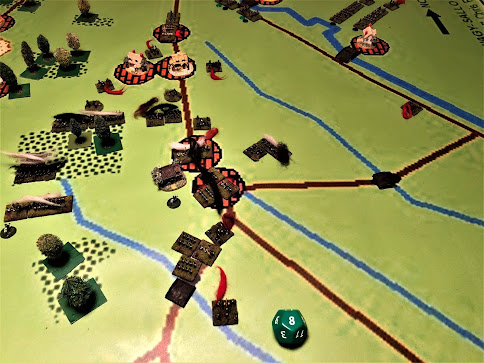 Situation at game end, looking north from the Austrian end of the pitch. The prevalence of black smoke marking spent units indicates how bitter the fighting was. Austrians hang on in Nagysalló in the centre; Hungarians are surrounding it on north and east, and in the wood to the west, but unable to break in.

The scenario has a special rule that works very well and could be adapted for other battles in many other periods. In this action there was a lot of fog of war and uncertainty about enemy strength and dispositions. Therefore, rather than have reinforcements arriving on a set schedule, they only turn up on a high die roll. Nothing innovative about dicing for reinforcements, of course; the distinctive rule is that whoever holds the focal point, Nagysalló, gets a plus on their dice. This reflects the commanders' willingness to reinforce success or, conversely, reluctance to get too heavily engaged if things seem to be going badly: "Good news, sir - Klapka has driven the enemy out of the village!" "Excellent: send VII. Corps cavalry forward to exploit his success!"

We had so much fun with this scenario when I first wrote it that Dave W commissioned a battlemat for it. He has run it as a convention game at the Warfare show. It was therefore a simple task to set up my table to fight Nagysalló as the next instalment of our ongoing Hungary 1848 campaign.

The battle picture is that an Austrian corps is spread out a little way behind the River Garam trying to screen the Austrian siege of Komarom (at that time, I think, the biggest fortress in Europe). Three corps of the main Hungarian army are crossing the Garam to relieve Komarom. The game begins with just a few brigades in contact. The Hungarians need to storm Nagysalló and two of the three objectives beyond it, while retaining control of another in their rear. These objectives represent the Hungarians' progress towards the besieged fortress and both sides' need to protect their own lines of communication.

In our game, the Hungarians' chances were soon holed below the waterline. Almost every Austrian shot on Turns 1 and 2 rolled the 10+ or 11+ needed for a kill (as opposed to merely disrupting), thus damaging or crippling all four of the initial Hungarian formations in short order.

However, the reinforcement rule came to the rescue and two further Hungarian infantry divisions were committed to battle, accompanied by their artillery and later followed by some cavalry. The Austrians likewise received reinforcements. The Hungarians renewed their repeated assaults on Nagysalló from both north and east. The Austrians' best brigades were spent, their cavalry was routed. But their formidable fortune with the dice continued, the Magyar assault was repelled, the Tyrolean Jaegers wiped out.

The Hungarians had failed to take a single objective. To add insult to injury, on the last turn an Austrian brigade that had arrived from the Hungarian flank raced up a road in march column to seize a village in the Hungarians' rear; a Hungarian battery was covering it and had a chance to rake the column, prevent it capturing the village, and preserve some dignity, but rolled snake eyes. That pretty much summed up the Hungarians' luck for the whole game.

Despite that, the whitewash 5-0 scoreline belied what had still been a tough and absorbing contest. It was not until the end of Turn 6 (out of 8) that it was clear the Hungarians would lose. Nick, who hadn't played this scenario before, said it was an excellent game even though he was on the losing side, and is keen to play it again. 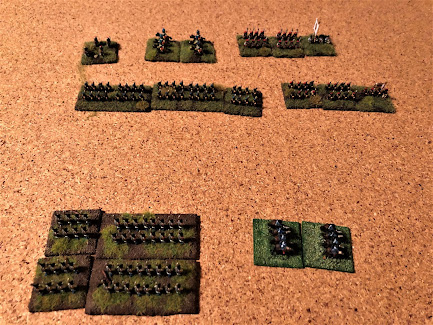 The butcher's bill: Austrian casualties in the foreground (most of Jablonowsky's division, plus the corps cavalry); Hungarian losses in the background rather heavier (half of Klapka's corps, most of Leiningen's, including the Polish Legion and the 'red kepis').

- As I've observed before, it is in the nature of small games with few units that extreme dice early on can have a disproportionate impact and skew the outcome, as it proved here;

- Variable reinforcements add unpredictability and excitement, which worked really well here (though see the previous point about the impact the dice can have);

- Rewarding possession of the key objective with improved reinforcement rolls is a nice mechanism;

- As Nick said, although the Austrians had outrageously kind dice, they still had to put their troops in the right place, and in this game they did just that with a sound plan, well executed;

- Before the game, the Hungarian plan of assaulting Nagysalló immediately on Turn 1 seemed the right one to me. With hindsight, an alternative approach could have been to use Turn 1 to manoeuvre around the village's open eastern flank in order to assault it from two directions on Turn 2 with better odds. The Hungarians might also have tried sending a brigade over the hills to threaten the Austrian rear. This is one of those games where there are several options and no obvious right answer - there are different possible routes to success, which is always good for replay value.

- The campaign is keeping everyone engaged. You'd think people might get tired of a constant diet of Hungary 1848 BBB with the same ruleset and the same armies every week, but so far not. I have offered to pause the campaign for a week or two, either so someone else can run something different, or even just to give everyone a break and a chance to return with renewed appetite, but no - the guys are up for more of the same next Monday. Time to fight the First Battle of Komarom!

If you've enjoyed this and you are interested in other resources related to this conflict or to BBB, I encourage you to visit:

- the BBB group on groups.io - this has masses of resources in the group files, especially scenarios.