In 1848, the largest fortress in Europe was Komárom (I believe). Its strategic significance came from its location at the confluence of two major rivers, the Váh and the Danube, between Vienna and Budapest. It therefore exerted a major influence on operations during the Hungarian War of Independence. Four large battles were fought outside its walls. Its garrison was the last Hungarian force to surrender.

Our Hungary 1848 campaign reached its halfway mark with the First Battle of Komárom (26 April 1849). Rather than recite the course of the game, I'll use this post to offer some more general observations.

In fact, we fought it three times this month. I had run the scenario a couple of times several years ago when I first wrote it. I therefore knew it was pretty solid, but it still needed more testing. First let me describe the general situation: 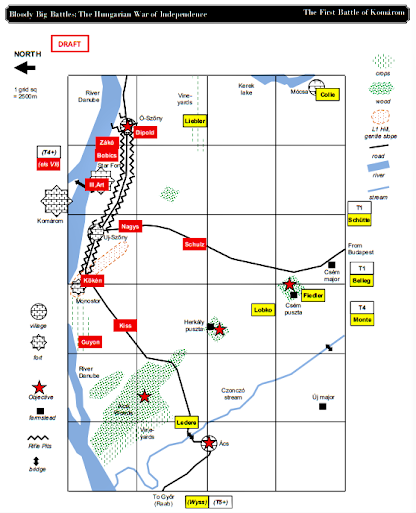 Scenario map for the First Battle of Komárom

The Hungarian army is breaking out of Komárom. The battle starts after the initial night assault that stormed the Austrian siege lines. It is now at the point where the Hungarians have reorganized and are ready to renew their attack. Meanwhile, the Austrian siege corps has received substantial reinforcements. There are five objectives at stake spread around the table. One is a wood in which huge quantities of Austrian supplies were parked. Two are manor farms that anchored the Austrian defensive line. Two village objectives represent the opposing sides' lines of communication.

1. The first playtest was with the core group of players that has fought the whole campaign so far. To avoid scenario-spoilers, I won't describe the plans or the action. In summary: the Hungarian attack inflicted such heavy losses on the Austrians that on Turn 6 the Austrian players were ready to concede. Yet the Hungarians ran out of time to take the now lightly-held objectives, and it ended up as an Austrian win. This provoked post-battle debate about scenario balance; whether it should be 9 turns long rather than 8; what part was played by luck or by good or bad plans. I should note that the Hungarians also suffered from a 'Campaign Consequence'. Having lost the previous battle, their best units were blunted by losing their 'Aggressive' rating. Anyway, it seemed clear that further playtesting would be helpful.

2. In the interlude between group gaming sessions, I ran a solo playtest. I omitted the 'Campaign Consequence'. I deliberately replicated the Austrian initial plan (though it later mutated) but implemented an alternative Hungarian plan. This was touch and go. On Turn 6, Austrian counterattacks had succeeded to the point that they held all five objectives. However, the Hungarians managed to retake all of them, including three on Turn 8, for an emphatic Hungarian victory.

3. For the third playtest I recruited different players. I was really pleased that both C-in-Cs voluntarily wrote full appreciations. These were thoughtful analyses of the situation together with their resulting plans. Furthermore, both sides' plans were different from those in either of the previous playtests. The result was an absolute ding-dong battle. Both armies marshalled their attacks really well. Three of the objectives changed hands no fewer than eight times - taken, retaken, re-retaken ... inevitably, although either side could have won it in the last turn, it resulted in a draw. This was fitting, as neither side deserved to lose. 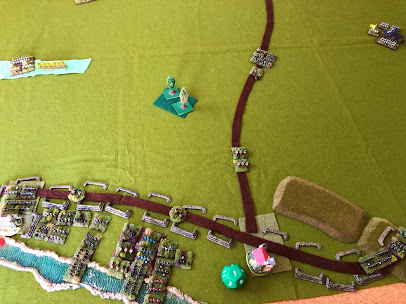 The Hungarian left starts massed in the captured Austrian trenches, ready to break out and complete the rout of the Austrian siege corps's thin white line. 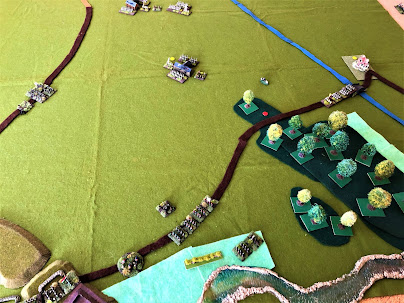 The Hungarian right about to collide with Austrians who have regrouped and are trying to retake the wood that holds all their ammunition, supplies, engineer equipment and tentage ...

From my point of view as ref and playtester, this third game was a thoroughly successful evening to cap a successful series of playtests:

A near-final draft of the scenario is available in the BBB groups.io files as usual.
Our next battle in the campaign will be another epic: Pered.
Posted by ChrisBBB at 13:27