In a previous post on Irish battles I reported on visiting some sites of military interest in the south of Ireland: Waterford, Kinsale, Baltimore, and especially Enniscorthy (Vinegar Hill).

This year I managed to tour the northern half of the island. Highlights were:
Siege of Londonderry (1689)
Battle of the Boyne (1690)
Battle of Aughrim (1691)
HMS Caroline (1914-vintage warship in Belfast)

I don't generally do boats nor anything pre-Napoleon, so I learned a lot.

Let's talk about HMS Caroline first. A C-class light cruiser built in 1914, this is the only surviving vessel to have fought in the battle of Jutland. As a museum she is really well done: piped background noises of what the crew, machinery etc would have been doing when she was in service added atmosphere, and the exhibits and displays were suitably interesting and informative. As well as being in action in WWI, she served as a static operations HQ in the fight against the U-Boats in WWII, and then as a naval reserve training base post-war. Our tour was enhanced by getting to talk with one of the museum volunteers, John, who had actually served on her post-WWII. If you happen to be in Belfast, well worth a visit.

Londonderry
Call me ignorant (you wouldn't be the first) but I simply hadn't appreciated the pivotal importance of Northern Ireland's second largest city in the island's troubled history. The key moment was in 1689 during the Williamite War in Ireland. To contest the English crown with William III, James II landed in Ireland where he had a lot of support; his forces overran almost all of the island except Derry and Enniskillen. Fearing a repeat of the 1641 massacres, Derry shut its gates to James and underwent an epic 105-day siege in which some sources say as many as 10,000 of the defenders and inhabitants perished before finally being relieved. The city walls are intact and impressive, and the Siege Museum is excellent. Murals and memorials on either side of the city outside the walls are sobering reminders that the scars are still raw. Consequently anything I write about this risks being contentious, so let me say here I have no partisan axe to grind and I don't mean to take sides. At least I now know a lot more than I did about both the Republican and the Unionist causes.

Battle of the Boyne
Now this I had heard of! It does qualify as a bloody big battle: about 35,000+ Williamites attacking 23,000 or so Jacobites. A feint outflanking maneuver drew off a large fraction of the Jacobite army before a Williamite frontal assault forded the river, resulting in a Jacobite defeat with losses of some 1,500, twice those of the Williamites. Of course it is in the area of linear warfare, about which I have expressed my view previously. Nevertheless, while I have reservations about how exciting it might be to wargame,* it's certainly colourful to read about. The battlefield has a fine visitor centre in an 18th-century stately home. An illuminated battlefield layout does a very good job of talking you through the course of the battle. (No miniatures, sadly, just red spotlighting for Williamite positions and blue for Jacobites.) Good displays of weaponry and especially artillery. Unfortunately we didn't have time to tour all of the battlefield. Some other time, perhaps. 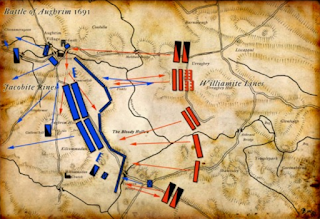 Battle of Aughrim
Remarkably, until planning this trip I was unaware of this, the bloodiest battle in Ireland's history. (I read a suggestion that it was the bloodiest in the British Isles, since the claims for medieval battle casualties were inflated; still, it is hard to believe that the Towton casualty list can be discounted from the commonly stated 28,000 or so to be lower than Aughrim's upper estimate of  maybe 9,000.) Coming a year after the Boyne, it is the result of William's decision to crush the Jacobite army in Ireland before further aid could come to it from France. Twenty thousand Williamites found themselves attacking an equivalent number of Jacobites in a strong position: on high ground with bog to the front, the left resting on Aughrim village and the right on a bridge. Initial Williamite assaults against the bridge and in the centre suffered bloody repulse; a subsequent assault in the north along a causeway into Aughrim might have had as little result, had a chance cannon shot not carried off the head of the Jacobites' French commander-in-chief, the Marquis de St Ruth, as he headed toward Aughrim to direct the defence there. The resulting confusion among the Jacobites enabled the Williamites to claw their way into Aughrim and then roll up the Jacobite line. This Jacobite defeat effectively ended the war.

The battlefield has a visitor centre, but unfortunately this closed for the winter as early as September. (Come on, Galway county council, keep it open a bit longer in future please!) However, the battlefield is well placarded at the key points, and I can highly recommend the app that will talk you through it. It was an easy route to drive around and we got a good sense of the scale of the battle and the nature of the ground.

Having seen Londonderry, the Boyne and Aughrim, then, will I start wargaming the Williamite War? You probably won't see me rushing out to buy Pendraken armies for the League of Augsburg any time soon; but at least next time I get roped into a Williamite wargame I'll have a better understanding of what I'm fighting for. And meanwhile, I've enjoyed good food and drink, good company and fine hospitality from the good people of Ireland (north and south). The sun even shone a few times when we needed it to!

*I have actually wargamed a Williamite battle with my mate Mike's armies. I do remember having to make one decision: whether to wait on my hill to be attacked, or to come down off it and attack with superior numbers before the enemy's flank march could arrive. I did the latter and lost. Can't recall which side I was playing though.