Last month I enthused about our Trautenau game from the Austro-Prussian War. This week we fought the sequel, Soor (also known as Burkersdorf).

Soor was one of the battles fought along the Bohemian border in 1866. At Trautenau, the Austrian X Corps under Gablenz had repelled the Prussian 1st Corps. The next day, Gablenz discovered the Prussian Guard Corps had crossed the border further south and was threatening to outflank his right and cut off his line of retreat. A running battle developed as the Austrians tried to escape to the southwest through Soor. X Corps got away but was badly mauled, losing over 6,000 men vs about 1,000 Prussian casualties.

Our game therefore revolved around how many Austrian units could retreat off the designated exit. Or I should say, exits (plural), as there was about 75% chance that a second exit road would become available to them during the game. This was one possible result from a random events table which was rolled on every Prussian turn. The other possibilities included early release of the Austrian rear guard; arrival of help from Austrian IV Corps on the southern flank; Prussians stalled for a turn because of commanders' uncertainty; or a random Austrian unit obliged to halt or assault. 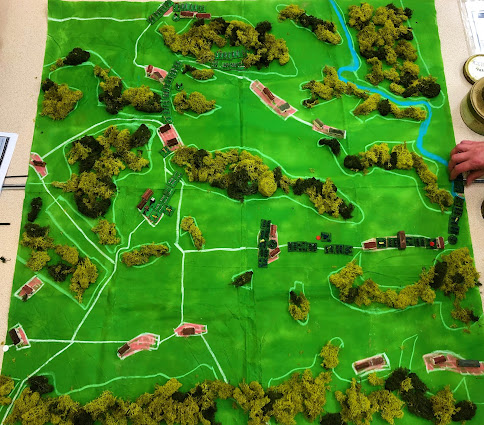 The whole battlefield fitted on 4'x4', on a larger ground scale than Trautenau. Last month's Trautenau scenario on 6'x4' was fought on roughly the upper left quarter of this map. The Austrian columns snake south from Trautenau (just out of shot, top centre) to Burkersdorf (middle left); they have to escape via the white counter at Soor, lower left table edge. Alternative exit may open at Altenbuch (centre of left edge). Prussians are queuing up from the east to march through Staudenz and cut off the Austrians' retreat. 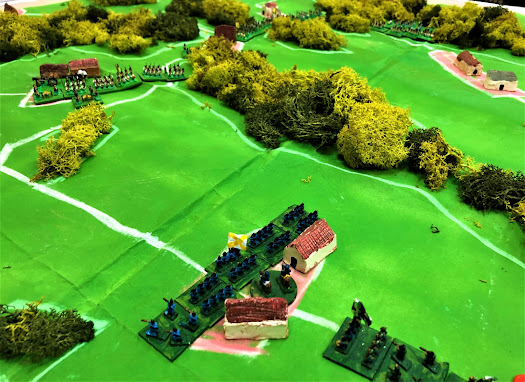 The Prussian advance guard starts in Staudenz. Knebel's depleted brigade and the Austrian corps artillery await the Prussians at Burkersdorf. Austrian baggage wagons can be seen in Burkersdorf. 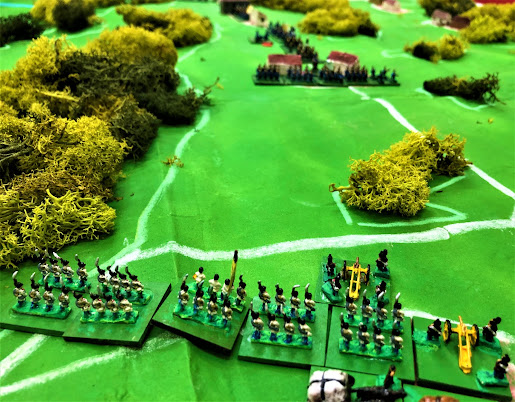 The thin white line! The same situation seen from Knebel's point of view. Those guns did a good job. 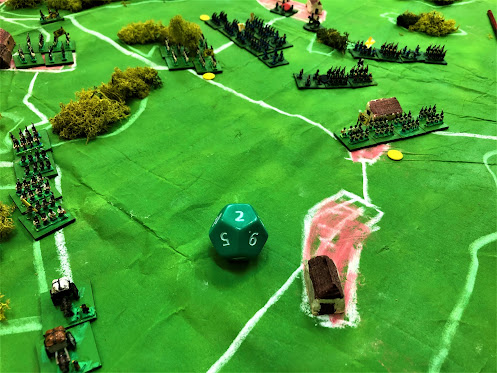 We Austrians benefited from some crucial dice in the first two turns. First, our fire halted the Prussian advance guard on Turn 1, meaning all the units marching down the road in column behind it were halted for a turn as well. Then at the start of Prussian Turn 2, the random events table sent us aid in the form of part of Brigade Fleischhacker of IV Corps materialising in Kaile behind the Prussian flank. 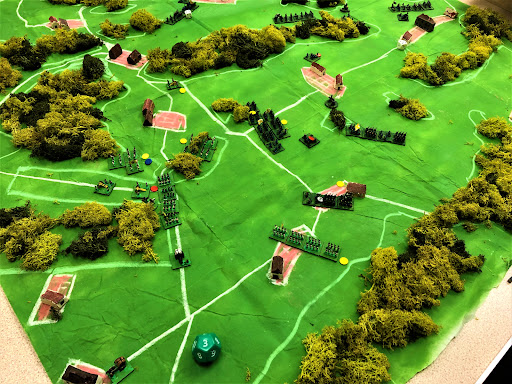 Consequently, after Prussian Turn 3, although we had suffered some casualties (one regiment with a blue Spent counter, several with yellow for Disruption), both our baggage units were well on their way to the exit, with an infantry regiment and a couple of artillery units destined to follow. That would provide 5 against our target of 7 units exited for a draw or 8 to win. But where would the others come from? Four infantry regiments are still stranded out of sight above the top left of picture, with Prussians racing forward from the right to intercept them. 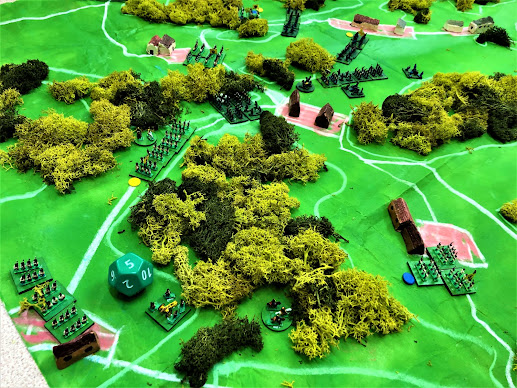 Once again, the random events table came to our rescue. This is the situation at the start of Austrian Turn 5. Two of the Austrian rearguard regiments and some guns have evaded the Prussian interception force and reached the vicinity of Altenbuch on the west edge of the table, with Gablenz in the woods nearby to motivate them. At exactly this perfect moment, the random roll opened up an alternative exit for us at Altenbuch, and all three units duly made their movement rolls to escape. The pursuing Prussians' needleguns mowed down our rear ranks, but not enough to stop us exiting our 8 units. Hurrah - another pyrrhic Austrian victory!

This all happened so quickly that we were able to reset and play through the whole game again. The second game was very different: the Prussians did a better job of closing off the primary exit early, so we only got three units off there; the second exit never opened up at all; Austrian Stosstaktik failed to break through the Prussian needleguns; we were quite thoroughly trapped and wiped out.

Random events tables are fun but, well, random. The random roll each turn did inject unpredictability and therefore excitement, which is good. On the other hand, the two games' very different outcomes were affected quite strongly by the random events, perhaps more than by players' plans. That's OK sometimes - I've used random events tables a few times before, eg for Coulmiers (Franco-Prussian War) - and it was certainly good value on this occasion. But you wouldn't want every game to be like that.

Fighting withdrawals make for good games. This was demonstrated by last month's Vác (1849) game too. At Soor, essentially you have two columns colliding at right angles, which is nice geometry for producing lots of manoeuvre and tactical choices for both sides.

Stosstaktik vs Needlegun - give me that asymmmetry. In our Trautenau game, the needleguns were outranged and defeated. Here at Soor, those Prussian breechloaders were devastating.

Four players plus an umpire is a very good formula. Crispin laid on the game for us, arbitrated as required, and policed the scenario special rules etc. Two of us on each side meant we all had enough to do, we could play in parallel (Mark vs Dave on our left, me vs John on our right) and get through the turns quickly.

Playtesting: the two radically different results did make us review and revise the victory conditions a bit. Even so, for an untested scenario, it gave us two damn fine games and needed very little tweaking. The untweaked version is one of the 100 or so freely available from the BBB groups.io files. (Go on, join the group - it's easy, no hassle, and >900 members can't be wrong.)

How fast and exciting was that! OK, so the first game was cut a bit short as the Austrians escaped on Turn 5 (out of 8). But we fought the second game to the bitter end. That's 13 turns of action, plus resetting the battlefield between games, yet the two games combined took just two and a quarter hours. It was intense!