What a great start to the New Wargaming Year! Bob, who I hadn't seen in person since the era BC (Before Covid), lured me over to his place for the day. I was expecting one of his fine tank battles - he'd mentioned the idea of a what-if 1969 Sino-Soviet clash - but he had a yen for BBB and liked the look of the next Hungary 1848 scenario in my queue for playtesting. Consequently, we fought the Second Battle of Vác - the twelfth in my series of scenarios for the Hungarian War of Independence - and my beautiful professionally-painted troops got to march across his equally gorgeous terrain instead of my functional felt for a change.

This scenario got an initial playtest two and a half years ago. My post about that game gives the detailed historical background and game situation, so I won't repeat that in full here. In brief summary only: Hungarian and Russian advance guards clash and jockey for position; both sides deploy more troops overnight; the outnumbered Hungarians then decide to withdraw, so they have to hold various objectives for different lengths of time, while getting half their force off the table. The previous playtest had left me with the feeling that the scenario might benefit from being a turn or two longer, so we made it a 12-turn game. Bob took the Hungarian side as it presents the most unusual and interesting challenge (not that the Russians have it easy, but the decisions they have to make are more conventional ones).

What follows is a relatively detailed AAR with over 20 photos to do Bob's table justice. If that's too long for you, skip to the end for a summary and reflections if you're still interested in those. 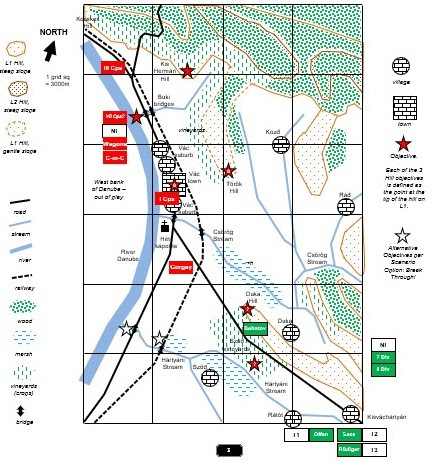 The scenario map to help you get oriented. Russians in green approach from bottom right. Hungarian march column has arrived from top left. Red stars mark objectives. Advance guards will contest the southernmost two initially, then the Hungarians have to hold the middle two at end of turn 8 and the northern two at game end (turn 12). Hungarians need 4 objectives for a draw, 5+ for a win. They also have to withdraw a corps-worth of troops; they lose 1 objective if they fall 1 unit short, 2 objectives if they miss by any more. 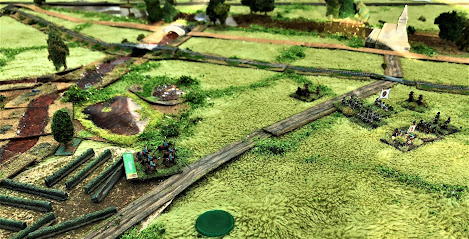 Hungarian advance guard (right of picture) about to drive Bebutov's Caucasus cavalry out of the Sződ vineyards. The game kicked off with a bang as Bob expelled them from both the forward objectives on Turn 1. To do so, he launched his own lead hussar brigade out of Vác in a bold charge which resulted in our cavalry's mutual destruction. This left him with just one cavalry brigade, which would have consequences later. 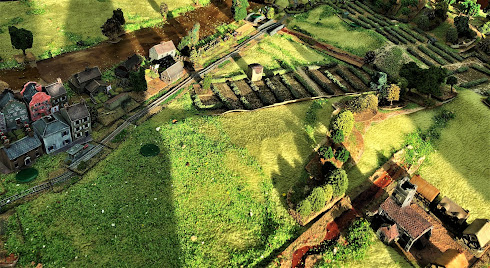 Under the midday sun (shining from the north, but never mind), two Hungarian corps follow their advance guard in a long column marching alongside the Danube from top right of picture into the charming riverside town of Vác (left of picture). 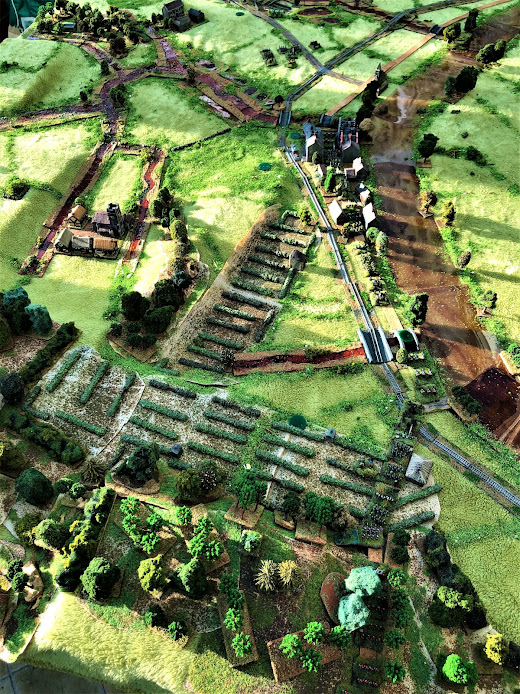 View of the whole battlefield, looking from the tail of the Hungarian march column (bottom right), following the column as it marches south between the Danube and the railway into Vác. The Hungarian advance guard is visible on the plain beyond Vác, opposed by one tiny Russian cavalry unit. 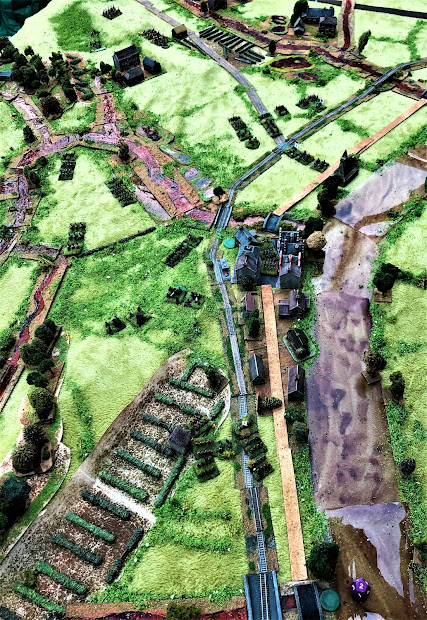 Hungarian Turn 2. The Russians have appeared in more force - three cavalry brigades and their artillery, top left of picture. The Hungarian advance guard has therefore fallen back from the vineyards to join the main body debouching from Vác and form a line. 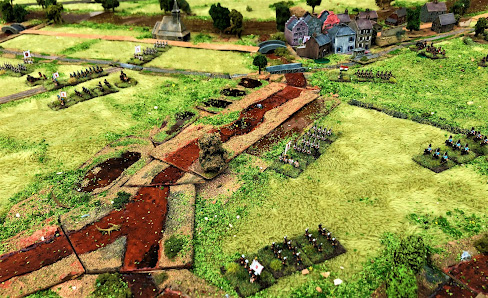 Close-up of Bobics's division on the Hungarian left; Hungarian right wing is in the distance (top left of picture). In the Night Interval, both sides will redeploy: Hungarians first, south of the Csörög (the stream in centre of picture) and around the Hétkápolna (the church top left), >6" from the Russians; then the Russians, north of the Csörög and >6" from the Hungarians. Bob is therefore trying to establish a line to keep my Russians beyond the Csörög so we don't constrict his redeployment and are ourselves forced to deploy at a distance from the next objectives. 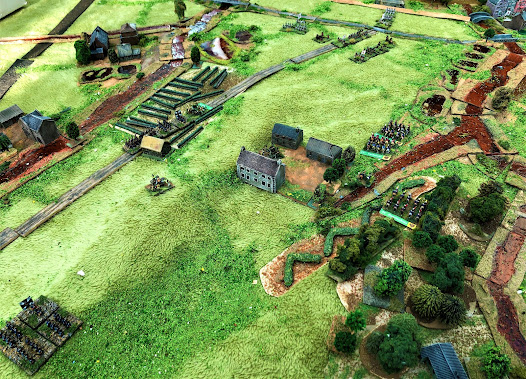 Same situation as the previous photo, but looking towards the Hungarian right wing from behind the Russians, who have straggled somewhat on arrival. Some infantry and guns are in the vineyards, cavalry probing right towards the Csörög, and more infantry bringing up the rear. 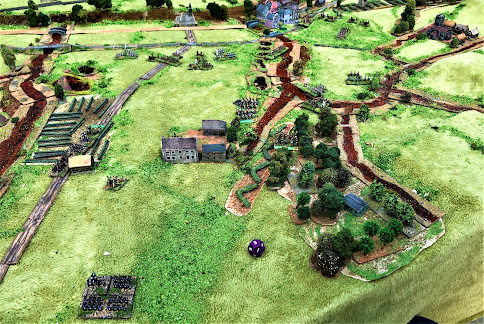 Hungarian Turn 3. Their march columns have changed into battle formation. Bobics has crossed the Csörög, daring the Russian cavalry to attack him. 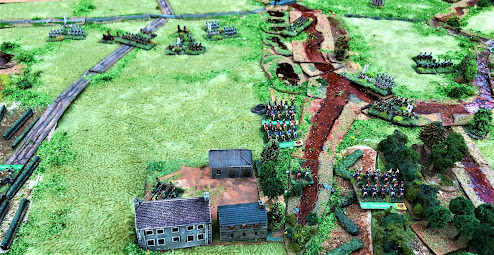 A closer view of the confrontation above. 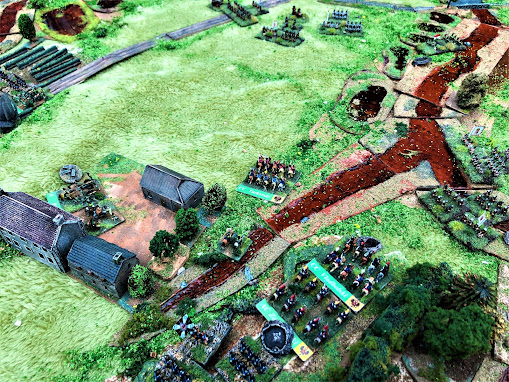 Russian Turn 3: the shell craters indicate that the Russian hussars and lancers have retired Disrupted after their charge failed to drive back Bobics's men. Some consolation in the form of the empty ammo boxes by the battery in Duka village, showing that the guns are low on ammo after causing a Hungarian casualty - though, as it turned out, this was then recovered overnight anyway.

Turn 4 (the last before nightfall): satisfied with having kept my cavalry at bay, the Hungarian left falls back behind the Csörög. On the Russian turn, the cavalry fail to rally. 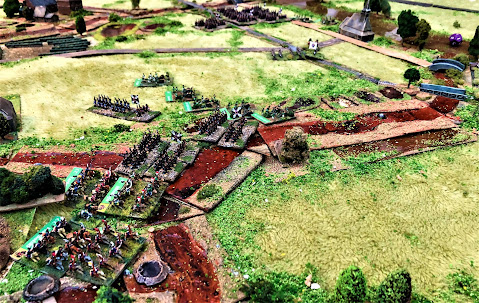 Russian forces lining the Csörög after their Night Interval redeployment. The cavalry in the foreground still have not recovered their composure. A massive gun line in the centre aims right towards Vác. Beyond the guns, a solitary Hungarian rearguard brigade is visible, about to skedaddle (and be blown away). Beyond it, the bulk of the Russian infantry and a few more guns poised to attack Vác.

And a view of the Hungarians braced for the impending Russian assault. Front centre are General Leiningen and his best troops: the Polish Legion in their red czapkas, and a brigade including the famous 9th Honvéd Bn in their red kepis. Behind them, a formidable gun line defends the Török Hill objective. In the far distance, a third line holds the final rearguard positions. 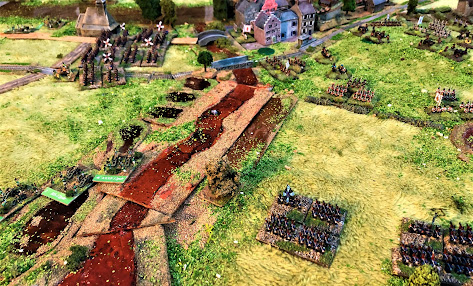 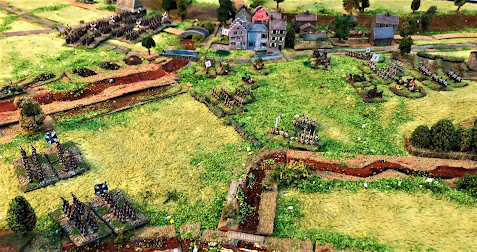 Another view of Turn 5. The Russian cavalry are supposed to be on a sweeping move to outflank the Hungarian left, but it doesn't seem to be happening ... 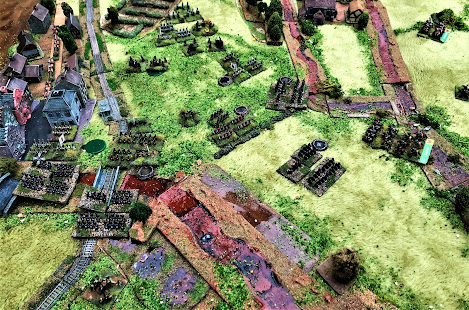 Turn 6: Russians close right up to Vác , crossing the river in front of the town, but do not assault yet. Meanwhile, shell craters show where Russian attacks on the Polish Legion and the red kepis have been inconclusive and left everyone Disrupted. 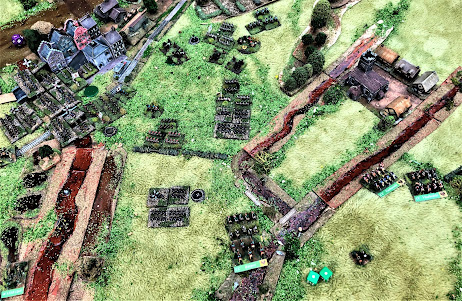 Turn 7: crunch time! Attacks go in on Vác and the Polish Legion. The Russian cavalry (front centre and bottom right) has begun its sluggish outflanking move - those snake-eye dice betray a series of dreadful movement rolls. 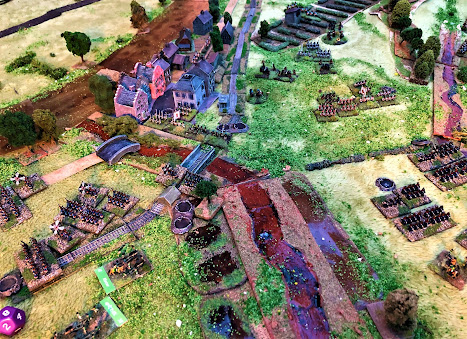 Turn 8: After the crunch, the thud. All the Russian attacks bounced off. The twin craters and tent mark a Russian brigade that is decimated and spent. The Hungarians reform their line in the centre. General Görgei can be seen at the back, directing the imminent withdrawal. At the very top centre, Hungarian hussars depart. Bob was about to launch them against my Russian cavalry when he realised that he was required to exit one cavalry unit or forfeit a victory point. As he had got his other cavalry unit killed on Turn 1, the hussars had to leave the party early!

Turn 9: The Hungarians have successfully held both middle objectives to the end of Turn 8 and begun to withdraw their gun line. The Russian cavalry finally gets into gear and dashes through the woods to cut off the Hungarian retreat, forcing the guns to evade onto the road (which they wanted to do anyway). The Russian infantry has no subtle options so keeps pounding the Hungarian rear guard. 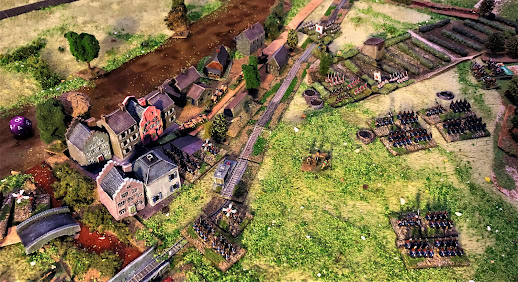 Turn 10. Vác and the Török Hill have fallen at last. Russian columns press on after the battered Hungarian defenders. The Russian cavalry, though, has been balked by enfilading fire from a Hungarian battery on the commanding Kis Hermán Hill position at the rear (out of shot, upper right). 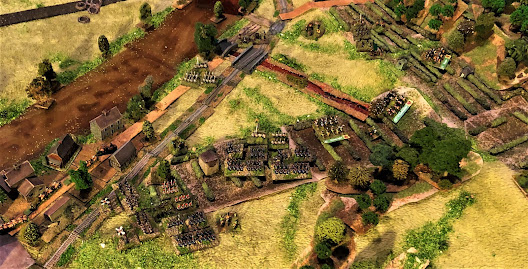 Turn 11. The end is nigh. Two Hungarian units in the vineyard are being overwhelmed by five Russian brigades. Russian cavalry menaces the battery defending the Kis Hermán Hill objective (upper right). A column of Hungarian infantry is about to desert the guns as Bob tries to reach his quota of troops withdrawn off the table. 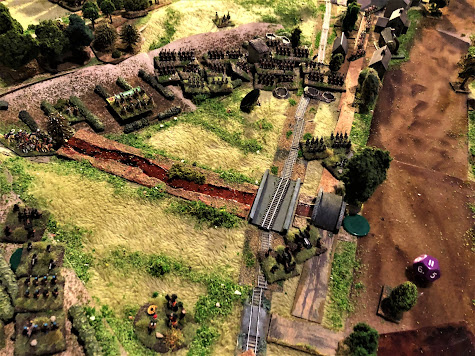 Turn 11 seen from General Görgei's viewpoint (front of pic). The Polish Legion has succumbed but the other Hungarian infantry in the vineyard will live to fight another turn. Hungarian guns defend the Buki bridges objective. 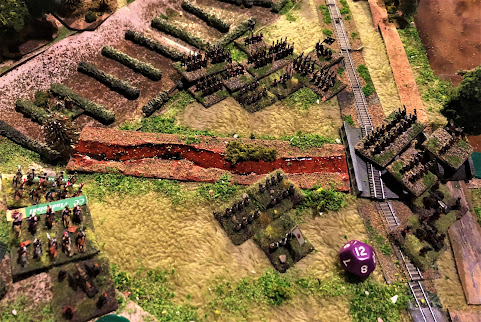 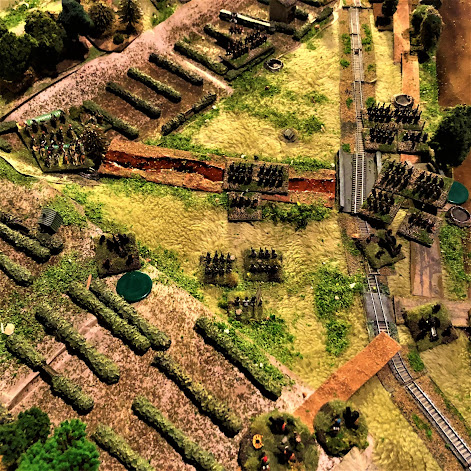 Game end. The Russian infantry have carried the bridge, but the guns on the hill repulsed the Russian cavalry. Thus the Hungarians have held 5 out of the 6 objectives. That would be enough for victory, except that they have fallen one infantry unit short of the number they were supposed to withdraw off the board. Thus their VPs are reduced from 5 to 4 and the match is drawn!
Summary
Bob made sure of the first two objectives on Day 1, but it unluckily cost him a precious cavalry unit.
He succeeded in forcing me to deploy at a distance for Day 2. Maybe he was lucky with my poor movement rolls for my cavalry, and none of the critical combats went against him, but on the other hand his artillery's dice were dreadful. The luck probably evened out, and his plan was sound enough for him to hold the second pair of objectives to the end of Turn 8.
The final third of the game was a frantic scramble, as fighting retreats often are. Bob had to strike a balance between withdrawing enough troops to meet the victory conditions and keeping enough on table long enough to hold the final pair of objectives. He almost managed it, falling just one infantry brigade short of the withdrawal target, and barely losing the Buki bridge objective in the last combat of the game, so had to be satisfied with a draw.
Reflections
Beautiful terrain is such an important part of the High Quality Gaming Experience. I really ought to make the effort to upgrade my own terrain collection.
The first rule is always to understand the victory conditions. In an unusual scenario like this one, it was especially important. Bob approached it with due care and attention, quizzing me to make sure he understood his victory conditions correctly, as well as the very significant redeployment conditions in the Night Interval.
Fighting withdrawals make for good games. Particularly for the defender, the choices about which troops to pull back and when, and where to stand and fight, present interesting challenges.
Fighting withdrawals are tricky to set victory conditions for, because of that 3-dimensional trade-off between space, time and forces. I'm happy that the scenario produced such a good close game and a tight finish (all three results possible on the last turn - classic BBB).
The luxury of time: on a Monday night at the club, time is at a premium and there is generally pressure to make decisions quickly and get on with it. For this battle we had all day and were able to approach it in a more leisurely manner. Critical decisions could be mulled over at length; we could take a step back between turns to take photos and appreciate the battle situation; we could pause for pizza ...
6mm figures make it easy to use proxies. My whole Hungarian army is built from proxies, of course - mostly ACW infantry in kepis - but at least they are painted the right colour. But you may or may not have noticed that those Russians in the photos, in their correct 1849-era spiked helmets, are wearing blue rather than green ... that's right, I don't have a Russian army for the '48, so my Prussian infantry (and Bob's Napoleonic Russian cavalry and artillery) did the job.
So good to catch up with an old friend in person after so long. A great way to start the New Wargaming Year!
PS - a reminder that, for anyone interested in this conflict, my book Hungary 1848: The Winter Campaign is available from Helion. The sequel, Hungary 1849: The Summer Campaign, is in press and should be published this year.
Posted by ChrisBBB at 09:01