Mars-la-Tour is rightly one of the most famous battles of the Franco-Prussian War. The main French army was trying to retreat to avoid being enveloped and trapped in its fortress at Metz. It was intercepted by a much smaller but far more aggressive force, the lead elements of the German II. Armee. The French attempt to break through failed and they fell back towards Metz. This was followed by another French defeat at Gravelotte two days later, after which the French army was truly bottled up and besieged in Metz. Nearly 200,000 men surrendered two months later.

This is one of the nine FPW scenarios in the BBB rulebook, so it is a very familiar battle to our gang, but it's been a while. We last visited it five years ago, soon after Crispin ran it as one of the showpiece games at BBB Bash Day in 2017. I said on that occasion, "Wargames really don't come more exciting than that" - but this revisit proved me wrong! 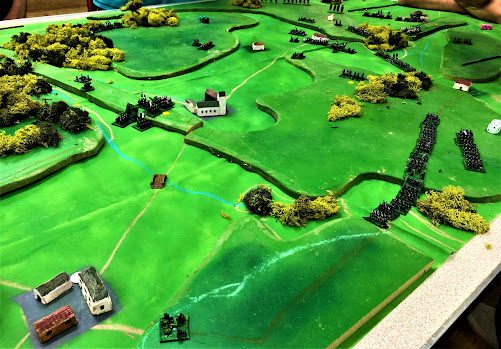 The battle revolves around the French army's effort to march from Gravelotte (bottom left of pic) through Mars-la-Tour (top right), while Germans keep marching on from the upper left to stop them. This pic shows the situation after a couple of turns. Our French plan was to hurl everything towards MLT as fast as we can, leaving only the Imperial Guard grenadiers to hold Rezonville (centre of pic) until reinforcements arrived. Unfortunately they were overwhelmed by aggressive Germans ...

A couple of turns later and the battle has taken a more conventional shape. Blue lines show the French front, red for the Germans. Rezonville has been retaken and the German attackers there wiped out, Vionville has been captured, and a corps is deploying around MLT (more troops out of shot right of pic). It looks bad for the outnumbered Germans, but more are about to arrive. In particular, note the red arrow top left. Another German division will debouch from there ...

... and will storm into Rezonville! The French division holding it rolled snake eyes and fell back in disorder (out of view), refusing to charge back in on the final turn. Another division right of pic, low on ammo, likewise declines. The Imperial Guard voltigeurs, left of pic, are pinned down by German artillery. Only the chasseurs a cheval will charge in from the right. Can the Germans hang on? 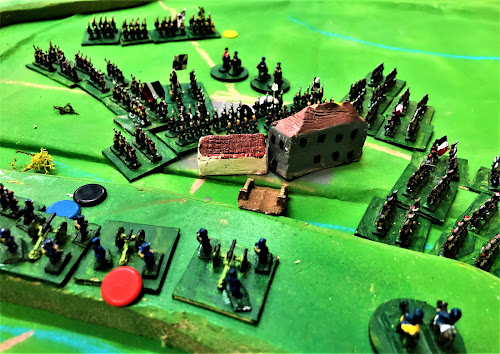 Meanwhile, also on the last turn, three French divisions mount a massed assault on MLT. French artillery provides fire support as they go in. The assault succeeds! The Prussians are in no shape to counterattack. An attempted Prussian counterattack against Vionville also fails, so they can no longer win. Still, if they hold Rezonville, they can claim a draw ... 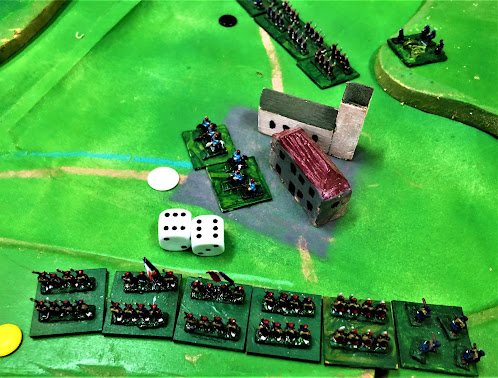 ... but with the final shot of the game, I roll 12. The German brigade in Rezonville evaporates, my cavalry canters in, and victory is ours!
This really was a super-exciting dramatic finish to a see-saw game. Rezonville changed hands four times. French passivity and lack of competent generals made it a race against the clock to reach and take MLT. On the final turn, three of the four objectives were contested; all three results were possible, it was still a German victory when the turn began, but the French took and held enough to snatch a win.
Reflections
This scenario format - a fixed number of turns with victory being decided on objectives held, and the possible results being Win/Draw/Lose - so often makes for exciting finishes. This one was breathtakingly so. It's definitely better than a binary Win/Lose, and I think it's better than incremental casualty-counting or army break-points too. (Per my Reflection on victory conditions.)
Replay value is something I reflected on a few weeks ago. From bitter experience, I had some idea what we on the French side needed to do to give ourselves a chance. As it happened, our plan worked. Now I'd like to play it yet again, this time as the Germans, to see how to defeat that 'optimal' French plan ...
The march of technology: the previous few weeks had seen the Prussian needlegun dominating Austrian opponents in 1866 games. Mars-la-Tour pitted the needlegun against the chassepot and showed vividly how the game changes when the technology changes - some players particularly enjoyed seeing the Prussian infantry having to take it instead of dishing it out.
The dice can tell a story. In this scenario the French command and control is heavily handicapped, so our units frequently failed to move. Often we were able to rationalise this by saying, 'oh, Bazaine is over there loading a gun instead of issuing orders', or, 'oh, they've seen that Prussian division appear on their left', or 'oh, doctrine dictates they'll settle down into a firing line rather than pressing forward'. On the German side it would be, 'I don't like the sound of this Death Ride ...'
It's such a pleasure just to turn up and play. There have been times where if I wanted a game I had to run it. These days at OWS I am spoiled: we have people keen to umpire, keen to write scenarios and run them, keen to get their terrain and armies on the table. All I have to do is arrive and be entertained. Brilliant!