I took advantage of a week's holiday in Brittany to explore several centuries' worth of fortifications and museums. (See also my previous military museum raid on Brittany to St Cyr.) Most of this reconnaissance was done during day's tour of the Crozon peninsula along the Route des Fortifications. The Crozon tourism office provides a nice downloadable brochure here.

Captioned photos below give the details. In summary:

(The photos are grouped by site rather than in any special chronological or geographical order, so if you're interested in one conflict or site in particular, sorry but you'll just have to search/scroll.)

Spanish Point commands the approaches to Brest. The placard below tells the story. In 1594 the Spanish landed; 400 of them fortified the place and defended it for a month against the Huguenots and their English allies. Subsequent centuries saw layers of batteries and fortifications added. 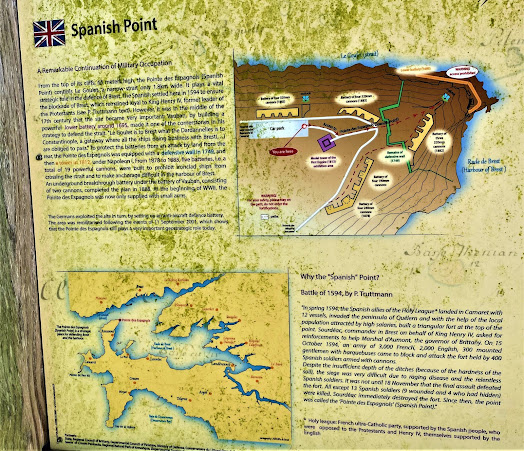 This massive piece of ordnance is a 32cm gun that was deployed here in the 1880s. During WWI it was used as a railway gun at the Somme. It fired so much, it wore out its rifling and was rebored to 34cm calibre!

Morgat is the small port of Crozon on the south coast of the peninsula. In the mid-C19 a system of fortifications was built to defend it, including the upper and lower Kador batteries. 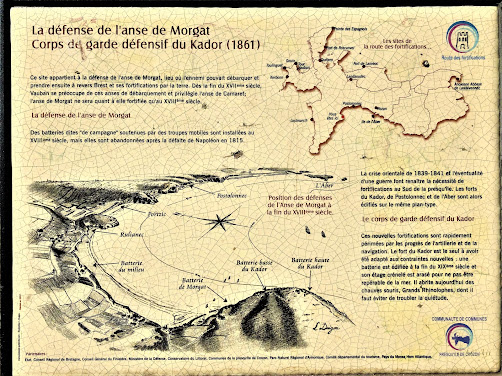 The upper battery actually dates back to the Seven Years War: a simple U-shaped mortar position supported by a garrison hut and powder magazine. 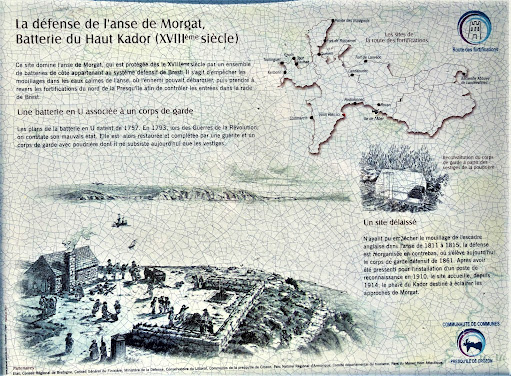 The battery (left of pic) - not much left to see! 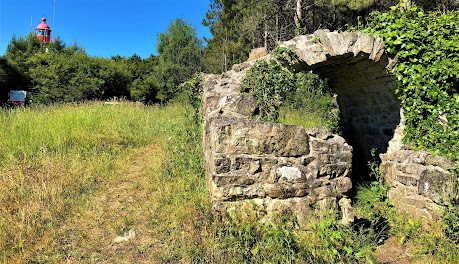 ... and so is this substantial casemate behind its earthen ramparts at the lower battery. This fortification now protects a bat colony. 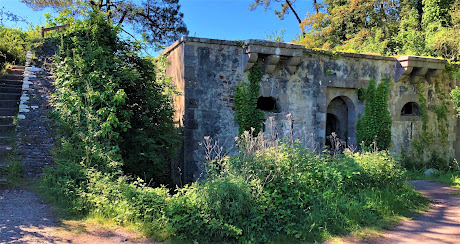 Battle of the Atlantic museum
On the west coast of the peninsula is a set of German bunkers. These were built on top of C19 mortar battery positions to house a coastal defence battery in WWII. Nowadays, one of them is home to the excellent Musée Mémorial Bataille Atlantique. 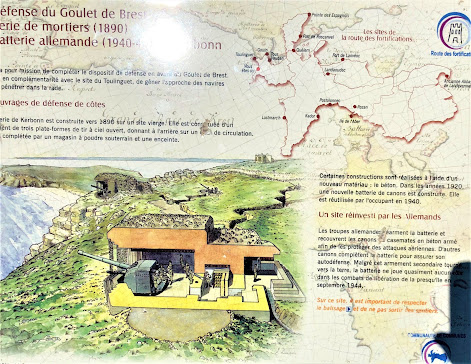 The museum is approached via an avenue lined with anchors, mostly from French warships. These massive things are three times as tall as me. And it's not that I'm short.

The museum is also guarded by a sea mine and an 88mm off a U-Boat. (Not a very successful one - five missions, 64 days' sailing, no kills, captured in a French port, if I remember right.) The museum is absolutely packed with such treasures. 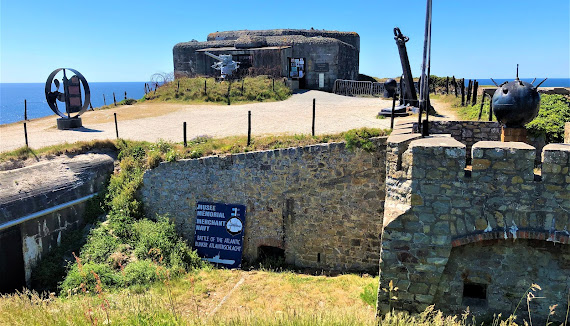 Stonework betrays the C19 ancestry of the position.

Fort de la Fraternité
On the west coast while heading up to Pointe des Espagnols we found this small fort complex. Originally built in 1793, then updated mid-C19, then taken over and added to by the Germans (of course) in WWII. The hyperlinked source explains better than I can.
The main fort has an extensive loopholed curtain wall (left of pic) and a central powder magazine (right of pic).

It is on the north shore of a cove. Looking south across the cove you can see the German bunker at the point, and a well protected building centre of pic. Incidentally, these sported some better-quality graffiti than the usual - quite artistic, in fact.

Tour du Toulinguet
Toulinguet is the westernmost tip of the Crozon peninsula. Consequently for Vauban to install a battery, then more added in Napoleonic times, plus an enceinte and tower to protect the landward side; then further batteries in the late C19. A naval surveillance station still operates from the site, hence no entry past the enceinte wall.. 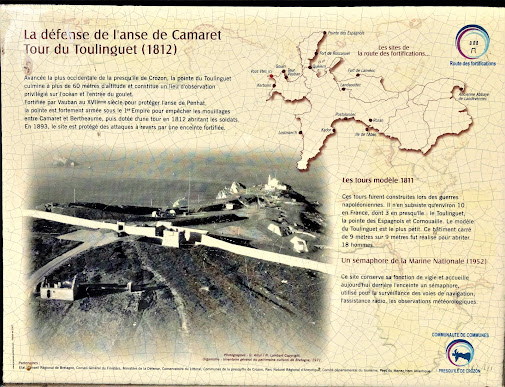 The tower is outside the enceinte. This held 18 men. 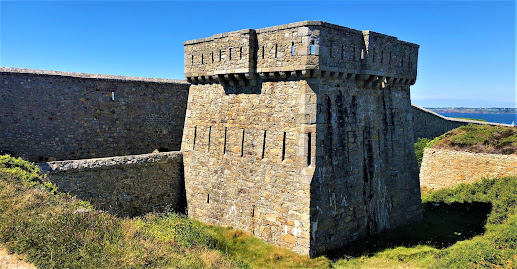 Tour Vauban, Camaret
The charming seaside town of Camaret boasts this fine tower and battery constructed by Vauban. It has a museum inside but time did not permit so I can't report on it. A pity, as apparently there was a serious battle here in 1694 with Vauban himself present. But I can report that Camaret has plenty of nice waterside bars and restaurants to refresh a thirsty student of military history. 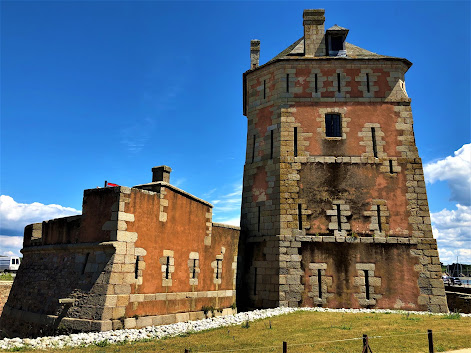 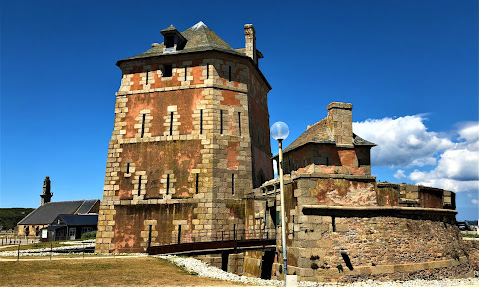 Phare d'Eckmühl (Penmarc'h Lighthouse)
At the southwest corner of Brittany, near Penmarc'h, is the Eckmühl lighthouse - so called because it was built with funds donated by Marshal Davout's daughter to commemorate his exploits at the eponymous battle in 1809 which earned him the title of Prince of Eckmühl. 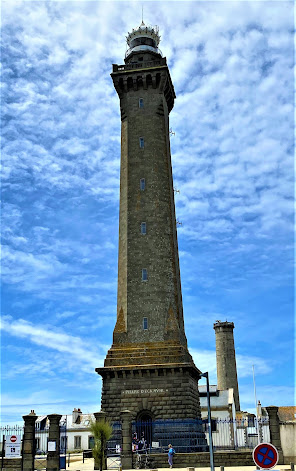 The Phare is just one of a series of four towers along the point. Two of the other three were previous lighthouses, superseded as taller lights were required. As at Toulinguet, the white tower at the end is still an active naval surveillance station. 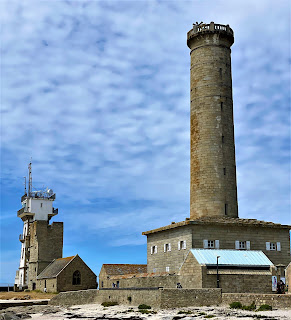 Lorient U-Boat Base
A trip to Brittany would not have been complete without visiting the massive U-Boat pens at Lorient on the south coast. Three huge concrete bunkers had 17 docks in all and an elaborate lift and carriage mechanism to move subs between them.
K1 was closed on the day of our visit; K3 only visitable by guided tour in French; my French is OK but an hour and a half would have been too arduous; so we just went to the K2 exhibit about submarines in general. 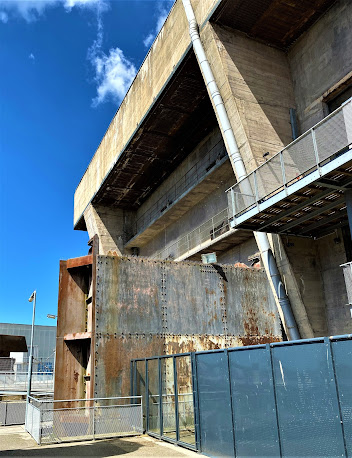 That did include a tour of a 1950s French sub, the Flore. Sufficient to confirm that submariner would not have been an ideal job for me. 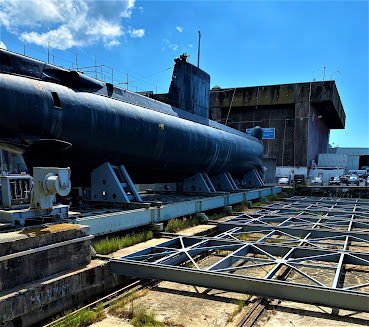 Didn't make it to Brest but here is a view of the Brest U-Boat pens across the water from Pointe des Espagnols:

Musée Vendée Chouannerie
(Saving the best until last - this one's for you, Vincent!) The Musée des Guerres de l'Ouest (as it also calls itself) is in a former hospital bunker, part of a large complex built by the Germans to defend Quiberon Bay. The museum is devoted to the Breton Chouannerie (a series of uprisings from 1794 to 1832) and the War in the Vendée (1793-1796).
The bunker complex: 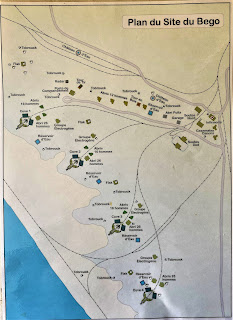 I had not appreciated the scale of these conflicts. A map in the museum shows the locations of some 30 battles or significant skirmishes; the Vendéan army fielded 10s of 1000s of men; and well over 100,000 Vendéans died either in action, or of disease or hardship, or in Republican reprisals. Feelings can still run high today: while we were in the museum shop, one of the museum staff was in a heated argument with another visitor. It ran something like this: "The Vendéans were counterrevolutionaries - they had it coming." "What, the women and children burned to death in a church had it coming?" A grim business. As they say, war doesn't decide who's right, only who's left.
A French Revolutionary hussard de la mort - 'Death Hussar' 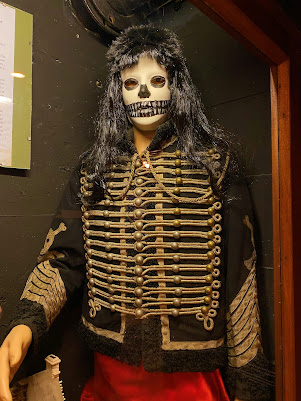 A distinctive feature of the museum is its rank upon rank of charmingly characterful model soldiers. Here we have some of the Republican forces sent to suppress the uprising. 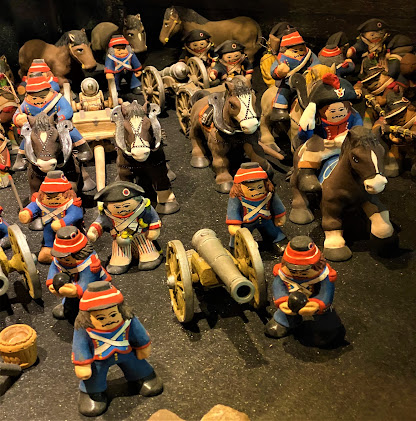 Not so charming: Republicans pacifying a Vendéan village. 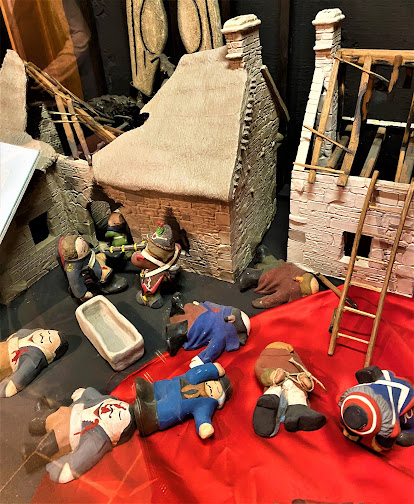 Towards the end, the Vendéan army tried to escape pursuit by crossing the Loire, as depicted in the painting and diorama below: 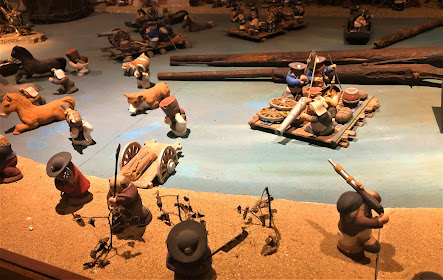 The museum had far more than these pictures can do justice to, and more than we could absorb in a short hour's visit. Paintings, uniforms, documents, weapons, artifacts ... I came away armed with a book to learn a bit more about it all. Recommended!
Posted by ChrisBBB at 22:16