As most wargamers and readers of this blog probably know, Dresden (1813) was one of the biggest battles of the Napoleonic Wars, with over 300,000 men engaged. This makes it a must-do for any serious grognard. Mark Smith duly obliged and ran a game of his BBB Dresden scenario for us.

Just as the historical battle was fought over two days, so was ours. In our case it was two remote sessions on successive weeks. Consequently the French command changed at half-time, with Colin taking over from Crispin as Napoleon to fend off the allies commanded by me and Graham.

It's very much a battle of two halves. On Day 1, the French are outnumbered but have all their best troops on the pitch - including the entire Imperial Guard - with which to prevent the Austrians, Russians and Prussians gaining a foothold in the suburbs around Dresden. On Day 2, both sides are reinforced, but the allies gain guards and grenadiers to stiffen them against the French counterattack. 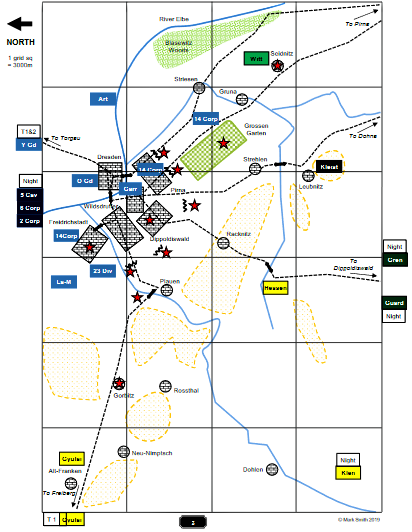 Scenario map. Red stars indicate victory locations. NB - the redoubts only matter on Day 1. Inevitably there will be tough fighting around the city, but there is also room for manoeuvre on both flanks.
The scenario design puts pressure on the allies to attack initially, rewarding them with 1 or 2 Victory Points if they manage to hold 1 or 2 of the redoubts at the end of Day 1. Graham and I calculated that attacking offered other advantages too: once in the Gross Garten or the suburbs, our troops would benefit from cover; and compressing the French front line would make it hard for the enemy to use all his combat power.
We therefore launched multiple serious attacks: against Friedrichstadt in the northwest, against the Gross Garten in the south, and against the three redoubts between them. After a couple of turns of attack, counter-attack, and counter-counter-attack, we had got into but not gained control of the Garten and the 'stadt; all three redoubts had changed hands, but we only held onto one of them. Still, at least that was one VP in the bank that could not be taken away from us.

Webcam view late on Day 1. Plenty of fog of war! Looking south from behind Dresden. The rectangular hedge left centre is the Gross Garten, with both sides' troops contesting it. Austrians and Prussians line the ridge in the distance; blue 'Spent' markers are the legacy of the Old Guard retaking a redoubt from Kleist's Prussians. Masses of French hold Dresden. Their high quality is shown by the green cubes ('Aggressive') and purple counters ('Shock' cavalry).

For Day 2, Colin inherited something of a traffic jam, with the French army virtually all in the semi-circle of Dresden and its suburbs. On the French right there was some space to breathe and a chance for Marmont to break out and threaten the objectives behind the Allied left wing. Unfortunately for him, stalwart Austrian defence and some lamentable French movement rolls meant Marmont never managed to eject Gyulai from Friedrichstadt. This in turn impeded French efforts to attack in the centre towards the bridge at Plauen and caused losses in precious French cavalry who were exposed to fire against their rear. On the allied right, late in the piece the French did attempt to send some troops around the flank against the objective at Seidnitz, but this was too little too late, as by then the Russian heavy cavalry was there to counter this. Added to the mix were some lethal allied firing and combat dice at a couple of crucial moments, wiping out potent French cavalry formations.

Real-world fatigue on the French side meant we couldn't play the last turn, so "at that point we called it": Mark's assessment as umpire was that it would probably be an allied win, though with a reasonable possibility that the French might have taken enough objectives to salvage a draw. Given what I think was a decent allied plan plus some help from the dice, that seemed a fair result.

Claustrophobia! The high troop density provided a very different feel from more open battles. With so many units packed into a narrow frontage, the French especially suffered from masking their own guns and struggled to attack out of the difficult terrain of the city in anything like a coordinated manner. Whenever either side attacked, instead of sweeping manoeuvre and knockout blows, it was more like two boxers in a clinch exchanging repeated body-blows. Every attack left the attacker disrupted and vulnerable to a counterattack, and the troop density meant there was usually a second enemy line ready to deliver one. Real punch and counter-punch.

Despite the compressed front line, the nuances of terrain and different troop types meant there were still plenty of tactical decisions to be made. It was pleasing that BBB produced the right level of granularity to achieve that but still fight a big-picture grand battle.

Guns that aren't firing are guns wasted; putting them in the right place to start with is crucial. Napoleon was an artilleryman. He knew.

The fog of war of remote gaming. Colin overlooked units that were behind houses. For our part, a couple of times Graham and I advanced our cavalry into range of enemy guns that were off-camera. These were minor frustrations that actually enhanced the game in a sense, in that such blunders are a feature of real battle and it is more realistic than our usual perfect 'helicopter view'.

The time-inefficiency of remote gaming. With Mark having to dance around the table carrying out moves for all of us one at a time, and having to explain what we could see or do, it took us two evenings to not quite finish a game that could comfortably have been concluded in a single session if we'd all been round the table. But it's still way better than no game at all.

How nice to have a battle where you legitimately field the entire Imperial Guard! (Mind you, they were seen off by my iron Landwehr.)

Great game, very atmospheric. Big thanks to Mark for laying it on.

If you enjoyed this AAR, you can use the 'Napoleonic' label on this blog or search by year label (e.g., '1813') to find reports of our other Napoleonic BBB battles.