Sherlock Holmes and the Wicker Man

And now for something completely different ... as if our recent post-apocalyptic diversion into the Gaslands were not fantastical enough, this week Bruce's talented pen brought us some alternative Victorian SF/Fantasy in the form of his scenario for 'Sherlock Holmes and the Wicker Man'. I trust I don't really need to introduce the eminent detective, Holmes, but some readers may not be familiar with the classic horror movie, The Wicker Man. The film is about a Scottish isle whose inhabitants still cleave to old pagan ways, including the occasional human sacrifice to ensure rich harvests. In Bruce's spin on the plot, Sherlock Holmes is on the island in disguise, investigating the islanders' misdeeds, and summons his sidekick Dr Watson urgently, who arrives with five policemen. These valiant few have to sneak/fight their way past/through Lord Summerisle and assorted henchmen and villagers to rescue a captive from being burned in the giant wicker man.

Bruce's time in lockdown was not entirely wasted. His brush is as talented as his pen and he unfurled a splendid layout for our eyes to feast on. The ruleset was Osprey's "A Fistful of Kung Fu", which apparently uses the engine from the "Song of Blades and Heroes". SBH I was faintly aware of, AFKF I had never heard of, the rules engine I had never encountered but a jolly clever one it is. The basic mechanisms were easy to grasp; we learned their tactical subtleties as we went along.

Mark J and I found ourselves on the side of the old gods and their Hebridean worshippers. Dave T and Nigel were the forces of law and order and civilisation. I'll let the photos tell the story. 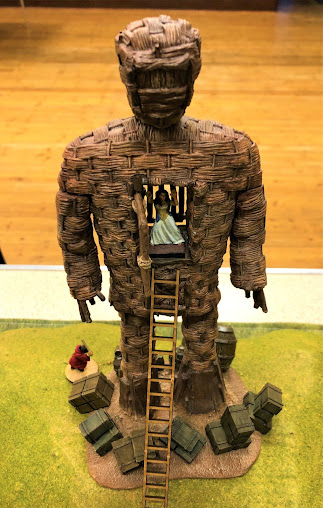 The magnificent Wicker Man complete with hapless 28mm maiden trapped inside him and bonfire piled up around him, cultist poised to light it. The Wicker Man is well over a foot tall. 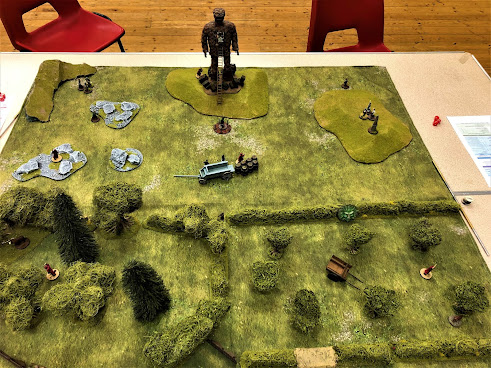 The table seen from the point of view of Watson and the approaching bobbies. They had to get through the wood or orchard, past a couple of dozy cultist sentries. All the other enemies were busy with their pagan ceremony until the alarm was raised. 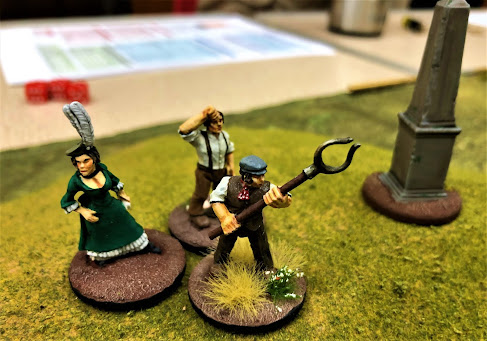 Some of the islanders. Could that master of disguise, Sherlock Holmes, be one of these? That one on the left looks dubious. Fine paintwork by Bruce. 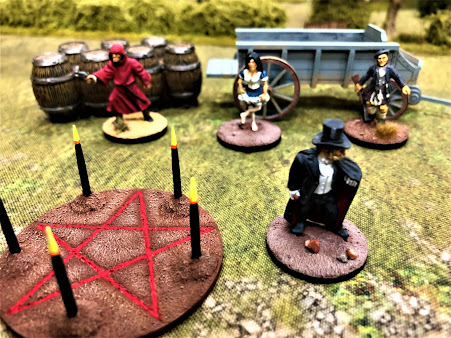 Lord Summerisle conducts his pagan ritual, backed up by a cultist, his alluring sidekick Willow, and one of his three gamekeepers, oblivious to the policemen sneaking through the trees behind them ...

A big punch-up ensued around the central wagon. Watson perished there, as did a couple of coppers. Willow was wounded but got away, luring a policeman after her. 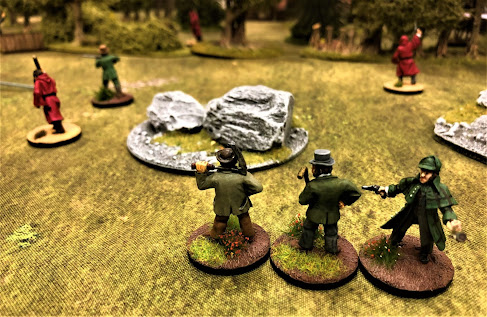 Holmes is revealed! He could easily despatch those two villagers, but he has more urgent business to attend to. He dashes towards the Wicker Man! He strikes Lord Summerisle to the ground! He scales the ladder and unties the damsel in distress! But ... 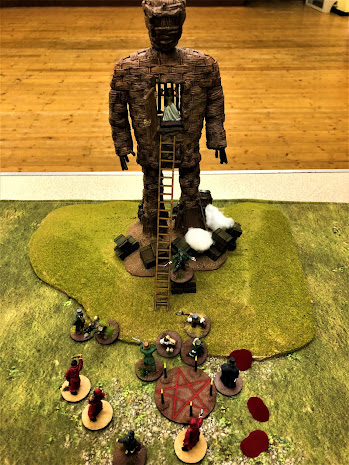 ... a welcome committee gathers at the foot of the ladder as flames begin licking up the Wicker Man's timber shins. All the police have fallen or scattered. Only the dastardly Summerisle and his cohorts remain. Holmes's chances of survival look remote ...

Thus the game ended in a triumph for the forces of evil, and Conan Doyle will have to either start writing about a new character or resort to penning prequels. There will be a bumper harvest on Summerisle this year.

This was splendid good fun. From my (evil) side of the table it did seem like too hard a job for the goodies, so maybe Bruce will tweak it a bit before its next outing. (For another outing there must surely be - too much work has gone into the Wicker Man not to use him again!) But the game was at least as much about the journey as the destination, and a thoroughly entertaining ride it was. Bravo, Bruce!