Having enjoyed Vincent Tsao's Marengo scenario at our last club outing, we gave another of his scenarios a run at the club this week, this time from the American Civil War: Champion Hill (16 May 1863).

This gave Dave W a chance to get his 10mm Pendraken ACW troops onto the table. We chose sides by the expedient of who was wearing what - Dave and Bruce were both in blue, which made them the Union, leaving me and Colin as Confederates (though it would be a stretch to describe my red T-shirt and Colin's camo pants as 'butternut').

Champion Hill was a small but important action. It was Grant's seventh attempt to reach Vicksburg so as to cut the Mississippi. Hitherto he had been thwarted by Confederate fortifications and raids on his supply lines. On this occasion he broke through, inflicting heavy casualties and fragmenting the Confederate army, enabling him to establish the siege of Vicksburg. 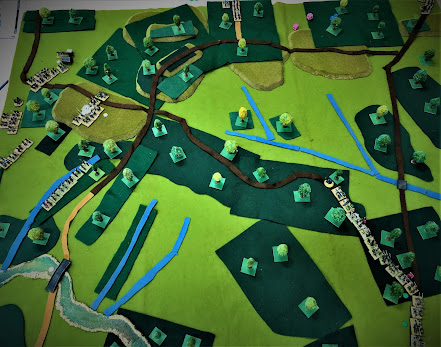 Fortunately for the Confederates, historically McClernand (facing their front with his XIII Corps) was very slow to get off the mark. The scenario limits how close to the enemy XIII Cps units can move initially. This gives the Rebs a brief window in which to fend off the flank threat and even turn the tables by pouncing on the Union supply column at Champion House. Whether or not they manage to do that, the second half of the battle will see Union weight of numbers turn it into a fighting withdrawal towards the road exits to Vicksburg and an effort to prevent the Union getting troops down those roads. 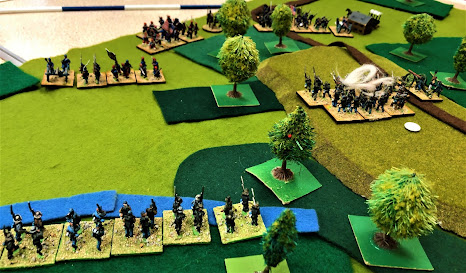 We weren't able to fend off the flank threat. That's not entirely true: it did take the Union three turns to kick us off Champion Hill. But we lost a lot of troops trying to hang onto it, and the dice were cruel to us. Dave's long range artillery threw consecutive 11s to smash Buford's brigade as it hastened north towards the Hill, rendering it Spent and of negligible combat value. On the Hill itself, despite getting a second battery up there and moving S.D. Lee and Barton's brigade to enfilade the decisive Union assault, we couldn't repulse it: with two shots at firepower of 16 and 20 (pretty lethal in BBB terms), I rolled 4 and 3 - enough to Disrupt the bluebellies but not stop them. 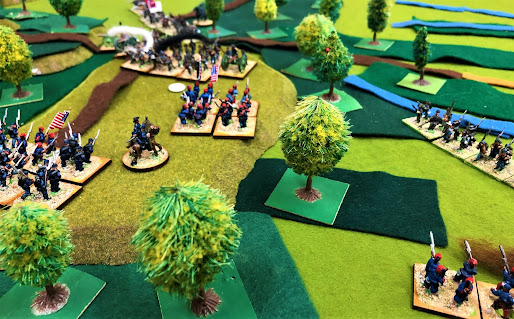 And now a view from the Union side a turn or two later. The Union troops have got onto the hill and driven back the Confederate infantry who are Spent and Disrupted. They are flanked by two batteries now, whose canister should have kept the Union at bay a little longer, but it was not to be.

Our most potent unit, Bowen's division, did attempt to get back on the Hill but failed. Lee and Barton had two chances to overrun Stevenson's weak brigade on the Union extreme right and open the way to the Union wagon train, but here too the dice let us down. Stevenson survived long enough for reinforcements to join him and the window slammed shut. 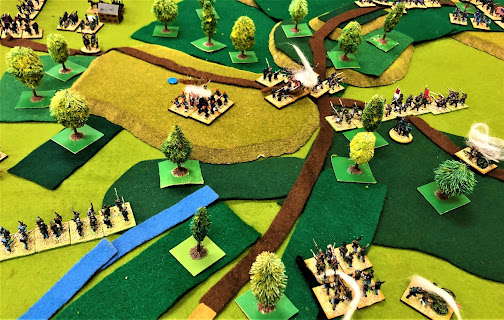 That was around Turn 5. The battle was pretty much over in the north at that point: the Union had Champion Hill secure and its wagons untouchable, but Bruce saw no realistic chance of taking the bridge across Baker Creek, only the risk of excessive casualties from trying. 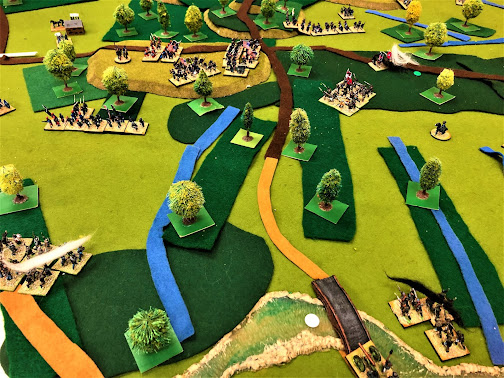 Game end on the northern part of the field. Battered Confederates falling back to hold Baker Creek bridge; Union not bothering to pursue them seriously.

In the southern sector it was a different story. All that was between McClernand and the Vicksburg road exit was Tilghman & Featherstone and a few guns. Three Union divisions converged on them, driving them back. At the start of Turn 7 we calculated that two successful assaults could see the Union achieve the road exit objective. Turn 7: two Union divisions assaulted; one was repelled by fire, but the other smashed the Confederates back 9" with loss and exploited 6" after them. Turn 8: the pursuing division needed to repeat its performance. It succeeded in charging; it shrugged off the feeble defensive volley; it won the resulting assault, forcing the rebels back another 3" - but not quite off the table. One more pip on the dice would have done it! A real knife-edge finish and a great way to end the game. 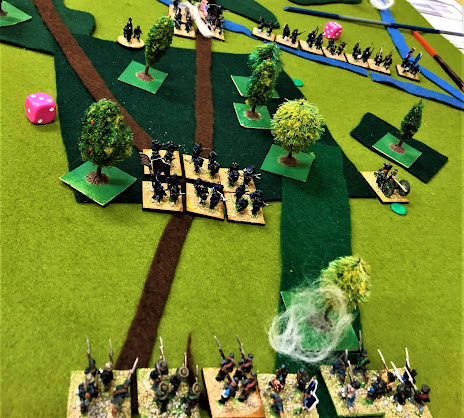 While the action petered out in the north, it hotted up in the south. Initial stand-off gave way to long range firefight and then to close assaults. Here the rebels have been driven out of their protective woods and cling on to the last inch of table to deny the Union another objective.

Objectives-wise, both sides held one (Champion Hill vs the Baker Creek Bridge). The Union hadn't quite got off the road exits, but the rebels hadn't hurt the Union supply column. The decisive factor was casualties: the Union had inflicted more than double its own losses. Consequently the game was a Union victory.

The virtuous simplicity of BBB: Bruce had not played since February 2019, yet he picked the rules up again immediately, no brain pain or fumbling and stumbling.

Vincent's Victory Point scheme was a little complicated for us (4 VP for this, 5 VP for that, a VP per base for the other); could probably be reduced to a more standard simple BBB format of 1 per objective achieved. But it worked as is.

Victory can rest on small margins. Whether or not an individual unit reaches a crucial location in time; whether a particular assault succeeds or fails; how effective a single volley happens to be ... the result of the whole battle can turn on any one of these. Although we Rebs lost (and felt very battered), it was easy to see how the boot could have been on the other foot.

10mm is a great scale for achieving that 'mass battle' visual effect with figures that are still large enough to be easily identifiable.

The imperfect symmetry of ACW: although the blue and the gray use the same limited array of weapons and tactics, and although the uniform variations are relatively few compared with contemporary European armies, the opposing armies were not bland. Our small forces had enough nuance and difference (some Aggressive units, some Fragile, some Passive, the whole range of Raw/Trained/Veteran) for there to be significant tactical choices arising and flavour resulting.

A big thank you to Vincent for another fine evening's entertainment!

The scenario is freely available in the BBB group files.