Our Hungary 1848 campaign progresses. Isaszeg (6 April 1849) was one of the largest and most important battles of the war. It drove the Austrian army back into Budapest, leaving the Hungarian army free to relieve the vital besieged fortress of Komarom. The Austrian C-in-C paid for his failure by being recalled and replaced.

This scenario has been well tested before. We rolled out the battlemat and it delivered again. It took one and a half evening sessions to fight (about four and a half hours).

The Hungarian attackers chose not to drive straight toward the objectives in the centre. Instead, they opted for sweeping left and right hooks to minimise their exposure to the Austrian gun line on the dominating high ground. They were hindered by terrain as well as their own tentativeness. Thus their advance was slower than it might have been. They did crush a couple of Austrian outpost brigades, but the situation makes that almost inevitable. They managed to replicate history in exposing their centre to a devastating counterattack in the King's Wood. 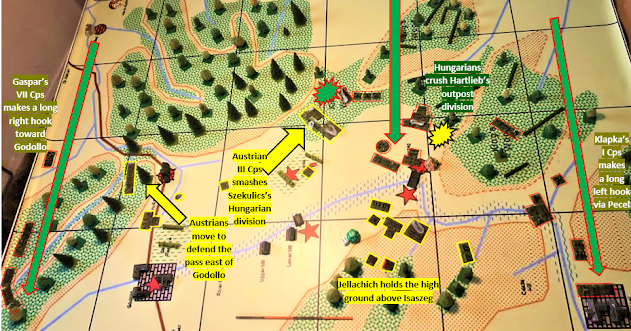 The situation at the end of Turn 6 (three turns to go). Looking east from behind the Austrian line.
Hungarian units outlined in red, Austrians in yellow.

At that point (Turn 6), things looked bleak for the Hungarians. Both their outflanking manoeuvres were bogging down in marshes or among steep wooded hills. In the north, they had succeeded in bringing VII Cps reinforcements onto the table, but the Austrians had summoned a tough grenadier brigade to counter them. In the south, Klapka's flank march looked unlikely to arrive in time. In the centre, Liechtenstein seemed about to overrun their gun line. 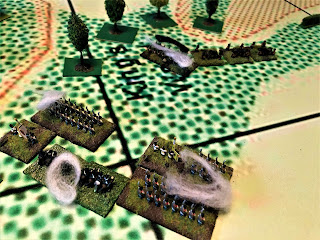 Aftermath of Liechtenstein's assault into the King's Wood. Disordered Austrians consider exploiting their success to roll over the remnants of Szekulics's division and the Hungarian batteries.

But by counterattacking, the Austrians exposed themselves to a counterblow in return. While they milled around in the woods, the 9th honved battalion (the 'red kepis') led a thrust against Liechtenstein's flank and rear, kicking a rocket battery out of the pivotal position in the vineyards. Similarly at Isaszeg, the Polish Legion led the charge across the bridge and could not be driven back again. In the north, Kmety's lead battalion emerged from the hills to capture Godollo, which the Austrians had carelessly left unguarded. 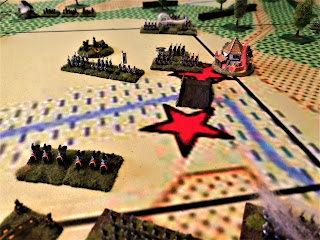 Isaszeg bridge: Polish Legion and Austrian cuirassiers eye each other across the Rakos.

At the start of the last turn, then, (Austrian Turn 9), the Hungarians held four objectives, their victory target. Windisch-Graetz still had his potent cuirassiers and grenadiers available to counterattack. The cuirassiers crossed the marshy Rakos and charged, hoping to retake the vineyards - but were repulsed. All eyes on the grenadiers: and yes, they ejected Kmety from Godollo, retrieving the situation to achieve a draw.

Situation at game end. Hungarians hold three objectives: Isaszeg, the Isaszeg bridge (no Austrians within 3" of it), and the vineyards in the centre. Austrians hold the other three: the Lower Mill bridge, the Besnyo monastery and - newly recaptured - Godollo, for a a draw by the skin of their teeth.

- The variable reinforcements in the north added unpredictability without skewing the game unduly;

- Four objectives all being contested on Turn 9 made it anyone's game and an exciting finish;

- At one point the two Austrian players were exchanging secret messages via WhatsApp, but these were taking several minutes to go through, thus accurately reproducing the arthritic Austrian orders process;

- As one Hungarian player (Mark) commented afterwards, trying to go against the grain of the terrain can be costly. Games like this do show how terrain channels the action and shapes a battle;

- Although Hartlieb's outpost brigades were eventually wiped out, they did not die in vain: their sacrifice caused significant delay and disruption to the Hungarian advance. (And of course, very few of them really 'died', they just routed across the Rakos);

- Players again remarked on how helpful the battlemat is for ease of visibility via webcam;

Draft scenario is in the BBB group files as usual.