For the past few years I have been fortunate enough to have a regular January trip to the US. This always finishes with an intense weekend of gaming with a very fine group of American wargamer friends, as testified to by several enthusiastic previous blog posts.

However, undeterred, the guys decided to maintain the tradition. Last weekend, a couple of them got together in person as usual. A full schedule of battles had been drafted and circulated in advance. Those on the spot set up the games and ran them, and the rest of us dialled in. 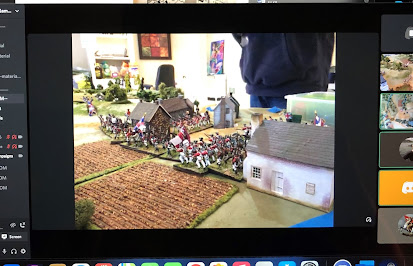 British redcoats march through Lexington. Right of pic you can see two other camera views of the battle (one a different sector, the next the overhead plan view) and then individual players' Discord feeds (video turned off during the game). Left of screen is where the team side rooms and game resource documents are to be found.

The first challenge was time zones. When you're all staying in the same place, you can play a game until it finishes, reset, start a new game when everyone's ready; party on into the small hours, crash at 3:00 a.m., reveille at 8, fuel up on fried breakfast and coffee, start the morning's game as soon as everybody's fit to fight ... but when players are in different countries 5 or 6 hours apart, setting definite start times and accommodating people's 'hard stops' becomes more important.

What it boiled down to for me was that I got to play one game for 8 hours or so from 2:00-10:00 p.m. on Saturday, then another smaller one for three hours on Sunday afternoon, both of these being the morning engagement for the players physically around the table.

The technological set-up was pretty sophisticated (much more so than my simple laptop camera arrangement I reported on in my previous post). As far as the physical apparatus was concerned, to provide a top-down plan view of the whole battlefield, Scott lashed a webcam to a TV studio microphone boom; two other cameras (iPads in cradles) could be moved around the battlefield to give close-ups of where the action happened to be.

The software platform we used was Discord. This supports video and voice. Importantly, it lets the receiver choose any camera for the main view, while the others remain visible as smaller views. It has some other features which were really useful for the games. The gamemaster can post resources in Discord such as scenario briefings, orders of battle, quick reference sheets etc, where they are readily accessible to players. He can also set up side rooms for each team of players, so that eg the Sudanese players can go to their side room and talk or text to discuss plans or hidden movement without the British players hearing what is being said. The text is also handy for other things, for instance as a place to record secret decisions one side might have to make, for future reference.

As for the two games, briefly:

This was a reprise of the terrific American Revolutionary War scenario we played 5 years ago using Muskets & Tomahawks. This time it had been adapted to play with Black Powder. Inevitably, I got nobbled to be the British, because I speak the language - the King's English, that is. It always adds considerably to my American comrades' enjoyment to have me put on my best British officer voice. I can also contribute the odd idiom from the other ranks: "You're 'aving a giraffe, sir", upon failing an activation roll, generated particular hilarity. Just as well I scored some points on the linguistic entertainment front, because our British expedition was doomed militarily. It took us 17 of the 18 turns to score our first Victory Point, by which time the Yankees had racked up 30. ("We'll call it a draw, then ...") Scott did suggest post-game that the translation from M&T to BP wasn't quite calibrated right and the unit stats were too skewed toward the Americans. Perhaps so; perhaps we were hurt more by the ace of spades being drawn on Turn 2, meaning a ton of American troops were activated so early that we never got through to Concord. Whatever - it was a spectacular game and a lot of fun.

For the Sunday game we changed continents and centuries to Africa 100 years or so later, where the British were fighting a different colonial campaign, this time in the Mahdist War in the Sudan. The scenario was based on one in Tim Tilson's book, "The Gordon Campaign", but adapted for use with "The Men Who Would be Kings" rules. Having spent Saturday attacking, I was ready to do some defending, so I opted to play for Osman Digna's team. Discord's secret chat channels came into their own, as we Sudanese got to use hidden deployment and hidden movement. I had a merry couple of hours of chucking spears, sniping at expensively-educated cavalrymen, and charging out to stab some unlucky jocks. ("They don't like it up 'em, sir.") Unfortunately my time ran out, but happily Nick dialled in at a convenient moment, so he took over. I think it ended badly for the Sudanese, but again, it doesn't really matter - it was about the journey more than the destination.

No remote event was ever going to match the fantastic in-person get-togethers we've had over the years, but this was a pretty good substitute. Naturally we drank a remote toast: to good friends and great gaming.