The fighting withdrawal is notoriously one of the most difficult operations in war. Typically, a small rearguard is tasked with holding off a larger pursuer, while the withdrawing side's main body makes good its escape. Normally the rearguard itself wants to escape as well - rarely is it a case of sacrificing it to the last man - and often it is better to fall back fighting through a series of blocking positions, rather than gambling everything on one single glorious but doomed last stand.

This kind of situation offers tactical challenges a little different from the usual head-on confrontations I see on wargame tables, with more emphasis on time and space equations and less on concentration of force. I have fought some fighting withdrawals - Beaumont in the Franco-Prussian War comes to mind - but they deserve to feature more. 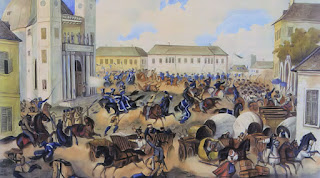 Russian lancers get into Vác

A fighting withdrawal featured on my table this week. I have almost completed a set of scenarios for a dozen or so of the largest battles of the Hungarian War of Independence of 1848-1849. One action which was not on my initial list was the Second Battle of Vác: it didn't seem quite big enough or bloody enough to merit BBB treatment. However, as I read more about it, I changed my mind: not only was it quite an important engagement in terms of the course of the war, but also it had the potential to provide a very different and challenging game.

The strategic situation in July 1849 is that Hungary has been invaded by overwhelming numbers of Austrians and Russians seeking to crush the Hungarian revolution. Hungary has two main field armies. The one in the north, commanded by Görgei, has fought three battles around the great Hungarian-held fortress of Komárom, but now Görgei is trying to dash southeast to join the other Hungarian army in its entrenched camp at Szeged.

At Vác, Görgei's advance guard encounters a Russian advance guard intercepting him. They fight a small but lively action; both advance guards pause to lick their wounds, and there is a day's interlude while their main bodies catch up, everyone has a rest after a lot of forced marches, and Görgei deliberates. Should he stick with his original intended route and try to smash through the Russian army in front of him? Probably wisely, he decides instead to zag off northeast into the mountains and find a circuitous way round behind the Russians.

The retreat begins before dawn the next day. However, Russian cavalry patrols discover it is happening, get in among the Hungarians and cause some minor mayhem. The Hungarians are forced to attack southward and drive them off, but the Russian army has been alerted and launches a general attack.

One of the two Hungarian corps fights delaying actions while the other makes good its escape. A first stand is made south of Vác; then another around some bridges and high ground to the north of it. These defensive stands succeed in holding up the Russians, and the rest of the Hungarian force then gets away overnight.

Writing the scenario for this was a lot trickier than usual. My normal victory condition formula which revolves around holding a certain number of objectives at game end wouldn't work for this situation. Instead, I had to resort to four different types of objective:
- two locations the Hungarians need to take at some point but not hold at the end, just to provide the right motivation for their advance guard to attack early on;
- two locations mid-table that the Hungarians have to hold until turn 7, as a measure of how well they delay the Russians;
- two locations at the final defensive positions that they have to hold at game end;
- and also the Hungarians are penalized if they don't get enough troops off the northern edge.

(I also scripted in a scenario option to let the Hungarian player make a different choice from Görgei's and attempt to break through to the south, but that is rather speculative and untested.)

My buddy Nigel, who I haven't seen much of for a while because of his work, had a free evening and we fought the battle. It proved to be a real brain-teaser for both of us. My problem as the Russians was that there is a lot of distance to cover and not many turns to cover it in - and there are Hungarians in the way. Fortunately, the number of Hungarians diminishes; Nigel's problem was how soon he could afford to start thinning out his defensive line, and which troops to pull back when.

The forces are virtually equal initially. The Hungarians have superior troop quality but the Russians have more cavalry and artillery. I foolishly squandered that cavalry advantage by getting a couple of brigades killed early on in the advance guard clash. When the main bodies came into action, Nigel then cunningly nullified what cavalry I had left by advancing a couple of his units against them; this was a risk as it left him with barely enough troops able to withdraw off-table. I was trying and failing to construct a grand battery to exploit my artillery superiority and support my infantry steamroller. Despite my tactical errors, the steamroller did grind forward, punching holes in the now very thin Hungarian line. I hadn't moved quickly or cleverly enough to threaten the intermediate position, but I did get in sight of the final position, and had a couple of dice landed differently … but they didn't, my infantry ran out of puff and I ran out of time. I still had hope, as Nigel had to get a flurry of units off the table edge on the last turn, and it would only take a couple of bad rolls … but no, his skilful generalship was not to be undermined by the injustice of bad luck. The Hungarians escaped, the Russian pursuers were not quick enough, and Nigel claimed victory.

We had the rare luxury of some time left after the game to contemplate and discuss the battle. We agreed it presented refreshingly different challenges and problems for both sides. It also gives options: we could see different ways we could approach the challenge next time.

Having been defeated, I joked with Nigel that the obvious conclusion was that the scenario must need tweaking. But actually, given how difficult it was to design the scenario and the victory conditions, the fact that I had a chance of victory on the last turn as well suggests it is gratifyingly well calibrated already. I will play it again before embarking on any misjudged over-correction. For now, I reckon it is good enough to post the draft in the BBB Yahoo group files as usual.

Email ThisBlogThis!Share to TwitterShare to FacebookShare to Pinterest
Labels: 1848, 1849, Hungary