I had the pleasure of a return to the Guerriers du Marais, in Carentan. This time the guys had asked me to run an introductory game of "Check Your Six!" WWII air combat for them. As Pierre rightly put it, CY6! is a game that is simple to play but difficult to master. Its mechanisms are simple and elegant, but it is a kind of simultaneous 3D chess, and it takes some practice to get your head round how your plane maneuvers and how your options interact with the enemy's likely moves. I therefore followed some good advice from the CY6! Yahoo group (from Brian Cantwell, IIRC) and ran a short "flight school" session before getting stuck into a proper scenario. The flight school consisted of me chugging some unescorted bombers straight and level, while Pierre and Jean-Louis tried to fly their fighters into position to shoot them down.

After 5 turns or so, one of Jean-Louis's planes had gone in completely the wrong direction and missed the fight, but his other had shot down a bomber. We agreed they had got the hang of the basic mechanics and were ready for action. Since we were in Normandy, I had written a scenario that could be the first in a campaign to recreate the career of the famous "Normandie" squadron, later the "Normandie-Niemen" regiment, that served in the Red Air Force on the Eastern Front. I flew two Fw-190s against Pierre's and JLF's four Yak-1s, escorting two flights of Pe-2 light bombers. 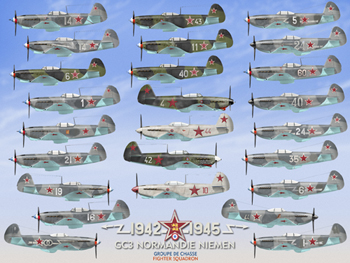 If you want a Normandie-Niemen screensaver, here is where you can get one

The game developed conveniently into two fights, as one of my Focke-Wulfs took on Jean-Louis and the other Pierre. The scenario balance seemed just right. As usual in air games, the "Lucky Hits" helped to generate interest / excitement / hilarity. In particular, just after claiming his first ever Pe-2 kill, my green pilot copped a lucky hit that started a heavy fire and caused him to panic. It ended badly for him. His more experienced oppo damaged a Pe-2 flight leader. As the enemy bombers closed in on their exit edge towards the target, it came down to who would get lucky on the last turn. I needed to finish off the damaged bomber to have a chance of a win. Success: I chalked up another kill. But three enemy planes had me in their sights. A damage result would level the scores, and a kill would win it for them. The dice were with me - they all missed, my pilot got away, final score 16:13 to the Luftwaffe.

This was an entertaining game and showed why CY6! is such a success at US conventions. It's so easy for players to pick up - even when the referee is explaining the rules in badly mangled French - and produces the right ratio of challenge and excitement to brain pain. If you've never tried CY6!, if you're interested in WWII air combat or even if you just like a fast and fun skirmish-type game, I recommend you give it a go.

A fourth Guerrier du Marais, Christophe, turned up with perfect timing just as we were wrapping up our air battle. He and Pierre had planned a small game of Bolt Action, while Jean-Louis was keen to try "Bloody Big BATTLES!" for the first time. The "training scenario" I always recommend for BBB is Montebello (1859), so that's what JLF and I did.

In no time we were set up and ready to go. Turn 1 was a debacle for the French. JLF's dice stank and his troops barely moved, while my supposedly ponderous Austrians stormed forward in perfect order and got immediate reinforcements. We treated this as a practice turn to learn the mechanics, reset, and started again.

This time things went more according to script. Sardinian and French assaults made my Austrians hesitant and bought time for the rest of the French to arrive. Nonetheless, Austrian numbers began to tell. On Turn 5, while fending off French attacks on Foliarina, I broke through the French right and captured Genestrello. It was looking like a comfortable victory for me, especially as a fortuitous Austrian reinforcement unit turned up right where it was needed, along the main road. But JLF was not to be deterred. On the last French turn, Turn 7, two of his regiments renewed their attack and seized Foliarina. A third, having gloriously repulsed an arrogant and incautious assault by my troops from Genestrello, drove them back and retook the village. At this point, with the French holding 3 of the 4 objectives, he was on course for a French win. Austrian Turn 7, and of course I had to counterattack both Foliarina and Genestrello. I got the good dice I needed, the French in Foliarina were pincered and ejected. At Genestrello, my men charged up the hill again for the final decisive combat of the game. We rolled our dice - result tied - both sides lost troops, and we had to fight another round - the tension mounted - the dice favour Jean-Louis, the Austrians tumble back down the hill, and their glorious resistance at Genestrello earns Jean-Louis's French a draw!

As usual, Montebello produced a really exciting close game, and an honourable draw was the perfect result. We had all had a great day, and it was a joy to introduce my friends to two new games, CY6! and BBB. The Guerriers du Marais have a wide range of interests, and regularly try out new rules and buy new figures, so like most of us gamers their problem is not shortage of good games but limited occasions to play them all. Next visit perhaps I will be playing Bolt Action or Dead Man's Hand again, or To the Strongest, or whatever the flavour of the month happens to be ... but good games in good company is a good recipe.

And to wrap up a great day, to continue the air combat theme, I watched "Tora! Tora! Tora!" for the first time. What a terrific movie! Lots of kit on display, some fantastic scenes, and pretty good history as well. Must try a Pearl Harbour CY6! scenario some time ...


(Running tally: as both the day's games were really tutorials, I'll leave them out of the stats for the year.)

Email ThisBlogThis!Share to TwitterShare to FacebookShare to Pinterest
Labels: CY6