From Famine to Feast!

For various reasons I have endured a month without a wargame. My dice-rolling muscles have atrophied from disuse. My faculties have been starved of their usual stimulation. Unable to play a game, I was reduced to writing about game design and provoking debate.

This week the drought ended. I made up for lost time with four excellent games in five days. Happy happy joy joy.

Monday: The Washing of the Spears
Plan A was that Garry would lay on a Spanish Civil War skirmish. This was thwarted by his dog-sitting responsibilities. But surely, I said, surely dogs can be moored to a post outside the village hall for a couple of hours? Not these mollycoddled beasts, came the reply. Get a cat, say I.

Happily Bruce had Plan B in the form of his magnificently painted Zulus and their redcoated foes. We spent a happy evening on the northern flank at Isandhlwana, him conducting sustained volley fire, me recycling figures until the fourth wave of Zulus overran the last of the plucky Brits. He'd had his fun, then I had mine. Bruce's rules are slick and quick and produce the right effects with suitable flavour. And his 28mm figures really are gorgeous. Tuesday: Waterloo v1.0
A proper Bloody Big Battle. This was the first playtest of the Waterloo scenario we have created for the planned display/participation game at the Soldiers of Oxfordshire Museum on 24 October. (Full draft of the scenario in the BBB Yahoo group files as usual.) Six players turned out to be the ideal number, as the battle resolved itself nicely into three fairly distinct fights left, right and centre. It pivoted like a classic linear ancients game: the French left had outflanked and then taken Hougoumont and made good ground beyond it, but the French right was being driven back on Plancenoit by the combined efforts of the Prussians and some outstandingly gallant Dutch-Belgians and friends. Much exciting to-and-fro and ebb-and-flow, and an honourable draw.


D'Erlon's corps advances against La Haye Sainte.
"They came on in the same old way ..."

The players were pleasantly surprised by how well BBB works for Napoleonics, given that it is designed for the wars of half a century later. Before the game some were questioning whether a simple "Aggressive" rating for heavy cavalry would adequately reflect their potency in this period. Three hours later the same players were commenting on how much impact the cavalry were able to make - because with 3" musket range, and no rifled artillery or breechloaders, it is much easier for them to charge around without being blown away. The game had a suitably Napoleonic feel and is very different from, say, a Franco-Prussian BBB battle.

Incidentally, in connection with the planned SOFO event, I came up with a way to engage with members of the public and help them to relate to and understand Waterloo. I took a map of the campaign and plotted the troop movements on to a map of Oxfordshire. Imagine Napoleon invading from Swindon and Reading towards Brussels aka Banbury. Oxford is the Quatre Bras crossroads where Ney is stalled. Napoleon hits the Prussians at Wheatley (Ligny), trying to drive them back along their supply line to High Wycombe (Namur), but instead they fall back northwards upon Bicester (Wavre). The Anglo-Dutch forces scattered around Cheltenham and Stow-on-the-Wold join those retreating from Quatre Bras and unite at Woodstock (Waterloo). 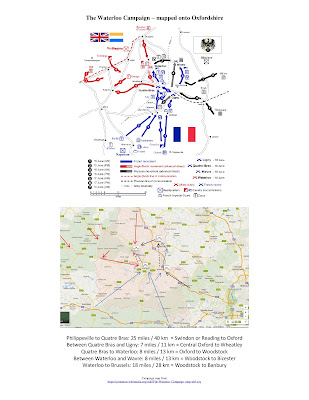 
Wednesday: Indian Takeaway
Mark treated me to Maharajapore, where my East India Company / British forces took on his Marathas in the Gwalior Campaign (1843). This is one of the BBB scenarios Mark is compiling for his planned "Wars in India" collection. These are battles, indeed entire wars that I know next to nothing about, so I am being educated as well as entertained.

As the Brits at Maharajapore I had the pleasure of hurling my troops against large numbers of entrenched Maratha cannon. I skilfully coordinated a masterly assault against the main Maratha position. Shockingly bad dice bounced me off at every point. A second attempt was successful but I had lost precious troops and even more precious time.

The Maratha army was Passive and ponderous but was gradually reacting, bringing up reserves and infiltrating round my flanks. With my smaller but more agile and better quality force, I was able to probe for weakness. I managed to pounce on and destroy a second Maratha artillery position. But time ran out before I could take another one, so I was narrowly defeated.

This was a really excellent game full of spicy tactical challenges. The scenario has plenty of manoeuvre, decisions every turn, and juxtaposes asymmetric forces. Great fun.

Friday: Waterloo v.1.1
Just three of us mustered for this second and last playtest before the main event at SOFO. Mark was well cast as a careful and skilful Wellington, while I played Ney to Anton's Napoleon. Our bold plan: to screen Hill and Hougoumont, while punching through the poorer quality Allied troops above Papelotte and driving on Mont St. Jean.

The screening worked fine, and we also seized La Haye Sainte on Turn 3. The punching was also quite successful, sending Saxe-Weimar's Dutch Belgians reeling out of Papelotte. For the driving part, Anton then committed the Guard against the 5th Division and the Hanoverians along the Ohain Road. These were smashed backward. Unfortunately we did not support the Guard's left. We had troops milling around in and near La Haye Sainte, but these failed to move up to protect the Guard, while at the same time causing an unholy traffic jam which masked our artillery from covering their flank with fire.

Wellington had not been idle, and some redeployed guns pounded the Guard from the front, while Clinton piled in on their left. Much as in the historical battle, the 52nd (Oxfordshire) Regt unleashed a devastating volley and then went in with the bayonet, shattering the Guard Chasseur Division.

On Turn 6, a concerted assault by Reille's corps against Alten above La Haye Sainte was unlucky to be narrowly repulsed. At that point we held two of the Objectives quite securely (La Haye and Plancenoit). But loss of the Guard cancelled one and meant we were losing. Reille was unlikely to reorder in time either to take Hougoumont or to give adequate support to take Mont St. Jean. The Allied line in front of MSJ was too strong to be breached frontally. There might just have been time and space for Milhaud and some of d'Erlon's troops to work round and take MSJ from the east to retrieve a draw, but it seemed improbable. We therefore conceded the game to the Allies.

Waterloo: it's a classic. After playing it twice this week I have more sympathy for Napoleon. He and Ney get criticised for not outflanking the Allied right; for devoting too much effort to taking Hougoumont; for uncoordinated and unimaginative frontal attacks. But actually the limited time and space make it quite difficult. I think Napoleon has options to weight his efforts left, right or centre, and any of the three could succeed. But it would need skilful handling and good fortune on the French side, plus probably some tactical errors and bad luck on the Allies' part, for the French to really beat the Allied army.

Looking forward to fighting it again at SOFO in October. Maybe some passing visitors to the museum will want to join in, don the cocked hat and show us how it should be done!