I did consider titling this post "Wars I'd Never Heard Of (Part 94)". But while technically true, in that until this year I was unaware of the November Uprising - or at least, if I had heard of it, I had long since forgotten - such a flippant title would have been unworthy for a year-long struggle that mustered armies of 150,000+ and resulted in many 10s of 1000s of casualties. 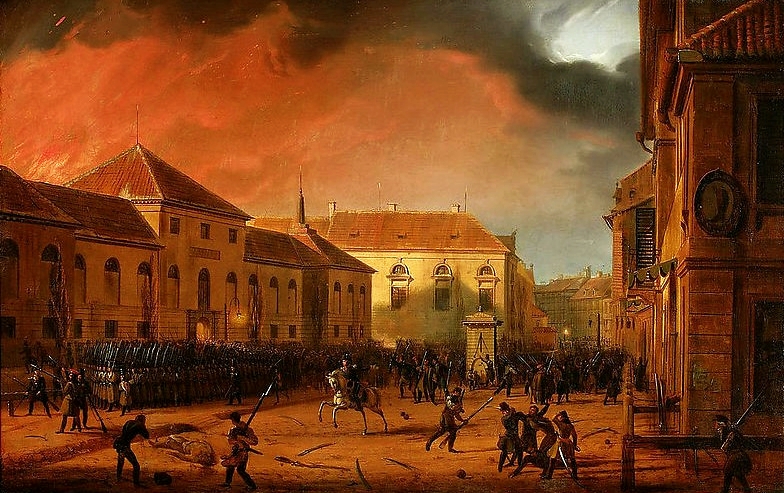 I owe my newly better-informed state to Geoff Coe, who asked me to help him to create scenarios to wargame the largest battles of the November Uprising using the "Bloody Big BATTLES!" rules. The project appealed to me so I agreed. Geoff has done marvellous research, and shared with me the fantastic resources he has collected, including full orders of battle, detailed accounts of the actions, and wonderful contemporary maps - in fact, all the ingredients you need to design a scenario.

The first outcome of our collaboration is a scenario for the battle of Ostrolenka (1831), in which 40,000 or so Poles resist an attempt by 50,000+ Russians to establish a bridgehead across the River Narew. As is so often the case, examining a historical battle has provided a complex, unique and fascinating situation to reproduce on the wargames table.

A range of 28mm figures for the November Uprising is in preparation by Steve Barber Models. This TMP link will lead you to previews of the first sculpts. Although BBB scenarios are normally intended for use with smaller scale figures, we have designed this one so that its 4'x4' can be scaled up to 6'x6', and movement distances and firing ranges scaled up by 50% as well. This enables it to be used with 50-60mm square bases bearing four 28mm figures each, making it compatible with the Steve Barber figures.

The scenario has not yet been playtested, but in order to let folks know about it - and about the figures in case you want to paint up an army for it - the draft scenario is posted on Flickr and in the BBB Yahoo group files.